ARCA: For the second year in a row, Mike Basham finishes last in the season’s second race

Mike Basham finished last for the second time in his ARCA Menards Series career in Saturday’s ARCA Pensacola 200 presented by Inspectra Thermal Solutions at Five Flags Speedway when his No. 69 Longhorn Fab / Kimmel Racing Ford fell out with clutch issues after 4 of 200 laps. It was his first since the 2018 Music City 200, 20 races ago.

Not much has changed at the Basham camp since we featured Mike almost a year ago. ARCA’s rule change to only allow steel-bodied cars at tracks under three-quarters of a mile has threatened some of the Basham family’s plans of their traditional schedule, but the family remains active in the series. According to The Pit Lane, the team’s focus has shifted away from fielding cars, although they may do that in the fall sometime at a short track. The collaboration between the Basham family and the Kimmel family is nothing new, as we chronicled after last year's Madison race. The Kimmel shop, however, is where things have changed. The team’s main sponsor, FASS Fuel Systems, did not return to the team, leaving team principal Will Kimmel scrambling for funding. Scott Melton stepped in to run half of the schedule, mostly superspeedways. Kimmel himself hopes to run a few events, such as his hometown Salem events. To fill in the gaps, it appears the team will continue to do what it did in 2018 – "start-and-park" to keep the car up in owner points and eligible for series bonuses.

ARCA did not release its preliminary entry list until February 26, and when it was released, it made waves for only having a dozen cars on the list. Series official Charles Krall said on Twitter he expected 24-26, and while it proved optimistic, it was close to where the entry list peaked, as 21 cars were entered by then. Connor Okrzesik made his debut with his family team, Corey Heim made his series debut for Chad Bryant Racing, Ty Gibbs made his first start with Joe Gibbs Racing and Tim Richmond (no, not that one) debuted in Wayne Peterson Racing’s No. 06 car, which has secured full-season sponsorship from Great Railing.

A host of drivers also made season debuts. Sam Mayer ushered in GMS Racing’s return to the series, Raphael Lessard made his first start since 2017, driving a second entry for KBR Development, and Matt Dooley and Dick Doheny made their season debuts, both with Fast Track Racing. Former Empire Racing development driver Kaden Honeycutt made his first appearance of the year and rolled out a family entry, which was assisted in setup and crew chiefed by racing veteran Jeff Spraker, who fielded a car for Dave Mader III at Daytona the past couple years. Tommy Vigh Jr and Chandler Smith also ran as part of scheduled limited-event efforts this year. Dale Shearer was also scheduled to bring his No. 73 down to Pensacola.

Doheny anchored final practice, his lap of 20.42 seconds (equivalent to about 88 mph) three-and-a-quarter seconds off of leader Chandler Smith’s lap. Smith led qualifying with a lap of just under 17 seconds, and while Doheny picked up the pace to a 20.2, it was his Fast Track teammate Matt Dooley who trailed the field, running a lap of 21.079 seconds.

Like many ARCA Menards Series races, the last-place battle for the ARCA Pensacola 200 was done within a few minutes. Basham pulled off the track after four laps. Doheny made seven laps before turning into the garage with rear end issues. Fourteen circuits later, Dooley took a trip behind the wall with handling problems. Carson Hocevar made an early exit with fuel pump mishaps, and Brad Smith made 47 laps before overheating to round out the Bottom Five. 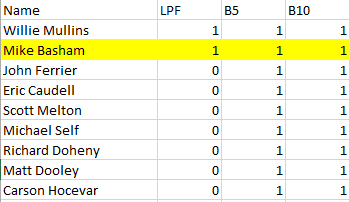 I just love reading these ARCA LASTCAR blogs, so fun seeing a lower series get some love.