Stephen Leicht picked up the 4th last-place finish of his NASCAR XFINITY Series career in Saturday’s Racing Experience 300 at the Daytona International Speedway when his #01 OPAV Experience It / BTX General Logistics Chevrolet fell out with overheating issues after he completed 24 of the race’s 120 laps.

The finish, which came in Leicht’s 100th series start, was his first in the series since last fall at Dover, five races ago. In the XFINITY Series, it was the 15th last-place finish for car #01, the 33rd from overheating issues, and the 520th for Chevrolet. Across NASCAR’s top three series, it was the 32nd for the #01, the 171st from overheating problems, and the 1,641st for Chevrolet.

Last season saw Leicht run 17 of the 33 XFINITY Series races, his most since 2007. This time around, he drove for four different teams. He began the year teamed with Josh Bilicki at the start-up JP Motorsports team. He began the year with a season-best 15th in the Daytona opener, but parted ways after the season’s tenth round in Dover. A one-off for RSS Racing yielded a 39th-place finish at Iowa, then he ran the August events for Mike Harmon with a best of 31st at Bristol. He then closed out the season driving the #99 Chevrolet for B.J. McLeod, returning to the “start-and-park” doldrums that have plagued his career.

Leicht’s new ride at JD Motorsports promises to be his first full-time effort in the series since the same 2007 season, when he was a development driver for Yates Racing. The team’s best finish of 2018 was a 14th at Darlington with Landon Cassill, one of only two starts for the Cup regular. Curiously, Cassill came aboard after the team’s full-season driver Vinnie Miller was released late in the season, and followed Leicht to B.J. McLeod’s team.

A second NASCAR-mandated field reduction in six years made Saturday’s race the first time only 38 cars started an XFINITY Series race since June 21, 2014, when Kevin Lepage exited on the first lap at Road America. As it happened, exactly that many cars arrived in Florida to qualify for the event, meaning no teams were sent home. Leicht ran 26th in opening practice and ran 16th of the 22 who braved Happy Hour. He qualified 23rd with a speed of 184.22mph (48.854 seconds).

Starting in the last spot was Cole Custer, who put up the slowest lap in qualifying, then incurred a redundant tail-end penalty for an engine change on his #00 Jacob Companies Ford. Joining Custer at the back was polesitter Tyler Reddick, whose first start in Richard Childress Racing’s #2 Pinnacle Financial Partners Chevrolet began with a flat tire found after time trials. The same issue befell Max Tullman in Motorsports Business Management’s (MBM) #13 Zoomi Toyota.  Also falling back was Jeremy Clements, whose new-look silver #51 RepairableVehicles.com Chevrolet had unapproved adjustments.

A ragged start caused the back half of the field to unspool quickly into several broken packs of single-file traffic, allowing both Reddick and Custer to gain 17 spots in just three laps. By the end of Lap 2, the last-place runner became the #42 James Carter Attorney / CrashClaimsR.us Toyota driven by John Jackson.

Jackson’s entry in the #42 would have been unthinkable before last year’s turbulent offseason. At season’s end, the number belonged to Chip Ganassi Racing’s XFINITY Series program, which was to be Ross Chastain’s full-season ride for 2019. But the fallout from the FBI’s raid of team sponsor DC Solar’s headquarters changed all that, causing the team to shut down. The number was then picked up by MBM, which tabbed Jackson to drive.

By Lap 5, Jackson was last by 15.228 seconds behind the leader, nearly a second back of his teammate Tullman in the #13. Jackson caught Tullman’s draft, and the pair linked up with fellow underdogs Mike Harmon in the #74 Air One Heating & Cooling Chevrolet and group leader Matt Mills in B.J. McLeod’s #5 J.F. Electric Chevrolet (the result of a number swap with JR Motorsports, who acquired the McLeod team’s #8). On Lap 22, with eight laps to go in Stage 1, the single-file group was running the inside line headed into Turn 3 when the leading single-file draft caught and passed them up high. By that time, Leicht was two laps down.

According to Racing Underdogs, Leicht came down pit road for a missing power steering belt, which made the car virtually impossible to drive on the superspeedway. David PeQueen reported smoke from the pipes, as shown in his photograph, which signaled the overheating issue that ultimately sent the #01 behind the wall.

Finishing 37th was Cup regular Brad Keselowski, who was out due to a likely first in NASCAR history – a roof hatch issue. From the early laps, Keselowski’s #12 Fitzgerald USA Ford had an issue with the edge of his roof hatch coming up at speed. Despite several attempts at repairs, the issue couldn’t be resolved. The flap finally came off around Lap 69, drawing a caution soon after, and the resulting damage forced the #12 to pull behind the wall.

The only other retiree was Jeremy Clements, whose new-look #51 RepairableVehicles.com Chevrolet had engine issues as early as Lap 37, then exited after 90 circuits complete. Harmon’s #74 spent several laps behind the wall after his crew had to push-start the Chevrolet on pit road, ultimately finishing 35th.

Rounding out the group was Gray Gaulding’s new ride in SS-Green Light Racing’s #08
GGPure.com Chevrolet. Gaulding's day took a brief detour when he spun out in his pit stall, and PeQueen's photo caught damage to the left-rear corner where the TV panel had become separated.

Enjoying a fine run on Saturday was LASTCAR all-time leader Jeff Green, who worked his way up to the 6th spot with 34 laps to go, ultimately settling for 7th. Caesar Bacarella had a very fast car under him in his first start for Mario Gosselin’s DGM Racing, running inside the Top 10 early, and was still running there until he hit the Turn 3 wall with just three laps to go.

LASTCAR STATISTICS
*This marked the first last-place finish for car #01 since this exact race three years ago, when Ryan Preece’s Uptick Vineyards / YouthRanchers.org Chevrolet was eliminated in a crash after 5 laps of the Powershares QQQ 300. Preece is now the driver of JTG-Daugherty Racing’s #47 Chevrolet, returning to the Cup Series for the first time since 2015. 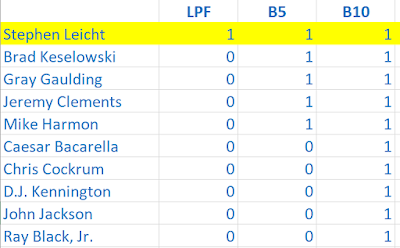