Natalie Decker picked up the 1st last-place finish of her NASCAR Gander Outdoors Truck Series career in Friday’s NextEra Energy 250 at the Daytona International Speedway when her #54 N29 Technologies Toyota was eliminated in a bizarre crash after she completed just 1 of the race’s 111 laps.

The 21-year-old Decker began racing go-karts when she was nine, and turned her attention to working her way up the ranks of stock car racing. A competitor in both NASCAR’s Drive for Diversity and the Alan Kulwicki Driver Development programs, Decker has cut her teeth in ARCA, claiming Rookie of the Year honors in the ARCA Midwest Tour, then finishing 11th in her ARCA Menards Series debut at Toledo in 2017.

Driving for Bill Venturini and carrying sponsorship from Wisconsin startup firm N29 Capital Partners, LLC, Decker’s best finish in ARCA have been a pair of 5th-place runs last year at Daytona (where she won the pole) and the Elko Speedway. She nearly improved on this run in her return to Daytona just last Saturday, when she finished 6th.

Friday’s Truck Series race would mark Decker’s debut in NASCAR’s top three national touring series. She’d once previously attempted to make a Truck Series race three years ago, missing the cut at Martinsville in a one-off effort for MAKE Motorsports. Her cousins Claire and Paige both made the race, finishing 27th and 25th in the 32-truck field.

Late last season, it was announced that Natalie Decker would drive part-time for David Gilliland’s two-truck operation, DGR-Crosley, in addition to three ARCA starts at Daytona, Talladega, and Charlotte. On Friday, Decker would drive the flagship #54 entry at Daytona with Gilliland himself in the #17. Decker began the weekend 16th in opening practice, 20th in Happy Hour, and made the final round of qualifying, starting 11th with a speed of 180.763mph (49.789 seconds).

Qualifying 32nd and last in the field was the #33 TheChallengesBook.com Chevrolet of owner-driver Josh Reaume, who along with teammate Jason White in the #34 Powder Ventures Excavations Chevrolet put up the two slowest times in qualifying. While Reaume secured his starting spot on Owner Points, White was sent home along with eight other drivers, including Travis Kvapil, whose Beaver Motorsports #1 Chevrolet was withdrawn on Wednesday.

Joining Reaume at the back of the field were 4th-place starter Harrison Burton, whose Kyle Busch Motorsports team changed engines on his #18 Safelite Toyota, and 20th-place Robby Lyons, slated to start 20th in Chad Finley’s #42 Sunwest Construction / Auto Value Chevrolet before an unapproved adjustments penalty.

When the race started, the back of the field stacked up in three-wide formation. Shaken from the formation was ARCA veteran Bobby Gerhart, who after a 13th-place showing in last week’s ARCA 200 was once again driving the #63 Lucas Oil Chevrolet. The #63 had typically been fielded by longtime team owner Mike Mittler, but due to an ongoing illness, fellow team owner D.J. Copp had taken a greater role in team operations, ultimately becoming the listed owner for Daytona. Gerhart held 32nd at the end of Lap 1 when trouble broke out in front of him.

Leading a trailing pack of trucks was the #28 Chevrolet of Bryan Dauzat, who was back along with FDNY Racing one full year after Jim Rosenblum had reportedly planned to close his team. According to a later report by Bob Pockrass, Dauzat saw a piece of debris come from under Joe Nemechek’s #87 D.A.B. Constructors Chevrolet (whether or not it was from the #87 was unclear). Dauzat ran it over and cut his right-front tire, sending him straight into the outside wall. Caught in Dauzat’s path was Robby Lyons, who was running the high line as he attempted to overcome his prerace penalty. Lyons continued on with the right side damaged, while last-place Gerhart narrowly avoided hitting the slowing Dauzat in the high lane.

At that very moment, further up the rankings, both DGR-Crosley trucks suddenly slowed with flat left-front tires. Decker’s truck slowed first, and pulled to the apron as the left-front fender started to come apart. Gilliland, meanwhile, was heading the inside line closer to the front when he slowed on the banking, causing the following trucks to check-up. Gilliland managed to slow off the banking and get safely to pit road without much damage. Decker, however, saw the left-front fender continue to disintegrate. By the time she reached pit entrance, a fire started under the hood, forcing the driver to climb out in a rush. Decker climbed out uninjured as fire crews fumbled with the extinguisher. Several feet away, Dauzat’s night went from bad to worse when he ran over Billy Rock, his jack man. After a few tense moments, Rock was reported awake and alert as he was transported to a local hospital.

Dauzat was classified 31st when he pulled behind the wall after the pit road incident. Lyons made it past the ensuing restart before ultimately falling out to finish 30th. The next of the night’s many accidents quickly filled the Bottom Five. Tyler Dippel’s #02 Danda Concrete / Lobas Productions Chevrolet broke loose, ultimately collecting both Ray Ciccarelli’s #49 CMI Installations Chevrolet and the #47 Glenden Enterprises Toyota. All three were eliminated with Ciccarelli rounding out the group in 28th.

Several multi-truck accidents marred the night’s action, but did ultimately give several drivers some valuable TV time. Among them were Cory Roper, who made his first-ever plate start, and worked his #04 Preferred Industrial Contractors Ford up to the 3rd spot, where he was running when he lost control in Turn 4 and slammed head-on into the inside wall. Joe Nemechek, who took over for his son John Hunter in the #87, ran as high as fifth before another wreck spun him into the grass, tearing off the splitter. Gus Dean, another standout from ARCA, ran near the front late in the going despite heavy damage to his right-front fender, only to see his #12 LG Air Conditioning Technologies Chevrolet be collected in still another pileup. Curiously, it was Austin Hill, a former driver of Dean’s team Young’s Motorsports, who would go on to win driving for defending series champion owner Shigeaki Hattori.

Only eight other trucks were still running at the finish. Among the survivors were Ross Chastain (3rd for Al Niece’s #45), Spencer Boyd (4th for Young in the #20), Josh Reaume (6th for his own team), Timothy Peters (7th for Niece in the #44), and Angela Ruch (8th in the NEMCO #8) who all earned sterling runs. Among them, it was Boyd’s first top-five finish in the series, Reaume’s first top-ten (after starting last), and Ruch’s first top-ten in only her second series start, her first in nine years.

LASTCAR STATISTICS
*This marked the first last-place finish for truck #54 since last fall at Texas, when Bo LeMastus wrecked 2 laps into the JAG Metals 350. The number had never trailed a Truck Series race at Daytona. 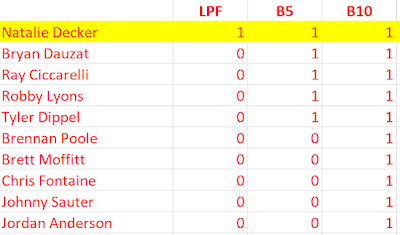