Joe Nemechek picked up the 6th last-place finish of his NASCAR Gander Outdoors Truck Series career in Saturday’s Ultimate Tailgating 200 at the Atlanta Motor Speedway when his #8 D.A.B. Constructors / TMS Titanium Chevrolet was involved in a crash after 50 of 130 laps.

Last week, NEMCO Motorsports enjoyed a strong start to the 2019. Nemechek himself took the controls of the #87, ran in the Top Five for most of the night, and even after he lost his splitter in a late-race accident, managed a respectable 16th-place finish. Meanwhile, Nemechek’s flagship #8, driven last season by son John Hunter and last week by part-timer Angela Ruch, steered Ruch to a career-best 8th.

With Atlanta came the start of the regular season, and the realities of running an underfunded team reared their ugly head once more. The #87 stayed in the shop this time around, and the #8 arrived at the 1.5-mile oval without primary sponsorship. Nemechek himself would drive, and in so doing hoped to keep the momentum of last week going. The veteran would have to do so with limited track time. After ranking 17th of 33 entrants during the first practice, qualifying was rained out, securing him 8th on the grid.

Sent home after the session was scrubbed was B.J. McLeod, who looked to run triple-duty at the Atlanta track. McLeod’s ride for the 130-lap race was to be fielded by Jacob Wallace Racing, a part-time Truck Series team that has made the field for five Eldora races and only three on pavement, none since 2014. With just the one Eldora start last season, the #80 Ford was sent home by the rain, joining Beaver Motorsports’ #1 for Travis Kvapil, withdrawn for the second-straight week.

Starting last was another name synonymous with Eldora – Norm Benning. Carrying returning sponsorship from Zomongo and H&H Transport, Bennning’s #6 Chevrolet was second-slowest ahead of Jason White in Daytona qualifying, but his 20 attempts in 23 races last year earned him the 32nd and final starting spot. It was to be not only Benning’s first Truck Series start since last summer at Mosport, but only his third series start at Atlanta since 2015.

After the first lap, the last spot belonged to Timmy Hill, swapped into D.J. Copp’s #63 Chevrolet at the last minute in place of Daytona’s driver Bobby Gerhart. Hill then climbed to 30th, dropping Benning to last on Lap 3. By that point, Benning had dropped to more than 11 seconds back of the lead. By Lap 9, the last spot had fallen to Ray Ciccarelli, who was looking to shake off the disappointment of a mid-race accident in his debut as the new team owner of the #49 CMI Installations Chevrolet.

On Lap 16, trouble once again found Daytona last-placer Natalie Decker, who lost control off Turn 4 and spun into the grass. Decker recovered, but not until after she lost a lap to the slowing field. Decker, who restarted two laps down and ultimately finished 24th, three down, secured her second bottom-ten finish of the young season, and now leads Nemechek by that margin in the 2019 LASTCAR Truck Series Championship.

Nemechek secured the last spot when he pulled in for an unscheduled stop just 11 laps into Stage 2. His #8 showed significant damage to the lower end of the nose in the area of the splitter, the left-front of the splitter gone and the right-front fender bent. The driver had apparently clipped the edge of the grass near the start / finish line, drawing the caution flag. Nemechek’s truck was pushed behind the wall with smoke pouring from beneath the hood.

Hill finished 31st, followed by Josh Reaume who fell out after 78 laps to finish 30th, ending his race in an unsponsored #33. Benning’s day ended with steering woes after 82 laps turned, leaving him 29th. Rounding out the group was Chad Finley, back in his #42 Auto Value Certified Service Centers / Air Lift Chevrolet for the first time this year, but out after the day’s biggest multi-truck pileup on Lap 118.

LASTCAR STATISTICS
*This marked the first last-place finish for #8 in the Truck Series since October 22, 2016, when John Hunter Nemechek’s engine failure left him last in Talladega. The number had never before trailed a Truck race at Atlanta.
*This was Joe Nemechek’s first last-place finish in truck #8, and the first time he’d finished last after qualifying better than 23rd.
*Nemechek’s 50 laps complete are the third-most by a Truck Series last-place finisher at Atlanta, trailing only Joey Miller’s 58 on March 17, 2006 and current record holder William Byron, who turned 59 laps on February 27, 2016. 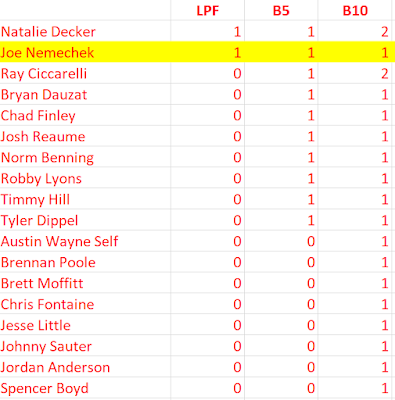