ARCA: Daytona draft gets the best of Willie Mullins 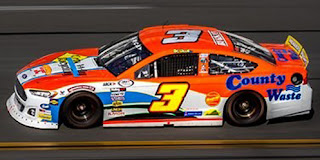 Willie Mullins finished last for the 2nd time in his ARCA Menards Series career in Saturday’s Lucas Oil 200 Driven by General Tire at the Daytona International Speedway. The finish came in Mullins’ 14th series start and came two years after his previous last-place finish, which came in the 2017 edition of the Lucas Oil 200.

A native of Virginia, Willie Mullins is a quintessential throwback racer. During the week, he works as a fleet manager for waste trucks in Fredericksburg. In his off time, he races at Dominion Raceway, and puts together his own small ARCA crew. Another adjective often thrown around with these kind of teams is “independent”, but that’s not the case with the Mullins Racing crew. After running ARCA races at New Jersey Motorsports Park in 2008, 2009, 2011 and 2012, Mullins Racing formed an alliance with Darrell Basham Racing to use the #34’s owner points in select events - mostly on superspeedways. The first race of the pairing yielded an eighth at Daytona in 2016. Although no other top tens were recorded, the partnership ran two years and seven races. For 2018, Mullins made a different agreement to use Hixson Motorsport’s owner points after that team scaled back operations.

The all-volunteer operation also expanded to a two-car effort, with Andrew Belmont joining the team for Daytona. The first race at Daytona was a resounding success: Mullins finished second and was able to hold off two Venturini Motorsports cars on the final lap. Belmont finished ninth after avoiding the ubiquitous attrition at the end. At Elko, Mullins Racing also brought two cars, putting Virginia development driver Robert Bruce in the second entry. The team scaled back to one car this year at Daytona, and also plans to race Nashville and maybe Talladega. They also brought on Tony Furr as crew chief straight from Cup Series team StarCom Racing.

The 2018-2019 offseason brought both exciting and disappointing news for ARCA. On one hand, MDM Motorsports went from fielding three full-time entries and two part-time entries to not fielding any cars at all. Other teams that consisted a significant portion of the schedule like Patriot Motorsports Group and Darrell Basham Racing have not announced any plans, and full-season teams such as Fast Track Racing, Brad Smith Motorsports and Wayne Peterson Racing have only released partial plans.

But for every down announcement, there was an up announcement. Menards stepped up to be the entitlement sponsor for ARCA, the first one for the series since RE/MAX. A renewed interest in the series was represented by more involvement from large NASCAR teams – GMS Racing announced a partial slate, Richard Petty Motorsports affiliate Empire Racing announced an expanded schedule for Thad Moffitt, and Truck teams On Point Motorsports and Vizion Motorsports (formerly NextGen Motorsports) entered the series. The championship fight looks to be a deep one this year as well, with as many as seven bona fide championship contenders.

Daytona traditionally attracts the highest car count of the year for ARCA. Despite all of the good announcements; the car count slipped three from last year, from 39 to 35. Tommy Praytor’s team, which fielded two cars at Daytona last year (including last-placer Ronnie Osmer), was originally planning to return but never filed an entry after it was revealed that the Praytor family was awaiting the birth of another child. Whelen Modified and Daytona / Talladega mainstay Bryan Dauzat also did not enter. Neither did MBM Motorsports nor Norm Hutton Racing.

On the flip side, a number of teams and drivers made series debuts: Brenden Queen and Paul Williamson with Vizion Motorsports, Connor Hall with Chad Bryant Racing, and Jason White with Fast Track Racing. A number of drivers also moved teams: C.J. McLaughlin kicked off a partial schedule as a teammate to Andy Seuss in a second Our Motorsports entry, Tyler Dippel ran a one-off in the Ken Schrader Racing #52, and Scott Melton formalized his partnership with Kimmel Racing.

Although practice at plate tracks means near nothing, names familiar to LASTCAR readers from last season made early appearances at the bottom of the leaderboard. Brad Smith trailed first practice, his #48 Brad Smith Motorsports team running the familiar red scheme that has become synonymous with the late James Hylton. Tommy Vigh, Jr. was last in second practice; his Daytona debut up to that point not going much better than his tumultuous series debut at Madison last year. Smith and Wayne Peterson Racing driver Con Nicolopoulos qualified on provisional, with Smith slated to take the green in 35th.

The last-place battle initially looked to be over before it started. John Ferrier, driving a third Empire Racing car, stalled on the backstretch during the pace laps. His car was brought on to pit road and stayed there until about Lap 20. He eventually completed 35 circuits before retiring with clutch issues. On Lap 4, however, the lead pack was racing single-file down the backstretch when Michael Self took a peek to the outside. Mullins closed the gap just a bit, and Self came down to just clip the right-front of the #3 machine. That resulted in both cars sliding through the grass, and due to the current state of aerodynamics and downforce in stock car racing, the front ends of both cars were torn up. The Mullins team deemed the damage terminal, pulling into the garage after three laps. Self, running a fully-funded team that is going for the team, also pulled into the garage but eventually went back out to try and gain points, ending up 31st.

33rd went to Eric Caudell, whose new composite body car went firewall-deep into the SAFER barrier at pit entrance halfway through the race, turned by the 69 of Scott Melton as Caudell was trying to pit. Unlike previous efforts, Caudell’s composite body appeared to have no association with Hixson Motorsports; Hixson’s social accounts made no mention of Caudell and the FS1 commentators mentioned how Caudell and not the Hixson team brought the car across the country to Daytona. Ironically, Melton was the next car to retire, completing 45 laps before falling out with brake issues. The rest of the Bottom Ten was filled with accident victims: Brenden Queen, Paul Williamson and J.J. Pack after separate incidents avoiding a spinning Connor Hall, Thad Moffitt after a tire went down, and Gus Dean, collected in the first big pileup in the late stages of the race. 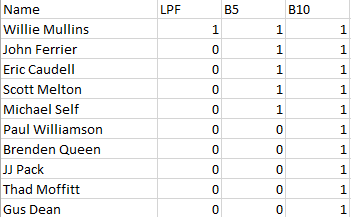