XFINITY: Jeff Green last early at ISM Raceway, but will return in 2019

Jeff Green picked up the 114th last-place finish of his NASCAR XFINITY Series career in Saturday’s Whelen Trusted to Perform 200 at the ISM Raceway when his #93 RSS Racing Chevrolet fell out with brake issues after he completed 18 of 200 laps.

The finish, which came in Green’s 512th series start, was his series-leading twelfth of 2018 and his first since Indianapolis, seven races ago, the same race where he clinched the 2018 LASTCAR XFINITY Series title. In the XFINITY Series last-place rankings, it was the 41st for car #93, the 56th from brake trouble, and the 518th for Chevrolet. Across NASCAR’s top three series, it was the 91st for the #93, the 159th from brake issues, and the 1,637th for Chevrolet.

Green, who has run no better than 34th since his most recent LASTCAR feature, rejoined teammates Ryan Sieg and J.J. Yeley for the weekend at the ISM Raceway. When interviewed on Friday morning, Green indicated that he will be back driving the #93 Chevrolet for RSS Racing in 2019. He will continue to run as a “start-and-park” with the exception of the restrictor-plate races unless a sponsor can be found. Green indicated that he runs the same equipment as his teammates and can run full races for less than other teams. Green’s goal is to run between ten and twelve full races if a sponsor is found. A crowdfunded effort was also suggested to meet that goal.

In practice, Green once again impressed in his #93. Despite running just three laps in the first session, he ranked 17th-fastest overall, outpacing both his teammates. After skipping Happy Hour, he came just short – just under nine-hundredths of 24th-place Joey Gase – of making Round 2 in qualifying. Instead, he settled for the 25th starting spot with a lap of 127.537mph (28.227 seconds).

The back of the garage area was a busy place Friday morning. At the far end of the XFINITY garage, no fewer than seven lower-funded cars were sitting out in the open, many with their crews applying decals. Mike Harmon’s crew applied logos for Veterans 4 Child Rescue on the quarter-panels. To Harmon’s left at the JP Motorsports hauler, Bayley Currey’s car still had the yellow #45 numbers on his Toyota, and the team had to hurry cover those numerals each with a white #55. The same white font was on Josh Bilicki’s #45, which on Friday morning was still a flat black backup car. Bilicki himself was helping the crew apply the several decals by hand, and the crew threw together a setup virtually from scratch.

Ultimately, Bilicki couldn’t make it out onto the track for qualifying, and secured the 40th and final starting spot. Just ahead of him were two drivers who didn’t make it out in Round 1 because their cars failed inspection three times: Playoff contender (and eventual race winner) Christopher Bell in the #20 GameStop Just Cause 4 Toyota and Ty Majeski in the #60 Ford. Redundant tail-end penalties for all three kept the final three positions in the same order for the start.

The green flag that flew on Saturday was Akinori Ogata’s first in the XFINITY Series. The Japanese driver was brought on to drive Carl Long’s #66 SEAVAC – USA, LLC Toyota, a car that bore a striking resemblance to PRISM Motorsports’ Cup cars in 2009 and 2010. Ogata, whose name on the windscreen appeared cut from rectangular decals one character at a time, had seven previous Truck starts, including a pair at Phoenix. But the transition from trucks to cars wasn’t a smooth one. Heading into Turn 1, Ogata found his car to be too loose, and he spun backwards into the outside wall.

Under the first caution of the day, Ogata pulled into his pit stall, where the crew made quick work on the left-rear corner of the machine that was bent out of place. Also making a trip to pit road was 24th-place starter David Starr, who was black-flagged for jumping the start on the ISM Raceway’s new reversed configuration. Starr’s #52 Whataburger Chevrolet served its penalty on Lap 4, and Ogata rejoined the action laps down with several strips of black tape holding the wounded left-corner of the car together. Ogata cleared the Crash Clock, averting a last-place finish. He’d eventually climb to 33rd, utterly exhausted from the handling of his wounded machine.

On the ensuing restart and 42-lap green-flag run, the first three spots in the Bottom Five filled up. Jeff Green pulled the #93 behind the wall first, his car parked directly alongside the XFINITY Series garage building. Next came Morgan Shepherd, who after his Texas wreck was further helped by JD Motorsports, who prepared his #89 Visone RV Chevrolet in their shop. Shepherd faced one more hurdle in Phoenix when his hauler broke down within a half-hour’s drive of the track. The truck made it to the track, and Shepherd qualified and started the race, only to pull off the track and park his machine behind the hauler after 22 laps.

Finishing 38th was Stephen Leicht, who by Lap 89 had his #99 Chevrolet parked in the final pit stall in the XFINITY garage. A single crewman from SS-Green Light Racing was working on the machine, which was soon after put on jack stands. The team later put on the chrome rims used as shop wheels for this third entry from B.J. McLeod Motorsports.

The 37th spot fell to Chad Finchum, who after struggling with the handling on his #40 Smithbilt Homes Toyota spun the right-rear wheel on a late restart and started leaking axle grease, forcing him behind the wall on Lap 151.

Rounding out the group was Vinnie Miller, whose run in B.J. McLeod’s #78 CorvetteParts.net / JW Transport Chevrolet was hampered by a persistent ignition problem. Miller pulled in on Laps 113 and 165 before he was done for the day in the final laps, joined shortly after by Tommy Joe Martins with a blown engine on the final McLeod car still running. Martins ended up just outside the Bottom Five in 35th.

With one race to go, Green is now one finish away from matching the exact number of last-place runs he earned in 2017.

LASTCAR STATISTICS
*This marks the second time in his career that Green has swept both last-place finishes at Phoenix. The other time occurred in 2015. 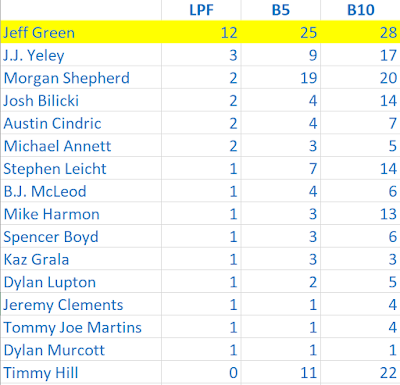 So he'll be a start and park joke again next year. I can't see why you argue against shorter fields when crap like this is allowed to happen.