Morgan Shepherd picked up the 19th last-place finish of his NASCAR XFINITY Series career in Saturday’s O’Reilly Auto Parts 300 at the Texas Motor Speedway when his #89 Visone RV Chevrolet fell out with electrical problems after 4 of 200 laps.

Shepherd, who turned 77 last month, faces new challenges as he closes out his 35th season in the XFINITY Series. In an interview with Dustin Albino, the veteran expressed concern over 2019. As of the October 24 article, Shepherd did not have a composite body car ready for Daytona, and needs to raise between $50,000 and $75,000 to make a run at it. This on top of NASCAR’s inexplicable second field reduction in seven years, this time from 40 to 38. The reduction seems specifically geared toward excluding owner-drivers like Shepherd, although coming into Texas, the veteran had only started 39th or 40th in four of his previous 18 starts in 2018. But it was in Texas that Shepherd faced yet another hurdle.

Shepherd was among the 40 drivers entered for as many spots in Saturday’s race, and unfortunately, was one of several to find trouble. In opening practice, after turning a single lap of just 123.108mph (43.864 seconds), Shepherd ran too high in Turns 1 and 2 and scrubbed the outside wall. The car lost control at corner exit, sending it sliding into the inside wall. The car spun nearly 180 degrees before it struck the barrier with the right-front, lifting the entire car off the ground. While Shepherd was checked and released from the infield care center, his car was totaled.

As one of a handful of small XFINITY Series teams with just one car at the track, Shepherd faced the very real possibility of withdrawing from the race. That is, until JD Motorsports stepped in. The team, which already had four drivers entered in the race, offered Shepherd a backup car that was prepared for ARCA driver Quin Houff, who raced the team’s #15 Chevrolet. By late Friday, photos by Shepherd crewman Brian Wertman showed this red machine carried Shepherd’s gold rims, the #89 on the rear TV panel, but Houff’s name on the roof rails. By race day, the car carried white numbers on the doors, red tape covered Houff’s name with Shepherd’s signature, and the car ran black rims, likely from the JD team. It would mark the first time team owner Johnny Davis had five cars entered in a single XFINITY Series race.

Other drivers weren’t so lucky. The unforgiving barriers also caught Josh Bilicki, whose #45 Prevagen Toyota broke something in Turns 3 and 4 and struck the outside wall at over 170mph. While Bilicki was unhurt, the JP Motorsports team also didn’t have a backup car for either him nor Bayley Currey in the #55. While the driver tweeted that he was looking to work out a deal similar to Shepherd’s, it never came to pass. The JP team elected to swap driver numbers on Currey’s #55 to the #45, which was higher in Owner Points. Thus, both Bilicki and the #55 team withdrew, though driver and car weren’t entered together.

The result of all this was the first 39-car XFINITY Series field since August 16, 2014, when 39 cars took the green at Mid-Ohio. Shepherd took the final spot as both he and Ty Majeski in the #60 Ford didn’t turn laps in Round 1 (Shepherd trailing the #60 in Owner Points). Majeski was still another driver to strike the wall, his incident occurring during qualifying. Both Majeski and Ross Chastain (qualified 23rd in the #4 JD Motorsports Chevrolet) incurred unapproved adjustments penalties. Shepherd’s backup car was one of five, soon to be joined at the rear by Austin Cindric (8th-place starter in the #22 Discount Tire Ford), Joey Gase (30th in the #35 Sparks Energy Inc. Chevrolet), David Starr (32nd in the #52 Whataburger Chevrolet), and Bayley Currey, whose number swap from Josh Bilicki’s #45 counted as a backup car even though he remained in the same vehicle.

As the ragged field of repaired machines and backup cars accelerated past the starting line, trouble this time broke out up front. For the second-straight XFINITY race, the leaders tangled, threatening another Lap 1 pileup. Battling Shane Lee’s #3 Childress Vineyards Chevrolet for the lead, polesitter Christopher Bell in the #20 GameStop / NBA 2K19 Toyota lost control and spun up the track. Unlike Kansas, the rest of the field managed to avoid serious damage with only Spencer Gallagher and John Hunter Nemechek losing control but avoiding any contact.

Under the ensuing caution, Nemechek’s #42 Romco Equipment Chevrolet took last from Shepherd. At the end of Lap 2, Austin Cindric took the spot as he pitted his backup #22 Discount Tire Ford, then dropped Ryan Reed to 39th by passing his #16 Drive Down A1C / Lilly Diabetes Ford on pit road. Cindric retook last the next time by with a second stop, at which point Shepherd had climbed his way to 34th. Shepherd then retook last on Lap 5 when he pulled behind the wall. At that same moment, Bobby Earnhardt spun Carl Long’s #66 Copeland Insurance Agency / HABCO Toyota off Turn 4, but didn’t draw the yellow at first. Earnhardt made it to pit road and dropped to 38th, one lap in front of Shepherd. While Shepherd didn’t return to action, Earnhardt did on Lap 10, ultimately climbing out of the Bottom Five before a wreck left him 34th.

As at Kansas, the underdogs of the XFINITY Series lurked just outside the Top 10, led by Las Vegas winner Ross Chastain, recovered from his pre-race penalty to finish 11th in the top-finishing JD Motorsports entry. Ryan Sieg overcame a spin to come home 12th, two spots ahead of last year’s Road America winner Jeremy Clements and three in front of Green’s teammate J.J. Yeley. Chad Finchum enjoyed a 17th to follow his strong 16th in Kansas with Brandon Brown, Ray Black Jr., and Garrett Smithley rounding out the Top 20. Just missing out was Bayley Currey, who finished a career-best 21st in the renumbered #45 Rollin Smoke BBQ / Touched By Pros Toyota.

As of this writing, Shepherd is planning on returning to action this weekend at the ISM Raceway. Wertman tweeted on Monday that JD Motorsports has again come to the rescue with the black-and-gold #89 being worked on in the Davis shop. Perhaps such help can go a long way toward keeping Shepherd on the track both this season and beyond.

LASTCAR STATISTICS
*This marked the first last-place finish for both Shepherd and car #89 in an XFINITY Series race at Texas. 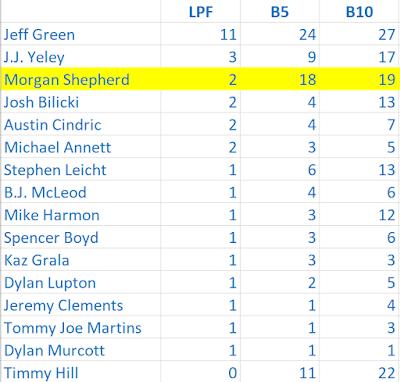