Vinnie Miller picked up the 1st last-place finish of his NASCAR XFINITY Series career in Saturday’s Ford EcoBoost 300 at the Homestead-Miami Speedway when his #78 JAS Expedited Trucking Chevrolet fell out with clutch problems after 10 of 200 laps.

The 2018 season marked Miller’s first full season in NASCAR XFINITY Series competition. Miller began racing quarter midgets in his native Michigan when he was five, competed in Pure Stocks when he was thirteen, and was crowned 2012’s Rookie of the Year in the Sportsman division. He then jumped to Super Late Model competition in 2014, and in 2016 took his first checkered flat at the Franklin County Speedway. His next move was to stock cars, making a combined thirteen starts in 2017 between the K&N Pro Series East and ARCA Racing Series. His best finish between the two was at South Boston in K&N, where he followed Harrison Burton and Todd Gilliland to a 3rd-place finish. He also made it to NASCAR that year, finishing 29th in his XFINITY Series debut at Chicagoland, then 7th for Jeff Bolen in the Truck Series round at Talladega.

Miller began this season with Johnny Davis, whose JD Motorsports team gave him his first XFINITY start. He took over the team’s #01 Chevrolet which, for much of last year, was driven by Harrison Rhodes. Miller again ran well at Talladega, finishing 17th in his first XFINITY race there, and matched that run with another 17th at Indianapolis. But with just four runs of 20th or better and seven DNFs, Miller and JD parted ways after Richmond in September. From the Roval onward, Miller has driven for B.J. McLeod in the #78 Chevrolet. His best run in that span was a 22nd at Kansas.

At Homestead, Miller was one of 45 drivers entered for 40 spots, meaning that five drivers would miss the show. He began the weekend 38th on the speed charts for the opening practice, didn’t turn a lap in Happy Hour, and relied on Owner Points to secure the 36th spot on the grid following his lap of 153.956mph (35.075 seconds). Stephen Leicht, one of Miller’s teammates at the McLeod team in the #99 Chevrolet, was second-fastest of those who missed the cut.

Fastest of the four drivers who joined Leicht on the early ride home was Josh Williams, driving DGM Racing’s second car, the #92 Sleep Well / StarTron Chevrolet. Both JP Motorsports cars also missed the race – Josh Bilicki in the #45 Prevagen Toyota and Bayley Currey in the #55 Rollin Smoke Barbecue / Touched by Pros Toyota. Tim Viens was denied his first XFINITY start since 2015 when he couldn’t get Mike Harmon’s #74 811fitness.com Chevrolet up to speed.

Morgan Shepherd missed the race, too, but his car didn’t. After JD Motorsports again prepared Shepherd’s #89 Visone RV Chevrolet, the veteran put Cup regular Landon Cassill behind the wheel. Cassill impressed in Round 1, securing the 24th best starting spot, then settling on the spot in Round 2. It was the best qualifying run for Shepherd’s #89 since April 30, 2016, when he qualified 23rd at Talladega.

Prior to the start of Saturday’s race, just one driver fell to the rear – Carl Long. Long swapped himself into the team’s “Zombie Dodge,” the last Dodge Challenger still running on the XFINITY Series circuit. Due to NASCAR’s current regulations with composite bodies, the Dodge would no longer be an eligible model for the XFINITY Series in 2019, making Homestead its final start. To make sure the car made this final race, he and Chad Finchum swapped car numbers, putting the #40 on the Dodge in place of last week’s #13. Long relied on those Owner Points to start 38th. His car carried a “thank you” message to Dodge on the hood and a “For Sale” sign on the sides. Unapproved adjustments dropped him to 40th for the start.

Long started the race with an unscheduled pit stop for a flat tire on Lap 3, then was called in to serve a pass-through penalty on Lap 10 for speeding down pit road. He returned to competition in the 40th spot, a full seven laps down to the leaders. At the same time, Miller was beginning to have clutch problems on the #78. He was seen on camera returning to the track on Lap 12 from his own unscheduled pit stop, at which point he was four laps behind. Soon, after he returned to pit road, then was pushed behind the wall. Miller took last from Long on Lap 16, but wouldn’t officially claim it until much later. On Lap 36, the McLeod crew was still talking about going back out.

By then, Miller was just four laps behind 39th-place Jeff Green, the seven-time LASTCAR XFINITY Series Champion, in just the second start of the year for RSS Racing’s #37 Chevrolet. All three RSS Racing drivers had swapped rides to allow for a returning Angela Ruch, who drove the flagship #39. Green got the #37 into the show with the Past Champion’s Provisional, securing the last spot on the grid. Ruch was flagged twice for not meeting minimum speed, but managed to just climb past Green before she was parked. Green, Ruch, and J.J. Yeley’s RSS cars would take up three of the Bottom Five positions. The 38th spot would go to Landon Cassill, who was still running 27th in Shepherd’s #89 on Lap 15 before he pulled into the garage.

Miller remained in 40th – officially classified “off” the track rather than “out” – for more than half of the race. The McLeod crew had worked just as hard the previous week at the ISM Raceway, attending to an ignition issue on Lap 113. Seven laps later, Miller re-fired the engine in the closing laps, burning out of his pit stall on Lap 123 and returning to the track to finish 36th. But at Homestead, there would be no return. On Lap 111, the crew said the car’s “all torn apart” and likely wouldn’t make it back out on the track. It was an unfortunate turn of events, as five retired drivers were within 50 laps of the #78. On Lap 120, the #78 crew confirmed they were out of the race.

Carl Long made it to the finish in the “Zombie Dodge,” overcoming a minimum speed penalty on Lap 16 to finish 33rd. Long posted on Facebook that, after several offers from collectors and vintage racers, he plans to restore the Dodge and sell it at auction. Long’s team, Motorsports Business Management, looks to compete in both Cup and XFINITY next year with an increased commitment to running Toyotas.

The NASCAR XFINITY Series Championship went to Tyler Reddick, who doesn’t have a single last-place finish in 114 combined XFINITY and Truck Series starts.

For more on Vinnie Miller, check out his website here.

LASTCAR STATISTICS
*This marked the first last-place finish for car #78 in an XFINITY Series race since this past August 4 at Watkins Glen, when Tommy Joe Martins was eliminated in a single-car crash after 3 laps of the Zippo 200. The number had never before trailed an XFINITY Series race at Homestead.
*Miller is the first first-time last-placer in the XFINITY Homestead finale since November 17, 2012, when Dexter Stacey had engine issues on the opening lap. Curiously, Stacey was the final driver to finish 43rd before the fields were reduced to 40 starters. Miller was the last to run 40th due to next year's second reduction to 38.
*This race marked the first time since May 5, 2012 that an XFINITY Series last-place finisher fell out due to clutch trouble. That day saw Kevin Lepage, then driving for Jimmy Means Racing, fall out after just one lap at Talladega. 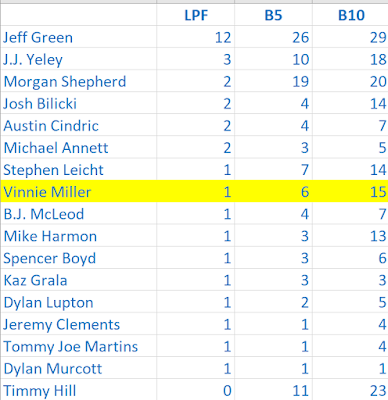