Camden Murphy picked up the 2nd last-place finish of his NASCAR Camping World Truck Series career in Friday’s Ford EcoBoost 200 at the Homestead-Miami Speedway when his #50 SobrietyNation Chevrolet fell out with a vibration after 11 of 134 laps.

Neither Murphy nor the Beaver Motorsports #50 team were slated to race in Friday’s season finale. Mark Beaver’s #50 Chevrolet last ran at Mosport in August and was then entered at Vegas, where they withdrew. In the time since, Beaver joined Mike Harmon in helping field the #15 Chevrolet, one of two trucks Premium Motorsports fielded alongside the #49. Like Beaver, Harmon had also scaled-back his Truck Series effort since his #74 last took the green at Mosport and then withdrew in Vegas. Around this time came news that Premium will close their four-year-old Truck Series effort at the end of 2018, leaving open a possibility that Beaver or Harmon could acquire the team’s assets for next season.

The cooperation between Beaver, Harmon, and Premium Motorsports appeared to take its next step last Wednesday, when the Beaver Motorsports #50 was entered with Mike Harmon driving. This grew the field from 31 entries to a full 32, averting the first short field in the series since Talladega last year (a 33rd entry, Niece Motorsports’ #38, would be added later with Ross Chastain as driver). This truck was essentially a third truck from Premium Motorsports’ shop, carrying the same white paint scheme, SobrietyNation sponsorship, and Premium team logo on the nose as the #49 Chevrolet. The only difference was Beaver’s #50 on the doors and roof.

As the teams arrived in Homestead, Camden Murphy was there, but not as a driver. Since his most recent Truck Series start at Pocono, Murphy had been entered at Bristol, Las Vegas, and Texas as driver of Jennifer Jo Cobb’s second Chevrolet, the #0, but was withdrawn each time. He’d since become the car chief for D.J. Copp’s #83 Chevrolet, which a week earlier at the ISM Raceway saw Dawson Cram finish a career-best 16th. Cram’s previous best was a 17th at Martinsville in the spring, when he too drove for Beaver Motorsports.

Last Wednesday, Copp intrigued many on Twitter when he posted a picture of Jeremy Mayfield standing next to the #83 in shop. Reports later came in that Mayfield’s status with NASCAR had not changed since his 2009 suspension since he had not completed the sport’s “Road to Recovery” program. Instead, Todd Peck would drive Copp’s truck at Homestead with Pulse Transport as sponsor. The result was disastrous – Peck wrecked on his warm-up lap in opening practice, forcing Copp’s team to withdraw. Thus, the remaining 32 entries would be guaranteed starting spots in the race.

Mike Harmon also didn’t complete a lap in opening practice, and Murphy was called in to help shake down the #50 truck for Beaver. Murphy took 30th in the second practice session, outpacing Reid Wilson in the Premium #15, and secured the 32nd and final spot in qualifying with a lap of 154.577mph (34.934 seconds). “They knew it needed some work,” said Murphy after Friday’s race. “She was definitely a hand full that’s for sure! Needless to say we had almost 2 inches of toe in. That was just one of our struggles we were overcoming.”

On Friday night, no drivers were sent to the back for pre-race penalties. Murphy remained at the back of the field, 4.591 seconds back at the green, then 7.262 back after Lap 1. Slipping to the rear was Joe Nemechek, who secured the 2018 LASTCAR Truck Series title last week in Phoenix, his #87 Fleetwing / D.A.B. Constructors Chevrolet dropping back from 20th on the grid to 30th on the track.

On Lap 6, Murphy caught and passed Wilson’s #15 to take the 31st spot, and put 1.316 seconds on Wilson by the end of the seventh circuit. But Murphy’s truck was overheating, and he pulled onto pit road, then behind the wall with the truck spraying water. The team thanked Murphy for his help over the radio, mentioning that he was reeling in other drivers after he passed Wilson.

Nemechek pulled off the track nine laps later, securing the 31st spot. Wilson lost the engine after 80 circuits, leaving him 30th. The only other DNF of the night was Tanner Thorson, who lost the engine on Young’s Motorsports’ #20 Go Share Chevrolet after 120 circuits. Rounding out the group was Jennifer Jo Cobb, who finished six laps down to the leader in her #10 Driven2Honor.org Chevrolet.

“Personally I have just been trying to find ways to get into the seat and start and parks have been the way lately,” said Murphy. “I’ve been fortunate enough to make the most of each of the opportunities and have created better ones, but unfortunately I do not have the sponsors and unlike most of the industry today, my family cannot support me financially. I have been on my own driving from track to track. Working [in] the shops, working on my stuff at the track, just to get opportunities to prove myself behind the wheel. Because I believe in myself and know what I can achieve behind the wheel.”

The race win and the championship went to underfunded Hattori Racing Enterprises and driver Brett Moffitt. The 2015 Cup Series Rookie of the Year landed the ride for the 2018 season, and scored his first of six victories this year in the second round of the season at Atlanta. With a small crew and a few loyal sponsors from overseas, Moffitt wasn’t sure if he was going to run the full season. But he developed a penchant for thrilling last-minute victories, capped by a late charge in the final three laps at the ISM Raceway that locked him into the Championship Four. And now former IndyCar driver Shigeaki Hattori, who finished last in one of his ten Truck Series starts as a driver in 2005, has his first championship as an owner.

LASTCAR STATISTICS
*This marked the first last-place finish for truck #50 since June 8, 2018, when Todd Peck’s run for Beaver Motorsports ended after 1 lap at Texas.
*The #50 had trailed a Truck Series race at Homestead just once before – November 19, 2004, when Jon Wood’s #50 roushracing.com Ford tangled with Kelly Sutton on Lap 2 of the Ford 200. Wood actually made it to pit road while Sutton did not, but without the “Crash Clock” in place, Sutton returned to the race and completed 19 more laps, moving up two spots to 34th. 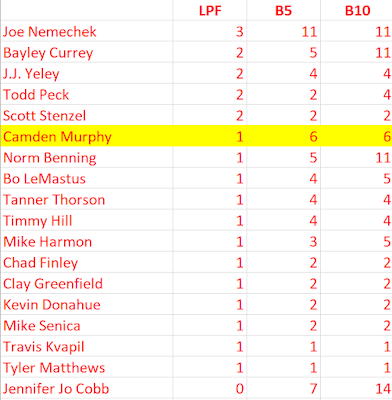