TRUCKS: Bo LeMastus wrecks out early on a forgettable night for DGR-Crosley team

Bo LeMastus picked up the 1st last-place finish of his NASCAR Camping World Truck Series career in Sunday’s JAG Metals 350 at the Texas Motor Speedway when his #54 Crosley Brands / DGR-Crosley Toyota was involved in a single-truck accident after he completed 2 of the night’s 147 laps.

At 55 years old, Bo LeMastus is not your typical newcomer to the NASCAR Camping World Truck Series. The CEO of Crosley Brands has been an owner-driver in the ARCA Racing Series since 2013, most often campaigning the #42 with his Crosley company as sponsor. His only full-time ARCA season came in 2015, where he finished a strong 5th in the championship, and his best series finish was a 6th at Daytona in 2016.

This year, LeMastus joined forces with NASCAR veteran David Gilliland to form DGR-Crosley, a two-truck operation for 2018. As part of the deal, both the full-time #54 Toyota and part-time #17 Toyota would carry sponsorship from Crosley Brands and LeMastus would run a partial schedule in both trucks. LeMastus began his year in the #54, where a mid-race crash left him 30th. He would also debut the #17 team at Charlotte, only to DNQ, then bounce back with a 26th-place run at Texas in the spring.

Coming into the fall return to Texas, nine other drivers (not counting LeMastus and Gilliland) had made at least one start for DGR-Crosley in 2018, many of them looking to follow the pair into national competition: Tyler Ankrum, Kyle Benjamin, Tyler Dippel, Chris Eggleston, Riley Herbst, Justin Marks, Matt Mills, Zane Smith, and Chris Windom. Benjamin have the team its best finish to date, a runner-up to John Hunter Nemechek in the spring race at Martinsville. But for Texas, it would again be the team owners driving the #54 and #17 with LeMastus in the former and Gilliland in the latter.

The preliminary entry list for Friday stood at 35 cars earlier in the week, but by Wednesday, Jennifer Jo Cobb withdrew her second truck, the #0 Chevrolet, which was to go to Monster Jam competitor Camden Murphy. Still, with 34 trucks entered for 32 spots, there promised to be a tight battle to avoid becoming one of the two sent home. In the end, those drivers were Reid Wilson, who took Korbin Forrister’s seat in All Out Motorsports’ #7 Tru North Chevrolet, and Josh Reaume, back behind the wheel of his own #33 Reaume Brothers Racing Chevrolet. Reaume was faster than all but two of the five drivers locked-in on Owner Points.

Taking the 32nd spot was fan favorite Jordan Anderson, who debuted a new black paint scheme for his #3 Bommarito Automotive Group Chevrolet. The chassis, designated No. 007, put up the slowest lap of the session with a speed of 158.117mph (34.152 seconds), but made it in on Owner Points. Anderson was one of four drivers who incurred pre-race tail-end penalties for unapproved adjustments following incidents in practice and qualifying, joined by Todd Gilliland (started 12th in the #4 JBL / SiriusXM Toyota), Ben Rhodes (16th in the #41 The Carolina Nut Co. Ford), and Bayley Currey (#83 United Automotive Chevrolet).

At the start of the race, the 32nd spot went to Timmy Hill, who after being denied a Cup start at Texas, turned in a career-best run in Truck Series qualifying. Hill had been swapped in for Joe Neemchek as driver of NEMCO Motorsports’ returning #87 Fleetwing Chevrolet, often a “start-and-park” paired with John Hunter Nemechek’s flagship #8. Hill put up the 10th-fastest time in Round 1 and settled for 11th in Round 2 after Todd Gilliland had an incident in qualifying. Unfortunately, the night proved short for Hill, who pulled behind the wall in the early laps. But it was LeMastus who prevented Hill’s weekend from ending with a last-place finish.

As Hill prepared to exit the race, nearly 8 seconds back of the lead on Lap 2, LeMastus was running around the 16th position when he lost control in Turns 1 and 2, then backed into the outside wall. As the caution flew, LeMastus let his car roll backwards down the banking and drove back to pit road with the rear clip crunched around the rear wheels. Unfortunately, his night was done.

Moments after securing their first last-place finish, DGR-Crosley’s night turned from bad to worse. David Gilliland wrecked the #17 shortly after the ensuing restart, leaving him a disappointing 30th. Ahead of Gilliland and 31st-place Hill came Anderson’s “007,” which overheated after only 30 laps, leaving him 29th, while fellow owner-driver Cory Roper rounded out the Bottom Five after his #04 Preferred Industrial Contractors Ford was collected in the night’s biggest pileup on Lap 40. For Gilliland, Anderson, and Roper, it was their first bottom-five finish of the season.

LASTCAR STATISTICS
*This marked the first-ever last-place finish for the #54 in Truck Series history. It came in the number’s 113th series start, dating back to the first-ever Truck Series points race at Phoenix in 1995, when Steve McEachern finished 28th. As of this writing, there are 14 other currently available truck numbers that have yet to finish last in the series.
*LeMastus’ finish prevents Chevrolet from sweeping every last-place finish for a second-straight Truck Series season. It’s the first time a Toyota (and a non-Chevrolet) finished last in a Truck Series race since the 2016 finale at Homestead, when Ryan Truex fell out after 49 laps with engine trouble. 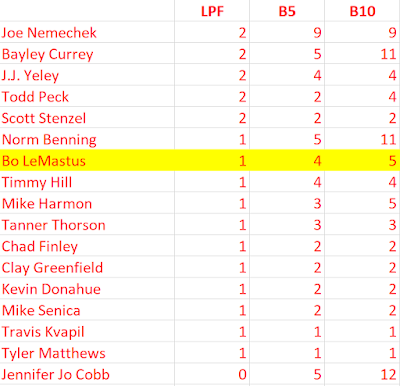