Timmy Hill picked up the 9th last-place finish of his Monster Energy NASCAR Cup Series career in Sunday’s Can-Am 500 at the ISM Raceway when his #66 Rewards.com Toyota fell out with an oil leak after 40 of 312 laps.

In the aftermath of the engine fire at Martinsville and the engine-related withdrawal at Texas, there were doubts that Timmy Hill would run on Sunday at all. Though the #66 appeared on the preliminary list, the car was briefly listed as withdrawn on racing-reference.info. It was ultimately a sponsor obligation to Rewards.com that forced their hand, and Carl Long confirmed on Facebook the car would be at the track.

Long’s team, Motorsports Business Management, brought two Cup cars to the track. The primary was the same chassis the team fielded in Indianapolis, where Hill ran 35th. The second, swapped on Saturday into MBM’s XFINITY hauler, was prepped for Homestead next week. The Homestead car differed from the ISM car as it had a white Toyota decal on the rear bumper. One of MBM’s three XFINITY cars was driven by Tyler Hill, Timmy’s younger brother, who made his series debut in the #13 CrashClaimsR.us Dodge. In that race, Tyler recovered from an early spin to bring the Dodge home in one piece in the 31st spot.

To work around the sealed engine issue from Texas, Timmy Hill’s Cup car was entered under the “No. 166” owner points of Mark Thompson, who acquired his own NASCAR owner license to run this year’s Daytona 500. Unlike MBM’s “No. 66” owner’s ranking, Thompson’s still had races eligible to seal an engine for Homestead. This put Hill in contention to challenge Corey LaJoie, who was swapped out for Cole Whitt at TriStar, for the 2018 LASTCAR Cup Series Championship.

Hill began the weekend 38th of 39 entered drivers in Friday’s opening practice and secured the 37th starting spot in qualifying with a lap of 131.114mph (27.457 seconds). Hill was slowest of the 38 drivers who turned laps in Saturday’s first session, then ran 38th of 39 again in Happy Hour.

The 39th driver in those sessions was Cody Ware, who endured a trying weekend at the track. Heading through Turns 3 and 4 on his warm-up lap, Cody Ware’s brake pedal went to the floor. Ware slid up the track and slammed the outside wall with the right-rear corner, then quickly with the left-front. Ware walked away uninjured, but the car, towed back to the garage, was destroyed.  The right-front wheel was marked with blue paint from the outside wall and the right-rear was pushed in several inches. Team owner Rick Ware looked under the hood and immediately noticed brake fluid on the left-front wheel. We caught up with Cody Ware shortly after he was released from the care center:

“I checked it in the dogleg, coming up to my green flag. And as soon as I got into 1 – I guess it’s Turn 3 now, it just went to the floor. I didn’t even make a full lap, I hadn’t even gotten to the checkered flag, or the start / finish line yet. Just got through the dogleg, was heading into Turn 4, or Turn 3. As soon as I got into Turn 3, touched the brakes, and it went straight to the floor. We must’ve lost a bleeder in the left-front with the fluid on the left-front tire.”

Cody Ware confirmed the team didn’t have a backup car in their hauler, meaning they would likely have to withdraw. However, by 3:30 P.M., a deal was worked out. After at least one crewman came by the Premium Motorsports hauler, the team was soon preparing Premium’s backup, putting car #51 on the doors. The car, the #7 Sustainable Quarry Chevrolet that Reed Sorenson piloted last week in Texas, now had the #15 decals from Ross Chastain’s Cup car put in the reverse order, fashioned into a #51 over each #7. However, with only minutes left until qualifying, the car never hit the track to make a lap, and took the 39th spot as a result. On Saturday after the XFINITY Series race, the Ware crew further adjusted the paint scheme, but NASCAR told them to stop applying the roof decals when they worked fifteen minutes after the garage area closed. This work was finally done race morning, at which point the crew polished the car.

Also involved in a practice accident was Paul Menard, who blew a left-rear tire entering the same corner and backed hard into the outside wall. Menard was uninjured, and the Wood Brothers Racing team had already unloaded and begun preparing the backup before the flatbed arrived with the primary. Only Menard and Ware incurred pre-race penalties. While Ware’s penalty didn’t alter his starting spot, Menard had to surrender the 11th spot.

On the break, Ware remained in the 39th spot, and Paul Menard’s early moves dropped D.J. Kennington – driving the primary #7 Chevrolet from Premium Motorsports – to the 38th spot. Ware caught Kennington’s APC / Northern Provincial Pipelines machine, but the #7 pulled away and soon after passed Tanner Berryhill, who was making his Cup Series debut in Obaika Racing’s #97 Excel Therapy / Maxium Off-Road Toyota. Ware had more success catching Berryhill, running alongside him on Lap 8, then completing the pass at the stripe on Lap 11. On Lap 14, race leader Kevin Harvick put Berryhill a lap down, and the newcomer worked his plan to try and stay out of the leader’s way, losing a second lap on the 31st circuit.

Hill entered the last-place picture when he pulled into the garage area around Lap 42. The driver confirmed the #66 had an oil leak, and the team had difficulty figuring out where it was coming from. In their garage stall near the end of Garage Building #5, the team jacked up the driver’s side, then did the same with the passenger side and put the car on jack stands. On Lap 94, he was joined in Garage #4 by J.J. Yeley in the #23 She Beverage Company Toyota, a coordinated effort between the NY Racing Team and Front Row Motorsports. Yeley’s car also had a leak, originally called a mechanical issue by NASCAR officials. The driver thought the smoke he smelled was from Menard’s backup car, but it turned out his own engine was on the brink. Yeley climbed from his car, and shortly thereafter the team brought out the cargo straps to load it in the hauler.

With a 48-lap margin between Hill and Yeley’s machines, Hill had until Lap 263 – 49 laps to go - to get back on track if he was to pass Yeley for 38th. But by Lap 204, the #66 was listed as “unavailable” on RaceView, and shortly after was listed as “out” on the official timing and scoring. At that point, the MBM team was still working on the car, and had removed the shifter and gearbox from under the machine. The team prepared to load up the #66 after that, done for the day. Long elected on Saturday to move Hill’s Cup car for Homestead to their XFINITY hauler, so Hill’s car from Sunday’s race would join Akinori Ogata’s XFINITY #66 that ran 33rd on Saturday.

During this time, the action picked up on the track with several top teams suffering tire-related accidents. Just as Yeley pulled into the garage, a blown left-rear sent Joey Logano’s #22 Shell / Pennzoil Ford into a spin entering Turn 1, ending his day after 95 laps. Daniel Suarez fell out just one lap later after his #19 Stanley Tools Toyota rear-ended eventual 7th-place finisher Matt Kenseth, destroying the nose of the #19. It was some time before Logano’s car finally made it back to the garage on a flatbed, but when it did, Clint Bowyer suddenly rolled into the garage, the rear decklid trailing behind his #14 ITsavvy Ford following still another wreck on Lap 134.

LASTCAR CHAMPIONSHIP UPDATE
With Hill’s fourth last-place finish, he remains the only challenger still in contention to take the 2018 LASTCAR Cup Series Championship. The scenario is simple – Hill must finish last to take the title. Otherwise, Corey LaJoie will claim it, even if he isn’t entered in the race. 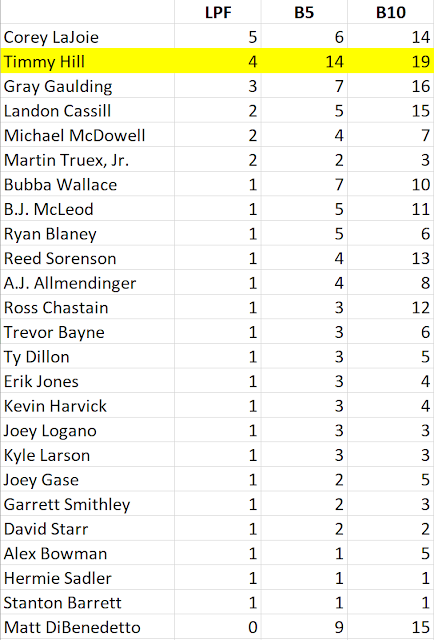