XFINITY: Michael Annett finishes last after big teams wipe each other out on the start at Kansas

Michael Annett picked up the 3rd last-place finish of his NASCAR XFINITY Series career in Saturday’s Kansas Lottery 300 at the Kansas Speedway when his #5 Pilot / Flying J Chevrolet was collected in a multi-car pileup at the start, preventing him from completing any of the 200 laps.

The finish, which occurred in Annett’s 106th series start, was his second of the year and first since Las Vegas, four races ago. In the XFINITY Series last-place rankings, it was the 10th for car #5, the 321st from a crash, and the 516th for Chevrolet. Across NASCAR’s top three series, it was the 33rd for the #5, the 1,166th from a crash, and the 1,631st for Chevrolet.

In the three races since his last-place run at Las Vegas eliminated him from the Playoffs, Annett earned three top-twenty finishes: a 14th at Richmond, a 20th on the Charlotte “Roval,” and a 12th at Dover for his best run since Darlington. He had similarly earned solid finishes in the XFINITY Series at Kansas – in all but one of his previous starts, he’d run no worse than 16th with a track-best 8th for Richard Petty Motorsports in 2012.

Annett was one of 42 drivers originally entered in Saturday’s race, a group which increased to 43 when RSS Racing fielded a new fourth team, an unsponsored #37 Chevrolet, for J.J. Yeley. Yeley had been moved from RSS’ #38, which at Kansas went to Angela Ruch. However, just like Ray Black, Jr.’s drive for Mike Harmon on the Roval, this RSS car carried the recognizable yellow door and roof numbers of B.J. McLeod Motorsports, indicating it was likely a McLeod car fielded by RSS.

While both Yeley and Ruch qualified for Saturday’s race, three other teams weren’t so fortunate. First to miss the cut was Max Tullman, who selected Kansas to make his third and final XFINITY start of the season for his new team, Tullman Walker Racing. After running 27th and 25th in both practices, Tullman’s #26 Eskata / Zoomi Ford failed to make it through pre-qualifying inspection before the end of Round 1, and with only two previous starts on the year, was eliminated on Owner Points.

Third to miss was Bayley Currey, originally not listed as driver of JP Motorsports’ #55 Rollin Smoke Barbecue / Touched by Pros Toyota. It was Currey’s first DNQ after successfully getting the car in for his last nine attempts.

Starting 40th and last on Saturday was owner-driver Jeremy Clements, who like Tullman was unable to turn a lap in qualifying, leaving his #51 RepairableVehicles.com Chevrolet in the final spot. Clements moved up three spots prior to the start, however, as three cars dropped behind him on the pace laps. Mike Harmon surrendered 38th due to unapproved adjustments on the #74 The Journey Home Project Chevrolet while engine changes dropped 22nd-place Ross Chastain in the #4 JD Motorsports Chevrolet and Alex Labbe, 27th in time trials in the #36 AlphaPrimeUSA.com Chevrolet.

Ironically, those running at the back of the pack were in the safest place for the start of the race, when no less than four Playoff contenders triggered a massive wreck. Heading through Turns 1 and 2, third-place Justin Allgiaer lost control of his #7 BRANDT Professional Agriculture Chevrolet and slid up into outside-polesitter Christopher Bell in the #20 Rheem Toyota.  Trapped behind Allgaier in the outer groove, was 4th-place starter Austin Cindric in the #22 Menards / Richmond Ford, who crossed the nose of Cole Custer’s #00 Haas Automation Ford and was bumped by Chase Briscoe’s #98 Nutri Chomps Ford. As Cindric and Custer spun to the inside, Annett was running to the inside of Ryan Reed’s #16 Lilly Diabetes Ford and following Ryan Truex’s #11 Leaf Filter Gutter Protection Chevrolet to the apron. Truex clipped Cindric’s car, which now slid directly into Reed and Annett’s path. While Reed managed to turn right at the last minute, Annett plowed into Cindric with a closing Spencer Gallagher doing the same in the #23 Allegiant Chevrolet.

In all, nine cars were involved in the wreck. Cindric and Annett suffered the most damage, and both cars had to be towed back to the garage. By qualifying behind Cindric’s #22, Annett was classified last with Cindric 39th. Allgaier pulled behind the wall, completing his only lap in the process and finishing 38th. Bell made just one more circuit before taking 37th. Rounding out the Bottom Five was Bell’s teammate Brandon Jones, whose #19 Game Plan For Life Toyota wrecked on the backstretch shortly after the restart.

The accident presented a golden opportunity for several drivers, including John Hunter Nemechek, who scored his first XFINITY Series win in his 15th start, just three races after Ross Chastain ended his own “oh-fer” streak in the same car. Shane Lee earned a career-best 3rd in his 10th start driving Richard Childress’ #3. And Ty Majeski, driving the struggling #60 from Roush-Fenway Racing, turned in an 8th-place showing in his first-ever Kansas start.

Underdogs also had their day in Kansas as they filled much of the rest of the Top 20:

Leading the group was Ryan Sieg in his #39 Frank Foster ‘Til I’m Gone Chevrolet. Sieg finished 9th, the first car one lap down, for his second top-ten finish of the season and first since a 6th at Talladega, nearly matching his track-best 8th in this race back in 2015.

Jeremy Clements went from last on the grid to finish 10th for his own second top-ten of 2018 and first since an 8th at Richmond. Prior to Saturday, Clements had never finished better than 17th at Kansas, which came back in 2014.

Alex Labbe’s new engine proved stout in the race, as his #36 rebounded from his tail-end penalty to finish 12th, his third-best run of the season behind a 9th at Mid-Ohio and an 11th at Bristol. Both Labbe and teammate Josh Williams in 24th improved on DGM Racing’s previous best finish at Kansas of 26th by Martin Roy two years ago.

JD Motorsports took the next two spots with Garrett Smithley’s #0 Chevrolet in 13th and ARCA driver Quin Houff in 14th. For Smithley, it was his best run of 2018 since Talladega, where he finished 10th. For Houff, it was the second-best finish of his career, just two spots short of matching his 12th at Iowa last summer for Precision Performance Motorsports.

Chad Finchum in 16th steered Carl Long’s #40 Smithbilt Homes / The Preserve Toyota to its second-best run of the season, two spots shy of their 14th-place showing under the lights at Daytona in July. It also made Finchum the highest-finishing Toyota in the race. Prior to Saturday, a Motorsports Business Management car had never finished better than 31st at Kansas. Bobby Dale Earnhardt, driving MBM’s #66, also eclipsed that mark with a 27th-place finish in the HABCO Toyota.

David Starr’s #52 Wilkerson Crane Rental Chevrolet from Jimmy Means Racing finished 17th, his best finish since Indianapolis, five races ago and the best-ever for a Means car at Kansas, besting Gase’s 19th-place run back in 2012.

Spencer Boyd’s 19th-place finish was the best for SS-Green Light Racing since Daytona in July, where they ran 17th, and their second-best of the season, bouncing back from three DNFs in his last five starts in the #76 Grunt Style Chevrolet.

Rounding out the group was Josh Bilicki, who avenged the DNQ’d Bayley Currey in the team’s #55 to give JP Motorsports a 20th-place finish. Bilicki’s #45 Prevagen / GNC Toyota cracked the Top 20 for the first time since Mid-Ohio, where he ran in the same spot.

LASTCAR STATISTICS
*This marked the first time the bottom two finishers failed to complete a lap in a NASCAR points-paying race since November 17, 2017, when both Ray Ciccarelli and team owner Jennifer Jo Cobb trailed at Homestead. It hadn’t happened in the XFINITY Series since October 10, 2014, when last-placer Jeffrey Earnhardt retired on the first circuit along with J.J. Yeley. In Cup, it hasn’t happened since June 25, 2006, when the bottom three failed to reach the stripe – last-placer Tom Hubert, 42nd-place Sterling Marlin, and Ken Schrader in 41st – all collected in a wreck. 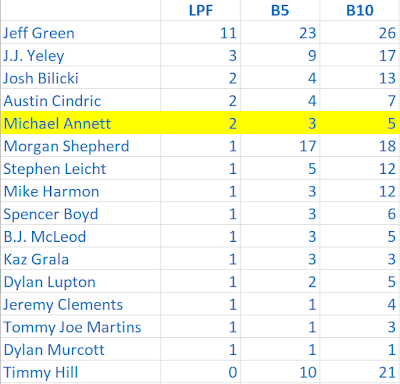