TRUCKS: Chad Finley’s last-place finish a footnote to his continued determination to make it in NASCAR

Chad Finley picked up the 1st last-place finish of his NASCAR Camping World Truck Series career in Saturday’s Texas Roadhouse 200 at the Martinsville Speedway when his #33 Auto Value / Strutmasters.com Chevrolet was involved in a crash after 35 of 200 laps.

A second-generation racer from Dewitt, Michigan, Finley began racing go-karts when he was ten, earned a championship when he was eleven, and transitioned into the ASA Late Model Series at fifteen. Two years later, Finley followed his father Jeff’s career path into the ARCA Racing Series. The younger Finley teamed with the Keselowski family to run in the ARCA Racing Series, where he finished 6th in his debut at Toledo and took the pole in the next-to-last series event at Rockingham.

In the years since, Finley has competed part-time in ARCA in between repeated attempts to break into NASCAR competition. The first of these attempts was the June 18, 2011 XFINITY Series event at his home track, the two-mile Michigan International Speedway. Finley picked up a ride with veteran team owner Ed Rensi, who was facing sponsorship issues for his single-car operation. Finley brought with him sponsorship from Auto Value Certified Service Centers, which backed many of the driver’s efforts, but a wreck in practice forced the team to withdraw. This turned out to be the Rensi team’s final entry into a NASCAR race, twelve years after his father Jeff gave the team its first XFINITY start at Daytona in 1999.

In 2015, Finley looked to the Truck Series, where his father raced in 2002. This time, the Auto Value sponsorship decorated the #30 Ford of a new start-up team founded by Mark Rette. The pair’s first attempt again came at Michigan, where this time the youngster qualified a solid 15th and finished 21st, four laps down. He qualified again three rounds later at Chicagoland, where he matched his 21st-place finish. But, after Terry Jones drove for Rette twice more, this team also shut down.

Undeterred, Finley continued to capitalize on whatever opportunities he could find. On October 18, 2015, Finley started 6th in the All American 400 exhibition, led 19 laps midway through the event, and finished 4th in a race won by current XFINITY regular Daniel Hemric. On December 6, 2016, he dominated the Snowball Derby at Five Flags, leading 169 of 300 laps before the engine let go. Then on April 8, 2017, again at Nashville, he took his first checkered flag in ARCA competition, leading nine laps and passing current Cup Series part-timer Kyle Weatherman with just two laps to go.

The momentum culminated this past June, when both Finley and family returned to Truck Series competition at Gateway, carrying additional sponsorship from Strutmasters.com. In the driver’s first attempt in nearly three years, Finley not only bested the two teams he needed to beat in qualifying, but started 20th and finished 6th, besting all but two of the six Playoff drivers still competing for the title on Saturday. The #42 Ford returned two months ago at Bristol, but after qualifying 12th, the engine let go short of the halfway point, leaving him 30th.

Martinsville marked Finley’s first Truck Series start since Bristol. This time around, he would drive for owner-driver Josh Reaume’s team, Reaume Brothers Racing, in the #33 Chevrolet. Finley took the place of Robby Lyons, who remained with the Reaume team at the track, with Auto Value, Strutmasters.com, and Airlift as sponsors.

With rain cancelling all track activity on Friday, Finley would once again have to pull off a strong qualifying lap. This he again accomplished, timing in 20th of the 35 entries with a lap of 92.910mph (20.381 seconds). It was the best qualifying run for the Reaume team all season, better than Reaume’s own 22nd-place run at Chicagoland.

Three teams failed to qualify on Saturday morning. Just sixteen-hundredths of a second kept Norm Benning from starting in his #6 H&H Transport Chevrolet, followed by Ray Ciccarelli in Jennifer Jo Cobb’s second truck, the #0 CMI Installations Chevrolet. Third to miss was Landon Huffman, who lost control of Al Niece’s #38 Plan B Sales Chevrolet during qualifying and was struck by the #49 SobrietyNation.com Chevrolet of D.J. Kennington. Kennington secured 24th on his Round 1 speed while Huffman, with no timed lap, was sent home.

Starting 32nd on Saturday was the #10 Driven2Honor Chevrolet of Jennifer Jo Cobb, who was upset with NASCAR over the lack of pre-qualifying practice. In a Facebook post, Cobb messaged that she would not be able to acquire used practice tires from other teams, nor would she be able to address several minor issues with her truck, including the splitter, brakes, and seat belts. Such adjustments after qualifying incurred Cobb a redundant unapproved adjustment penalty, the same thing that flagged Kennington for repairs from the Huffman incident as well as the #22 AM Technical Solutions / Go Texan Chevrolet of Austin Wayne Self and the #20 Go Share Chevrolet of Tanner Thorson.

Thorson, the last-place finisher at Las Vegas, was the first to pull behind the wall on Lap 3 with brake issues of his own. On Lap 36, he returned to action a full 33 laps down to the leaders. But that same lap, Thorson would be denied the 32nd-place finish. Running by himself, Finley (according to Lyons’ tweet) lost his brakes entering the third corner and slid up the track. Video showed the truck complete a 180-degree turn before smashing the wall with the left-rear, then the left-front. Finley climbed out unhurt, and the truck was towed to the garage area, done for the afternoon. Thorson passed Finley for last around Lap 69, but advanced no further than 31st before he retired in the closing stages.

Finishing 30th on Saturday was John Hunter Nemechek, who burned the rear gear inside the final 30 laps. These were to be the only three DNFs of the afternoon. In 29th came Cobb, who finished under power, though 11 laps back of race winner Johnny Sauter. Closing out the group was Brad Foy, who like Finley earlier this year had been waiting to make his return to the Truck Series. After two unsuccessful attempts to make a Martinsville race in 2015 and 2016, Foy secured the 31st spot on Owner Points in Premium Motorsports’ #15 Strutmasters.com Chevrolet and finished 28th, six laps down.

For more on Chad Finley, check out his website at this link. 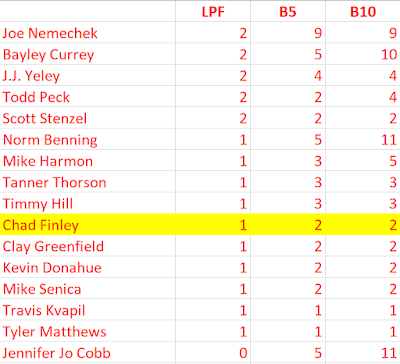