K&N WEST: David Hibbard’s second K&N race not one at all

David Hibbard is a name known to few, if any, stock car racing fans. Hibbard’s wheelhouse is sprint car racing, as the Oregon native has gained notoriety in the Pacific Northwest for his acumen in that discipline. The 38-year-old has been racing sprints in Oregon for some time, running the inaugural Southern Oregon Sprint Series season in 2013 and finished seventh in points. He then went on a tear this summer, winning five races. Hibbard also has a son, Bailey, who is also a sprint car racer. Bailey is proving to be a chip off the old block, scoring top-fives in sprint car A-mains this summer. David made his debut in a second entry from the Rich DeLong stable, starting last in the field but working his way up to fifteenth, finishing three laps down.

Last week's entry list showed sixteen cars, which is quickly becoming average to above-average. Former series champion Chris Eggleston headlined the cast of part-timers, driving a one-off for Bill McAnally Racing. Taylor Canfield returned with a new car number and a new paint scheme after a less-than-great debut at Idaho. Travis Milburn returned for another ride in the 08 car, and Nick Joanides returned with his part-time schedule in the 77 car. Rich DeLong returned in his familiar #84, and Rudy Vanderwal was entered again in the #34.

Eggleston led the first practice session, wheeling his #50 to a lap of 13.951 seconds around the one-third-mile track. Hibbard ran the most laps of anybody in the field with 56 but could only manage a lap eight-and-a-half tenths slower than Eggleston, slowest of anyone in the field. Second practice was much the same story as the first – Eggleston led, and Hibbard was slowest. In qualifying, Hibbard still trailed the field, a second behind polesitter Cole Rouse.

Hibbard’s effort came to an end early Saturday night. His #64 machine went down during pace laps with transmission issue, with vague “mechanical” issues as the originally listed culprit. The race’s 15th finisher, Derek Kraus, completed less than half of the laps but finished running. An early spin with Thorn derailed what was already a below-average night for the Wisconsin native, and he logged laps from there on out, completing 92. Rudy Vanderwal was the next retiree from the race, with brakes at fault for his first DNF of 2018. His son Kody fell out with drive train issues after 117 laps. Eggleston rounded out the Bottom Five, his Toyota careening hard into the Turn 3 wall on a restart near the three-quarters mark of the race. 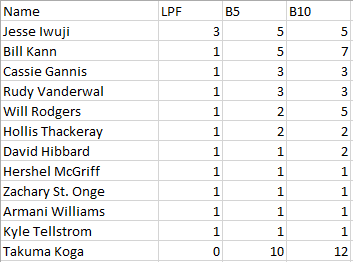