McGee grew up in the Lake Tahoe area of California dreaming, like many do, of being a NASCAR driver. Like most, life had other plans for him and the dream was left alone. In 2017, the then-35 year old decided to revisit that dream, running a season of Baby Grands at Alaska Raceway Park (ARP). He returned to ARP for another season of Baby Grands this year, winning the final two features of the season. After the season ended the first weekend of September, he raced a Legends car on dirt to try and expand his horizons. He also went down to Talladega with a group of friends for the fall race, where he found his way on-camera, being interviewed by NBC personality Rutledge Wood during the race.

As for debuting in the K&N Series? McGee only announced it on his Instagram page on Wednesday before the race, showing a fully prepped car in the Patriot Motorsports Group shop. He joined eighteen other cars on the initial entry list. Taylor Canfield and Travis Milburn rounded out PMG’s slate of drivers. Ron Norman returned in his #40, and David Mayhew came back for his third race this season with Steve McGowan racing and the #17 team. Perhaps the most anticipated story on the entry list was a new father-son combination in NASCAR: veteran racers Billy and Bill Kann were slated to compete in their first K&N West race together. Unfortunately, it was not meant to be, as the elder Billy withdrew the week of the race.

Only sixteen cars participated in first practice. Of those, Canfield was the slowest, his lap of 20.415 seconds almost two seconds behind Ryan Partridge’s hot laps. Second practice was nearly identical. This time, all eighteen cars took to the track. Partridge again led with a lap in the 18.5-second range, and the last-place car again ran a lap in the 20.4-second range. Instead of Canfield trailing, McGee was at the rear this time around, running only sixteen laps around the half-mile track. Speeds got more spread out during qualifying, as the top of the field dropped their times, led by Hailie Deegan’s 18.3-second lap. McGee did not put down a great lap in qualifying, his lap of 20.7 a full half-second off of Canfield in 17th.

McGee called his K&N debut a “dream come true”. Unfortunately, this time it only lasted about eight minutes, as the #39 exited after sixteen laps with clutch issues. PMG teammate Travis Milburn was next to retire, citing suspension issues after 31 laps. Rich DeLong III was the only other car to retire from the event, an oil leak proving too much to overcome after 137 laps. Ron Norman was the last car running, finishing ten laps down. Canfield rounded out the Bottom Five, finishing eight laps down. 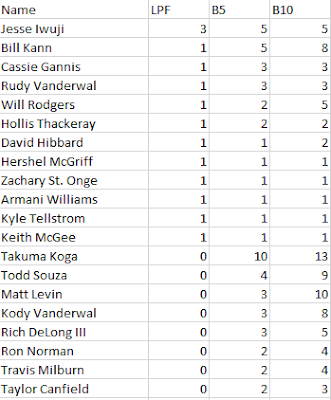