CUP: Not all Fords had it easy at Talladega – Front Row Motorsports struggled with mechanical woes

Michael McDowell picked up the 30th last-place finish of his Monster Energy NASCAR Cup Series career in Sunday’s 1000Bulbs.com 500 at the Talladega Superspeedway when his #34 Speedco / Rotella Ford finished under power, completing 155 of the race’s 193 laps.

In doing so, McDowell broke a tie with the late J.D. McDuffie for the fifth-most last-place finishes across all three of NASCAR's top divisions.

Ever since Las Vegas, McDowell has enjoyed a handful of mid-pack performances in his first year for Front Row Motorsports, not to mention a brilliant run at Daytona in July. After a 9th-place finish in this year’s Daytona 500, McDowell qualified 8th for the 400 and led 20 laps, pacing the field as early as Lap 89 and as late as Lap 113 before he was collected in a pile-up with just five laps to go in regulation. It was the third of five DNFs the Phoenix native had collected since Las Vegas, all of them due to crashes. With five top-twenty finishes in the last ten races headed to Talladega, McDowell looked to turn things around on the plate tracks.

McDowell was one of 41 drivers competing for spots in the 40-car field, and one of the 36 locked-in by virtue of his Charter. He ran 27th in the lone practice session and came just two-hundredths of a second short of making Round 2 with the 14th-best lap of 192.509mph (49.743 seconds). Further back, two-tenths of a second sent home Obaika Racing, which late in the week hired David Starr to attempt their first Cup Series race. Using both a hauler and car acquired from BK Racing, Starr’s #97 Vroom! Brands / Brand South Africa Toyota ran faster than two Chartered cars, but was sent home for not catching 38th-place Landon Cassill in StarCom Racing’s #99 Chevrolet.

The 40th and final starting spot was to go to Cody Ware, the second Chartered car Starr beat in qualifying. Ware’s turn in the #51 Jacob Companies Chevrolet yielded the slowest lap of the session, a lap of 183.136mph (52.289 seconds). However, 39th-place qualifier Corey LaJoie failed his first go-round in post-qualifying inspection, sending the #72 Winn-Dixie Chevrolet to the back of the grid for Sunday. LaJoie, whose car passed inspection on the second go-round, would incur a redundant tail-end penalty on Sunday for unapproved adjustments, soon to be followed by 37th-place starter Joey Gase (#00 PFK Foundation Chevrolet) and 34th-place Kyle Larson (#42 Credit One Bank Chevrolet).

On Sunday’s pace laps, LaJoie held the 40th spot on the high side of Row 20 with Ware to his inside. Both dropped to the back a second time after Larson joined them. Falling back voluntarily were Premium Motorsports teammates D.J. Kennington (starting 33rd in the #7 Wilride Transport Ltd. Chevrolet) and Ross Chastain (36th in the #15 Xchange of America / Solomon Plumbing Chevrolet). After sorting themselves out, Kennington pulled to the inside of LaJoie in the final row with Ware to the inside of Chastain in Row 19.

When the green flag dropped, Kennington trailed in the high lane, but caught Ware to his inside, putting the #51 back to last as the field crossed the stripe. Moments later, however, the group screamed past 16th-place qualifier David Ragan, who was carrying sponsorship from the race’s title sponsor 1000Bulbs.com. Ragan had been running among the leaders on Lap 1 when his car lost oil pressure in the outside lane, forcing him to jump to the third lane and out of danger. The #38 then fell to the back of the field, losing a lap as he made it down to the apron. The crew looked under the hood, noticing just 13 pounds of oil pressure, then managed to get him back on track on Lap 6, five laps back of the leaders. Ragan then lost oil pressure just past pit exit, forcing him to the garage on Lap 9, just seconds before Jeffrey Earnhardt drew the first caution for spinning the Gaunt Brothers’ #96 Xtreme Concepts / iK9 Toyota. By Lap 29, the Ragan crew managed to get the #38 out on track a second time, 20 laps down in last, but at full speed.

Front Row Motorsports’ day went from bad to worse around Lap 77, when McDowell first encountered trouble. As with Ragan, McDowell pulled behind the wall under green, citing a problem with the right-front wheel. The crew discovered a problem with the right-front hub, and though NASCAR.com’s RaceView pulled the #34 off the screen on Lap 87, the team continued to work on their repairs. McDowell took last from his teammate on Lap 98, then on Lap 114 was rolling again in the garage area, just in time for the caution that ended Stage 2. The Ford rejoined the race 37 laps down, then lost a 38th on the ensuing restart as he pulled high to let the leaders pass. At the time, all 40 entrants were still running with much of the Final Stage left to run.

For the rest of the afternoon, McDowell and Ragan didn’t lose another lap, but neither were able to climb past the handful of drivers having trouble further up the running order. On top of Earnhardt’s early spin, single-car incidents involving Jimmie Johnson, Kyle Larson, and Jamie McMurray did not eliminate all three drivers from competition – in fact, both Johnson and Larson finished on the lead lap in 7th and 11th, respectively. Thus, on Lap 150, all lead-lap cars were eliminated from last-place contention, and with the same 18-lap gap between McDowell and Ragan, McDowell all but secured last place on Lap 170, pending a green-white-checkered finish. While the race did end up going into overtime due to late accidents, no driver in the Bottom Five wrecked out, keeping the final five positions largely unchanged.

McDowell secured the 40th spot by his 18-lap margin over Ragan. Ware took 38th in a three-way tie with two other drivers eight laps down to the leaders. First was Earnhardt, who lost five laps after his spin, then another three by the finish. Rounding out the group was J.J. Yeley, the day’s only DNF, after his Ford rear-ended a sliding Alex Bowman with two laps to go in regulation. Yeley, whose #23 Steakhouse Elite Ford made the switch from Toyota for the first time since Front Row Motorsports owner Bob Jenkins acquired the team in August, ended up the third FRM car in the Bottom Five.

Despite a comparatively lackluster battle for the lead, a few underdogs did prevail with strong runs:

Still searching for a ride in 2019, A.J. Allmendinger led a lap in his #47 Kroger ClickList Chevrolet and finished 6th, his second top-ten finish in the last three races.

Regan Smith lost his drafting partner on the final lap, but managed to steer the Leavine Family Racing team’s #95 Procore Chevrolet to a 10th-place finish, Smith’s best finish since relieving Kasey Kahne, and the team’s best run since Kahne’s 4th at Daytona in July.

Just on the outside of the Top 10 came Brendan Gaughan, 12th in his second-straight plate race for Beard Motorsports in the #62 Beard Oil / South Point Hotel & Casino Chevrolet.

Joey Gase managed to rebound from his DNQ in the Truck Series race to finish 18th, his own season-best, improving even on his 25th in the crash-marred Coke Zero Sugar 400 at Daytona.

LASTCAR STATISTICS
*This marked the first time car #34 finished last in a Cup Series race at Talladega.
*It was McDowell’s second last-place finish in a Cup race at Talladega, and his first since May 6, 2012, when his #98 Curb Records Ford fell out with a vibration after 2 laps of the Aaron’s 499.
*The 155 laps McDowell completed were the second-most of any Cup Series last-place finisher at Talladega. The lead remains with the late Marty Robbins, who was disqualified for a restrictor plate violation after he turned 179 laps on May 7, 1972.
*This was also just the second time that a Cup Series driver finished last at Talladega while still under power at the checkered flag. The only other instance was on May 1, 2005, when Kyle Petty’s #45 Georgia-Pacific / Brawny Dodge finished 88 laps down in the Aaron’s 499. 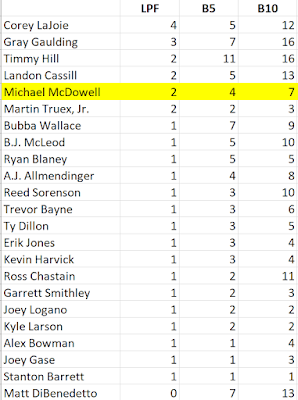