Timmy Hill picked up the 8th last-place finish of his Monster Energy NASCAR Cup Series career in Sunday’s Hollywood Casino 400 at the Kansas Speedway when his #66 Ternio Toyota fell out with engine problems after he completed 3 of 267 laps.

With the finish, Hill leapfrogs into a close second in the 2018 LASTCAR Cup Series Championship, posing the first threat to Corey LaJoie’s lead all season. By outmatching LaJoie in both Bottom Fives and Bottom Tens, Hill can take the LASTCAR lead by finishing last in any of the four remaining races. Gray Gaulding, who also has three finishes in 2018, needs two last-place runs to accomplish the same.

Following Dover, the Motorsports Business Management (MBM) team skipped the final plate race of the year in Talladega and set their sights on Kansas. Hill would run double-duty at the 1.5-mile oval, starting the weekend in the #13 OCR Gaz Bar Toyota in Saturday’s XFINITY race, then the #66 Ternio Toyota for Sunday. Just over a year after the track saw MBM make their first Cup start in May 2017, Kansas would see the Cup team debut MBM’s own in-house engine program after previously using PME Engines.

On the XFINITY side, Hill ran 29th and 26th in practice, then qualified 25th – just seven-hundredths of a second short of making Round 2. It was the seventh time in 28 starts Hill had qualified 25th or better in 2018, though a vibration after 54 laps left him 31st at the finish for his 18th DNF. On the Cup side, speed was a bigger issue. The #66 ran just 39th in the first session, 40th and last in the second, and turned in the slowest lap in qualifying with a speed of 177.708mph (30.387 seconds). Hill was the only driver to not run a lap in Happy Hour, and the team changed engines for Sunday’s race.

On Sunday, Hill incurred a redundant tail-end penalty for the engine change. Also sent to the rear were Chip Ganassi Racing teammates Jamie McMurray and Kyle Larson in similar Halloween-themed McDonald’s paint schemes. While McMurray also changed engines, Larson, in a “must win” situation for Sunday’s Playoff cutoff, wrecked his primary car in opening practice. Despite their penalties, neither Larson nor McMurray actually spent any time in the 40th spot. Reed Sorenson, lined up 39th in Premium Motorsports’ #7 Harrah’s North City Chevrolet, lagged back during the first pace lap and stayed alongside Hill in the final row. Also voluntarily falling back were Sorenson’s teammate Ross Chastain, who timed in 32nd in the #15 Durkin Tactical Chevrolet, and 38th-place B.J. McLeod in the #51 Jacob Companies Chevrolet.

Coming to the green, Larson lined up alongside McLeod with Chastain, Hill, and Sorenson trailing behind. The gap widened into the first corner, but moments later, both Hill and McLeod slid up the track, and NASCAR officials watched for possible smoke off Hill’s right-front fender. Hill managed to stay in front of McLeod as Sorenson passed them low, giving the #51 last for a brief moment.

That changed on Lap 3, when Hill made an unscheduled stop for a stumbling engine, what the crew suspected was a loose plug wire. As Hill came down pit road, he passed the pitting Daniel Suarez, whose #19 ARRIS Toyota made contact with the wall while racing Alex Bowman’s #88 Nationwide Chevrolet. Suarez retook 39th when he came back out one lap down while Hill remained on pit road. On Lap 6, the MBM crew noticed fluid underneath the #66 and pushed him behind the wall. Just behind the barrier, the crew stopped and looked over what appeared to be a loose water hose inside the engine. Then, on Lap 8, they moved the car back to their garage stall. The problem proved terminal, and by Lap 33 the car was pulled off RaceView.

Chastain took the 39th spot, having slapped the wall on Lap 41 and pulled into the garage, ending his day by virtue of the “Crash Clock.” Reed Sorenson was already in the garage when Chastain fell out of the race, fighting a car so loose the driver could barely drive it. Sorenson returned to the track and passed William Byron, whose #24 UniFirst Chevrolet blew an engine on Lap 55 and dropped oil around half the track. After returning to action on both Lap 78 and Lap 124, Sorenson climbed past Jeffrey Earnhardt, who turned 151 laps in the #96 Xtreme Concepts / iK9 Toyota before mechanical issues, before retiring himself six circuits later.

LASTCAR STATISTICS
*This marked the first last-place finish for both Hill and the #66 in a Cup Series race at Kansas.
*This was Hill’s earliest exit from a Cup Series race, having turned six fewer laps than when he was parked at Michigan on August 16, 2015. 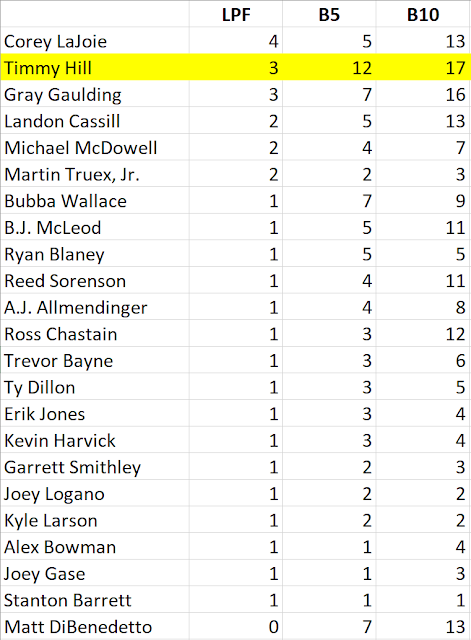