Hermie Sadler picked up the 8th last-place finish of his Monster Energy NASCAR Cup Series career in Sunday’s First Data 500 at the Martinsville Speedway when his #7 Virginia Lottery Chevrolet fell out with brake problems after he completed 230 of 500 laps.

The older brother of XFINITY Series regular Elliott Sadler, who closes out his full-time career next month, Hermie has been more well-known for his career in broadcasting, both in the pits for the Camping World Truck Series and on FOX Sports 1’s “NASCAR RaceHub.” It was on “RaceHub” this past Wednesday that Hermie unveiled the paint scheme to his #7, the second car to be fielded by Jay Robinson’s team Premium Motorsports. Sadler would be the driver, continuing a NASCAR career that dates back to 1992 and features back-to-back XFINITY wins at the Orange County Speedway in 1993 and 1994.

The car would be sponsored by the Virginia Lottery, which has not only sponsored 15 of Sadler’s NASCAR rides since 2001, but has brought on the driver himself as spokesperson for their funding of K-12 education since 1996. This particular incarnation of the Lottery paint scheme celebrated the 30th anniversary of the lottery. It also carried decals for both Breast Cancer and Autism awareness, both causes that have touched Sadler’s family personally.

With 40 cars entered for as many spots, Sunday would mark Sadler’s first Cup start of the season and only his ninth since his most recent last-place run in 2006. After running 36th in the opening practice and 37th in Happy Hour, he was slated to start 39th with the slowest completed lap in time trails of 92.497mph (20.472 seconds).

Originally, Landon Cassill qualified last for Sunday’s race when his #99 StarCom Fiber Chevrolet was the only car to not turn in a timed lap in Round 1. However, by Sunday, Cassill was one of ten drivers sent to the back for various infractions, both he and 8th-place Brad Keselowski in the #2 Thomas Built Buses Ford sent back for unapproved adjustments. Aside from those two and 39th-place Paul Menard, who changed engines on the #21 Motorcraft / Quick Lane Tire & Auto Center Ford, the remaining seven were docked for failing pre-race technical inspection: J.J. Yeley (qualified 34th in the #23 Adirondack Tree Surgeons Toyota), David Ragan (14th in the #38 MDS Transport Ford), Bubba Wallace (32nd in the #43 Pioneer Records Management, a backup car following a crash in Turn 3 during qualifying), Jimmie Johnson (23rd in the #48 Lowe’s For Pros Chevrolet), Jeb Burton (36th in the #51 Jacob Companies Chevrolet), Timmy Hill (37th in the #66 Rewards.com Toyota, a slightly altered version of the Darrell Waltrip 2000 Victory Tour throwback from Darlington), and Martin Truex, Jr. (20th in the #78 5-hour Energy / Bass Pro Shops Toyota).

Thus, by race morning, racing-reference.info showed Cassill moved from 40th up to 32nd with Truex, Johnson, Menard, Ragan, Wallace, Yeley, Burton, and Hill – the seven drivers docked for failing inspection, plus Menard’s engine change – slotted into the final eight spots according to their rank in Owner Points. Thus, last place changed hands on the grid with Hill’s #66 sitting 40th in line on pit road, awaiting Cassill and Keselowski to fall to the rear once more for their penalties. During the pace laps, Cassill pulled to Hill’s inside on the backstretch, and Keselowski slotted in front of Cassill on the inside of Row 19.

On the break, Cassill slotted into last, but he closed back in on Hill on Lap 4, then cleared him off Turn 4. Hill then caught Sadler on Lap 9, and the tail end of the field went from two-by-two formation to single-file by Lap 13. By that point, Sadler had incurred some cosmetic damage to the left-rear corner of his car when Martin Truex, Jr. nudged him entering Turn 1 on the first lap. Sadler was the first driver to lose a lap by the 22nd circuit, though he worked his way past Hill again by Lap 33.

The next last-place challenger arose on Lap 43, when Jeb Burton’s first start of the season took a detour into the Turn 2 wall. Burton’s #51 Jacob Companies Chevrolet pulled to the inside of the backstretch, letting traffic go by under the ensuing caution. Hill just cleared the lapped Burton by the entrance of Turn 3, dropping the #51 to last. While it first appeared that a right-front tire sent Burton into the wall, radio transmissions recorded by RacingUnderdogs indicated it was a melted left-front. Regardless, Burton returned to the track on Lap 46, now four laps back of the leaders. He was six behind at the end of Stage 1 on Lap 132.

By Lap 221, Burton was seven laps down when Hill began a series of compounding struggles. After a green-flag stop, the jack got stuck under the driver’s side of his car, forcing a second stop to remove it from the side skirt short of the left-rear wheel. A crewman came over the wall too soon, forcing another stop, ultimately dropping him nine laps back and into 40th place. Following this, both Regan Smith in the #95 WRL General Contractors Chevrolet and Austin Dillon in the #3 Dow Chevrolet fell off the pace and spent several laps on pit road, as did Sadler in his #7. While both Smith and Dillon returned to the track laps down, Sadler pulled behind the wall with brake issues. By Lap 249, Sadler had taken last from Hill, and on Lap 269 the crew radioed “We’re done” and instructed the team to break down their pit equipment. The #7 was pulled off RaceView on Lap 288.

Finishing 39th was William Byron, whose #24 Liberty University Chevrolet exploded a brake rotor and backed into the Turn 4 wall on Lap 366. Hill wound up 38th, his rough afternoon ending with a detonating engine that caused flames to shoot from behind both front wheels. Hill steered his Toyota onto pit road, where quickly climbed out and crews put out the flames. With Hill uninjured, the crew tried to laugh off the situation, though the team remarked that the hood was the car’s most expensive part. “I think we have one-upped DW on his flames,” someone said. “Well, we got TV time,” said another.

Taking 37th was Kyle Larson, whose #42 First Data / Clover Chevrolet lost an engine exiting Turn 2 and stopped in Turn 3, requiring a lengthy clean-up to get fluid and the car off the track. Rounding out the Bottom Five was Matt DiBenedetto, whose Halloween-themed #32 Keen Parts / CorvetteParts.net Ford had an extended stay behind the wall during Stage 3 and finished 49 laps down, just a few carlengths in front of the last-lap battle between leaders Joey Logano and Martin Truex, Jr.

LASTCAR STATISTICS
*This marked the first last-place finish for car #7 in a Cup race at Martinsville since April 2, 2006, when Robby Gordon’s #7 Menards Chevrolet lost an engine after 7 laps of the DirecTV 500. Sadler was entered in that race as well, but failed to qualify after he was the slowest of the 49 entered drivers to attempt the field. It's the first time the number finished last in any Cup race since last fall at Talladega, when Justin Marks fell out after crash damage.
*Sadler’s 451-race gap between last-place finishes in Cup stands at 12 years, 4 months, and 22 days, ranked fourth among the longest streaks between finishes behind Joe Ruttman (15 years, 6 months, 22 days, or 494 races from 1988 to 2004), Mark Martin (14 years, 11 months, 5 days, or 440 races from 1982 to 1996), and just last month at the Roval, Stanton Barrett (12 years, 11 months, 7 days and 464 races from 2005 to 2018). 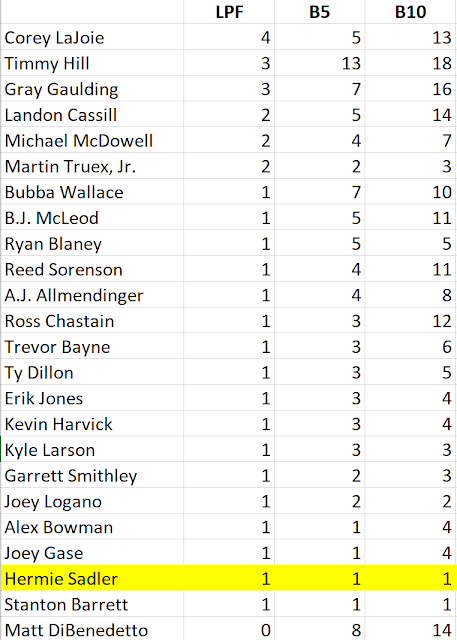