Brad Smith finished last for the 13th time in his ARCA Racing Series career in Saturday night’s Kansas ARCA 150 at Kansas Speedway when his #48 Brad Smith Motorsports Ford retired with a vibration after 1 of 100 laps. The finish came in Smith’s 328th series start, and was his first since Charlotte, 14 races ago.

Since the last time Smith has trailed the field, the Brad Smith Motorsports team has gone through ups and downs. The team picked up sponsors Copraya Web Design and HIE Publishing, but on-track results have been rough, with the team failing to finish the previous three races before Kansas.

ARCA’s final race of the year was its first on an intermediate since Chicagoland - and accordingly, attracted many of the drivers known for driving intermediates and superspeedways. Leilani Munter and Michael Self filled out Venturini Motorsports’ three-car stable, Truck drivers Harrison Burton and Todd Gilliland were entered, and some local(ish) drivers were also entered, including Kevin Hinckle and Eric Caudell.

It is often a surprise when a lower-funded team enters another car or a different driver at a race, but when one of the top teams in the series does it, it serves notice. That happened twice at Kansas, with Toyota test driver Drew Herring popping up out of nowhere to pilot a second Joe Gibbs Racing car and Anthony Alfredo drove a fifth MDM Motorsports car. Cole Glasson drove a second Win-Tron Racing car, Tyler Hill returned to Fast Track Racing, and L.B. Skaggs made his first Kansas start.

Two cars, however, did not make it. J.J. Pack withdrew his family effort, and Jesse Iwuji and his Patriot Motorsports Group team did not enter. Kansas was the seventh race on the team’s original slate, but due to trying circumstances, perhaps their rash of early-season wrecks, the PMG team decided not to enter.

Sheldon Creed clinched the ARCA championship by completing a lap in practice. He also recorded the fastest lap in practice, more than seven seconds ahead of Smith, the slowest car. Cars were all spread out through the order, with only twelve cars running within a second of the leader. Qualifying was much the same way, as Herring put on a clinic to secure the pole. Smith did not take a timed lap (the team had been dealing with overheating issues throughout the day), but the slowest driver who did, Wayne Peterson Racing’s Con Nicolopoulos, was more than six seconds back of Herring.

The race for last was over quickly by some standards, but it was about average for ARCA. Smith completed a lap and then pulled into the garage, avoiding the multitude of incidents that would occur during the race. The team found the issue to be something with a vibration and running hot, but did not expand upon that. The team did, however, strike a note of resilience, hinting at another season next year and some hard work in the shop over winter.

Mike Basham wheeled his #34 behind the wall after 10 laps, victim of a car that didn’t want to handle. L.B. Skaggs pulled his #71 behind the wall three laps later due to rear end issues. Then, the carnage started. Todd Gilliland finished 22nd after blowing a right front tire near the quarter mark of the race, and Joe Graf Jr. rounded out the Bottom Five after wrecking himself and Travis Braden on Lap 34.

Crash victims filled out four more spots, and at the top of the Bottom Ten was Con Nicolopoulos of Wayne Peterson Racing. The WPR team fixed up its old intermediate Dodge for the final race of the season, looking to run about three quarters of the race. They exceeded that goal, running 82 of 100 laps in the final race that the old-style cars were allowed on intermediate tracks. In 2019, ARCA will move to composite cars only on all tracks over three-quarters of a mile in length, a blow to some teams that may have only one or two composite bodies in the shop. 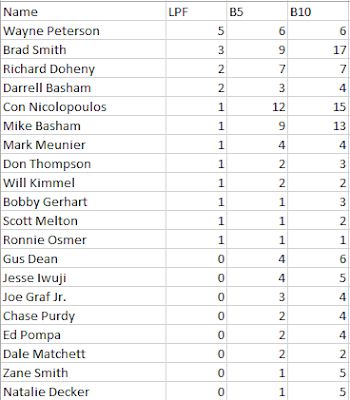