Jeff Green picked up the 113th last-place finish of his NASCAR XFINITY Series career in Monday’s Lilly Diabetes 250 at the Indianapolis Motor Speedway when his unsponsored #93 RSS Racing Chevrolet fell out with a vibration after 8 of 100 laps.

The finish, which occurred in Green’s 505th series start, was his 11th of the season and first since Road America, two races ago. With eight races to go, Green holds an eight-finish lead over two-time finishers J.J. Yeley, Josh Bilicki, and Austin Cindric. Since Yeley, Bilicki, and Cindric cannot beat Green’s 19 bottom-five finishes, Green has secured his record seventh LASTCAR XFINITY Series Championship, his second in a row, and third in four years.

Green rejoined his RSS Racing teammates J.J. Yeley and Ryan Sieg at Indianapolis, where persistent rain kept the entire field off the track for two entire days. Without any practice or qualifying, Green secured the 33rd starting spot by virtue of his Past Champions Provisional. That provisional ranked Green behind 30 teams on 2018 Owner Points, the #12 Penske Racing entry with Darlington last-placer Austin Cindric, and Kaulig Racing’s new second team driven by Michigan winner Austin Dillon.

Trailing the final seven spots ranked by 2018 Owner Attempts was 40th-place Morgan Shepherd. Shepherd earned the spot by attempting 23 of the first 24 races this year, sending home Timmy Hill, whose #13 Motorsports Business Management had only attempted 8. Joining Shepherd at the back of the pack were Chad Finchum, whose #40 Smithbilt Homes Toyota dropped from 36th to the back for unapproved adjustments, and 25th-place Josh Williams, who came in for a pit stop before the start, dropping his #90 Sleep Well Chevrolet to the back.

During the pace laps, over the radio, 23rd-place starter Garrett Smithley in the #0 FAME-USA.com Chevrolet was told by his crew to fall to the rear out of concern of an early crash. Smithley’s JD Motorsports teammates Vinnie Miller in the #01 and B.J. McLeod in the #15 did the same, Miller dropping from 30th to 37th and McLeod from 28th to 35th by the start. Green followed suit, dropping one spot from 33rd to 34th.

Despite all these changes, when the race began, the bottom three positions stayed the same with Shepherd holding down last, 6.029 seconds back of the lead. He followed 39th-place Bayley Currey, once again swapped into JP Motorsports’ #55 Prevagen Toyota and Mike Harmon in the #74 Shadow Warriors Project Chevrolet. Shepherd remained last at the end of the first lap, losing another five seconds to the leaders. Currey took it briefly after the second lap, moments before 26th-place starter Caesar Bacarella made an unscheduled stop in the #8 MAXIM / Alpha Prime Chevrolet.

Bacarella returned to action two laps down, and lost a third when the competition caution fell on Lap 10. By that point, Green had pulled into the garage, and was three laps down in the 39th spot. On Lap 11, Green took the last spot from Bacarella, securing the spot and the championship. Yeley, Green’s closest title contender, stayed out to lead Lap 12 under caution before he pitted.

JP Motorsports took the next two spots in the Bottom Five. Currey took 39th, six laps after Green, with Josh Bilicki exiting in the #45 Prevagen Toyota five laps after his teammates. 37th went to Brandon Hightower, whose #66 OCR Gaz Bar Dodge suffered heavy right-front damage after he spun off the second corner. Hightower returned to the track, but when the splitter continued to drag on his car, the team called him to the garage, done for the day. Rounding out the Bottom Five was Spencer Boyd, whose #76 Grunt Style Chevrolet lost a lap before the competition caution, then destroyed the nose of his car in the wet grass while trying to avoid a Turn 3 tangle between Ty Dillon and Elliott Sadler.

After starting last, Morgan Shepherd enjoyed a fine run through the first 34 laps, staying on the lead lap and working his way up as high as 17th. Shepherd, who as LASTCAR reader Walt Reed pointed out never finished off the lead lap in four Brickyard 400s including a race-best 5th in 1996, ended up exiting after Stage 1. Despite this, Shepherd finished 32nd, his best finish in the XFINITY event at Indianapolis.

LASTCAR STATISTICS
*This marked Green’s fourth last-place finish in this event and his second in a row in the RSS Racing #93. His previous three last-place runs occurred in 2013, 2015, and 2017. 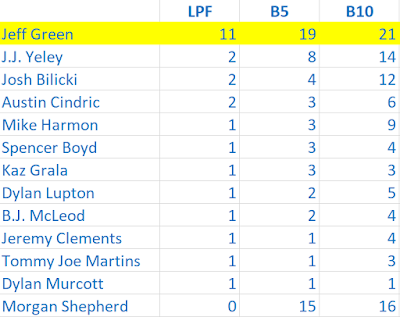