Austin Cindric picked up the 2nd last-place finish of his NASCAR XFINITY Series career in Saturday’s VFW Sport Clips Help A Hero 200 at the Darlington Raceway when his #60 Ford Hall of Fans Ford was involved in a single-car accident after he completed just 2 of the 147 laps.

Darlington marked Cindric’s last start in the #60 from Roush-Fenway Racing, a car he’s shared this year with fellow development drivers Chase Briscoe and Ty Majeski. His debut in the car was rough, a last-place run in this year’s Daytona opener after an early crash. In the 22 races since, Cindric has run every race, filling out his schedule driving for Penske Racing. In that time, he’s earned three Top Fives and seven Top Tens with a career-best runner-up finish to Justin Allgaier at Mid-Ohio. None of those finishes came in the #60, a car which has been involved in more than its fair share of accidents this season with all three of its drivers. Cindric’s best finish in the car was a 13th at Watkins Glen.

Cindric and the #60 team looked for a turnaround as they participated in Darlington’s “Throwback Weekend.” With sponsorship from the Ford Hall of Fans, the Roush-Fenway team paid homage to the paint scheme run on Ford’s first front-engine Mustang GTP which made its debut in an IMSA race at Road America, scene of last week’s XFINITY race, in 1983. “Back in the 80’s Ford made an American racing manufacturers first foray in sports car racing with a pretty unique car and program,” said Cindric in Roush-Fenway’s press release, “Pretty similar to what we are doing this year. We have a unique car and driver lineup and a unique program. The paint scheme on this car is really cool and has a bit of Ford history to go with our Ford paint scheme.”

At Darlington, Cindric was among the 41 cars on the preliminary entry list for Saturday’s race, but the list shrank by one when Mario Gosselin’s DGM Racing pulled their second entry, the #92 Chevrolet to be driven by Josh Williams, on Friday morning. Cindric ran 20th in opening practice and 16th in Happy Hour. In qualifying, he ran 11th in Round 1, improved to 9th in Round 2, then didn’t turn a lap in Round 3, picking up a “Darlington Stripe” on the right-rear along the way. Since both he and Ty Dillon didn’t put up a time in Round 3, Cindric would line up 11th with Dillon 12th.

Starting 40th was Josh Bilicki in the #45 Prevagen Toyota for JP Motorsports. Bilicki and 39th-place starter Brandon Jones in the #19 Hope For The Warriors Toyota were the only drivers who didn’t turn a lap in Round 1 of qualifying, and both incurred redundant tail-end penalties – Bilicki because of an engine change and Jones because he failed pre-qualifying inspection four times.

Also sent to the rear were Vinnie Miller, sent to a backup car after an incident in JD Motorsports’ #0 Flex Glue Chevrolet, and Chase Elliott, who broke loose in Turn 4 and called off his qualifying lap, forcing the team to change the rear tires. Curiously, the clock for Elliott’s #23 GMS Fabrication Chevrolet ended up counting more than 14 minutes – not seconds – yielding a lap averaging just under 6mph.

As Green and Long negotiated Turns 3 and 4, 39th-place Brandon Jones pulled down pit road. As yet another penalty for his inspection infraction, Jones had to make a green-flag pass-through penalty. Jones returned to the track in the last spot and one lap down. A year earlier, the #19 finished in this same race with Matt Tifft wrecking off the fourth corner. Ironically, Jones’ salvation would see history repeat itself.

As the field negotiated Turn 4 to complete Lap 2, Cindric was running the high lane as Ryan Truex closed from behind. At corner exit, the right-front of Truex’s #11 Leaf Filter Chevrolet made contact with the left-rear of Cindric’s Ford, sending the #60 sliding head-on into the inside wall. The car made heavy contact with the right-front and right-rear, sending the car spinning to a stop across the start / finish line. Spencer Boyd, who started 31st in the #76 Grunt Style Chevrolet, received right-front damage in the incident, and B.J. McLeod narrowly avoided the #60 as he cut his #15 Flex Tape Chevrolet to the low side on the frontstretch.

Cindric was uninjured, but visibly upset from the on-board camera. Checked and released from the infield care center, he gave an emotional interview. “Just to be not able to experience this race, and my last race with this team, it really bothers me.” Cindric will close out the 2018 season with both Penske Racing and Stewart-Haas Racing with Biagi DenBeste. With two races until the start of the Playoffs, he stands 11th in the standings, 60 points ahead of 13th-place Michael Annett.

Jeff Green secured the 39th finishing position, pulling off the track after the race restarted following Cindric’s accident. Green can lock-up his seventh LASTCAR XFINITY Series championship next Saturday in Indianapolis if teammate J.J. Yeley does not finish last.

During the ensuing 37-lap green-flag run, engine problems sent both Spencer Boyd’s damaged #76 and Chad Finchum in the #40 MBM Motorsports / TLC Resorts Chevrolet behind the wall – Boyd after completing 19 laps and Finchum after turning 24. The two held 38th and 37th but ultimately returned to the track by the end of Stage 2 to finish 31st and 32nd. Finchum handed over the wheel to Timmy Hill, whose Benny Parsons throwback on MBM’s #72 CrashClaimsR.Us Toyota exited after 54 laps with a vibration.

The return of both Boyd and Finchum changed the complexion of the Bottom Five. The 38th spot fell to Morgan Shepherd, who ran 24 laps before handling woes stopped his #89 Visone RV Chevrolet. He dropped from 36th to 38th by the checkered flag. Vinnie Miller’s backup car turned 32 laps before suspension issues put him 37th, followed by an engine failure that sent Jimmy Means’ #52 Steely Lumber Chevrolet to the garage.

LASTCAR STATISTICS
*This marked the first XFINITY Series last-place finish for car #60 at Darlington since May 9, 2008, when Carl Edwards’ Scotts Water Smart Ford won the pole, then crashed out after 3 laps of the Diamond Hill Plywood 200. As you may recall, this was the most recent last-place run for that number in this series before Cindric’s crash at Daytona. Edwards’ last-place run was the first for the #60 in this event since August 31, 1985, when Ed Berrier’s #60 Horton Distributing Pontiac crashed after 4 laps of the Pontiac Winners Circle 200. 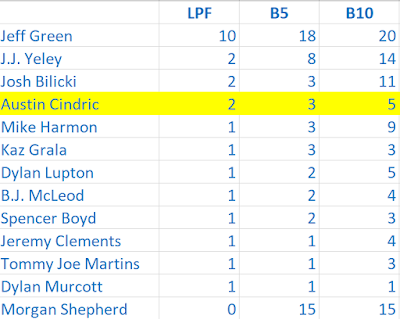