Tanner Thorson picked up the 1st last-place finish of his NASCAR Camping World Truck Series career in Friday’s World of Westgate 200 at the Las Vegas Motor Speedway when his #20 Go Share Chevrolet was involved in a single-truck accident after he completed 2 of the race’s 144 laps. The finish occurred in Thorson’s 6th series start.

The 22-year-old driver from Minden, Nevada (which is closer to Reno than to Las Vegas), has already been racing for 18 years. He moved from outlaw karts to national midget racing, earning Rookie of the Year honors in the latter in 2013. 2016 was his biggest year yet. That season, he claimed the USAC National Midget Championship, the Top Gun award, and his second of three consecutive National Midget Driver of the Year awards. He also made his ARCA Racing Series debut at the Illinois State Fairgrounds track, finishing 12th for Venturini Motorsports, and finished 3rd and 5th in a pair of CARS Super Late Model Tour races with David Gilliland.

This year, Thorson has made the jump to NASCAR, sharing a ride in Randy Young’s #20 Chevrolet with Scott Lagasse, Jr., Austin Dillon, Michel Disdier, Ried Wilson, Bubba Wallace, Daniel Hemric, Tyler Young, Tate Fogleman, and Max Tullman. Las Vegas would mark Thorson’s fifth start in 18 races this year, a schedule that began with a 16th-place run at Dover. He improved with a 13th-place run at Iowa, and through his most recent start at Bristol had yet to finish worse than a 19th at Eldora. Go Share, which backed Thorson at Dover and Iowa, would return as sponsor.

Thorson was one of 38 drivers entered for the 32-truck field, an impressive list that dwindled gradually through the week. By Wednesday, Beaver Motorsports had withdrawn the #50 VIPRacingExperience.com Chevrolet for 2003 series champion Travis Kvapil, and Mike Harmon had pulled his own #74 Chevrolet. Then, by Friday, Jennifer Jo Cobb Racing pulled their second truck, the #0 Driven2Honor.org Chevrolet to be raced by Camden Murphy. Cobb herself impressed in qualifying with a 27th-place run in the #10 Waldo’s Painting Company Chevrolet, her best since she started 27th in this same race last year.

Three drivers missed the show after qualifying. Norm Benning turned the slowest lap overall in the #6 H&H Transport Chevrolet. The second was J.J. Yeley, who was swapped in for team owner Josh Reaume in the #33, which itself was switched from a Chevrolet to a Toyota. The fastest truck to miss was the third Young’s Motorsports truck with Tate Fogleman and the #12 Solid Rock Carriers Chevrolet.

Thorson ran 22nd in the opening practice, jumped to 13th in Happy Hour, then did even better in qualifying, turning the 11th-fastest lap in Round 1 and matching it in Round 2 with a speed of 174.933mph (30.869 seconds), equaling his season-best start at Pocono. Austin Hill, driving the only other Randy Young truck in the field, qualified 16th.

Starting 32nd and last was popular driver Jordan Anderson, whose #3 Commercial Property Services Chevrolet turned the second-slowest lap in time trials, but made it in on Owner Points. He was joined at the back by two drivers sent to the rear for unapproved adjustments: Playoff contenders Ben Rhodes in the #41 The Carolina Nut Co. Ford and ThorSport Racing teammate Matt Crafton in the #88 Ideal Door / Menards Ford. While Rhodes had qualified a solid 18th, Crafton, who leased a Roush-Yates Racing motor, had to fall back on Owner Points in 29th.

With one lap to green, Jennifer Jo Cobb surrendered her 27th starting spot and fell to the rear along with Joe Nemechek, lined up 22nd in the #87 Harrah’s Chevrolet. Nemechek held last at the start with Cobb in 31st. Both were still running in those spots, Nemechek 6.8 seconds back of the lead, when the last-place battle ended abruptly.

Coming to the end of Lap 2, Thorson was in a tight battle running the high lane in Turns 3 and 4. While running on the outside of Myatt Snider’s #13 Century Container Ford. In the exchange, Thorson’s #20 slid up the track and bashed the outside wall in Turn 4. Thorson kept rolling, but more and more smoke poured from the right side of his machine, forcing him to pull to a stop on the apron of Turns 3 and 4. Fire rolled out from behind the right-front wheel as he climbed from the truck, done for the night. A long caution period was needed to clean up fluid that trailed to where the truck stopped.

Thorson then turned his attention back to dirt, where he was running the Calistoga Speedway’s season finale in California. On Saturday, Thorson had driven his way to the transfer spot in his Last Chance Qualifier when, on the final lap, his car started blowing smoke in Turn 1. He was passed entering the backstretch, eliminating his white #3C from the main.

For more on Tanner Thorson, check out his website here.

Finishing 31st was Joe Nemechek in the #87 Harrah’s Chevrolet. Nemechek qualified 22nd in his second NEMCO Motorsports entry and pulled off the track to reprise his role helping his son John Hunter on pit lane. The rest of the Bottom Five was filled by the multiple accidents that slowed the night’s frantic action. 30th went to Bo LeMastus in the second DGR-Crosley truck, his #17 Crosley Brands Toyota out when he wrecked in Turn 3 on Lap 46, followed by 29th-place Riley Herbst in Kyle Busch Motorsports’ #46 Advance Auto Parts Toyota and Wendell Chavous, swapped at the last minute from Premium Motorsports’ #15 back to his familiar #49 Sobriety Nation Chevrolet. Ross Chastain, swapped into the unsponsored #15 in Chavous’ place, finished a strong 7th, his best finish since he ran 7th at Martinsville last year for Bolen Motorsports.

There were other surprising runs by underdog drivers and teams.

Austin Theriault drove at Las Vegas for the first time since injuring his back in a serious crash here in 2015. Driving for On Point Motorsports, which finished next-to-last in its series debut at Bristol, Theriault made his first Truck Series start in nearly two years count, finishing 8th.

Austin Wayne Self finished a season-best 9th, his first top-ten run of the year and first since joining Al Niece’s operation. It’s his best finish since last year at Mosport, where he ran 9th for his family’s AM Racing team.

After her strong qualifying run, and despite falling to the rear for the start, Jennifer Jo Cobb finished 12th. It’s not only her best finish of the season, but the second-best of her career, trailing only a 6th-place run in the 2011 opener at Daytona. According to David PeQueen, this finish came at a perfect time, as it vaulted her #10 team ahead of two teams in Owner Points – the #33 of Reaume Brothers Racing and Norm Benning’s #6 – which both failed to qualify.

Korbin Forrister tied the second-best finish of his career earned with the All Out Motorsports team earlier this year at Kentucky with a 13th-place showing. His career-best in the series remains a 12th in the 2015 Daytona opener, when he was driving for Christopher Long.

Finally, just weeks after missing their first race of the year by not entering the race in Mosport, D.J. Copp’s team returned to action with Bayley Currey running double-duty with the XFINITY Series. Currey brought the unsponsored #83 home in the 16th spot. It’s Currey’s best finish in the series this year, and the team’s third-best behind Nick Hoffman’s 10th-place run in Eldora and Scott Stenzel’s 15th-place showing in Daytona.

LASTCAR STATISTICS
*This marked the first last-place finish for the #20 in a Truck Series race since July 7, 2011, when Johanna Long’s #20 Panhandle Grading & Paving Toyota crashed after 5 laps of the UNOH 225 at Kentucky. Long also had the only previous last-place run for the number at Las Vegas, when the transmission let go on the opening lap on September 25, 2010.
*This was the first last-place run for Young’s Motorsports since August 2, 2014, when team owner Randy Young fielded a truck for Mike Mittler’s #63 MB Motorsports team with Justin Jennings behind the wheel. Jennings pulled in after 2 laps of the Pocono Mountains 150.
*Thorson’s 11th-place starting spot makes him the highest-qualified last-placer in the series since July 19, 2017, when Caleb Holman started 9th at Eldora before transmission issues. 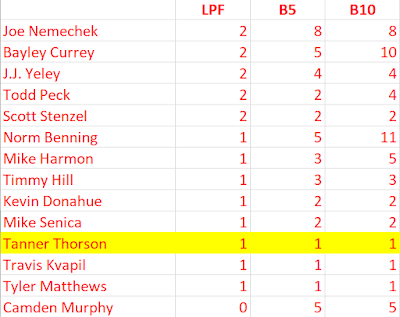