Hollis Shane Thackeray is not quite your typical NASCAR prospect. The 17-year-old hails from Gridley, California, north of San Francisco, and the one common thread throughout his racing career has been the number 38. From midgets to sprint cars to late models, Thackeray has used the number 38. He was also previously associated with GoShare, which has backed Tomy Drissi’s efforts in sports cars as well as Tanner Thorson’s in the truck series. When that association ended this year, he has since run two races in the #38 for his own family.

Twenty-six cars showed up on the entry list for this event. Per the norm, with this many entries, some withdrew. NextGen Motorsports withdrew one of their cars and Obaika Racing withdrew after a different team failed to follow through on their commitment of prepping a race-ready car. Bill McAnally Racing entered five cars, three for its series regulars and entries for NASCAR XFINITY drivers Christopher Bell and Brendan Gaughan. Sheldon Creed entered a car with Norman Levin Racing, and Vanessa Robinson and Cole Keatts returned with Jefferson Pitts Racing. A slew of drivers made debuts, including Buddy Shepherd, Tim Ward, David Hibbard and Michael Kofoid.

The weekend was quite the sight to behold. The spectacle of cars on dirt did not disappoint for most fans. Hailie Deegan was pegged as one of the favorites going into it and held up to the standard, claiming fast time in practice over Derek Kraus. She claimed the tops spot in time trials as well and won her heat race, claiming the official pole position. At the opposite end of the field was Hibbard, shotgun on the field for his NASCAR debut.

On the start was when everything broke loose. A cloud of dust settled over the back half the field, limiting visibility severely. As Kyle Larson said, it seemed as if those working at the track forgot that water trucks existed. Another attempt was foolishly made on lap six, which resulted in Thackeray, Kody Vanderwal and Shepherd getting tangled in turn one. Thackeray and Shepherd retired on the spot, while Vanderwal was able to repair his car and continued on to complete 59 laps. Both were awarded $1,100 for their efforts and called it a weekend. 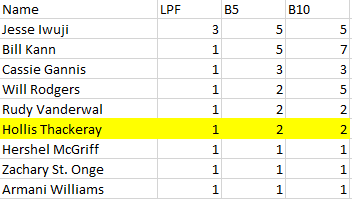