Mexico City, Mexico-born Ruben Garcia Jr. has been around the block more than one would expect from a 22-year-old. He is a seven-year veteran of the NASCAR Mexico Series and won the championship in 2015 on the day after his 20th birthday. He also currently leads the point standings in that series after seven races. The year before that, Garcia became the youngest Mexican-born driver to start a NASCAR national series race, making three little-publicized starts in 2014: his debut for Rick Ware Racing, and two later starts for SR2 Motorsports. Starting in 2016, Garcia has run for Rev Racing in the NASCAR K&N Pro Series, winning his first race earlier this year at Memphis.
The Apple Barrel 125 was run as part of a New Hampshire tripleheader with the Whelen Modified Musket 250 and the Pinty’s Series Visit New Hampshire 100.

Perhaps because of that, or perhaps not, the entry list for the K&N Pro race was a solid 20 cars strong. Three cars wound up withdrawing: NextGen Motorsports (remember when they were going to run Xfinity and Trucks this year?) scaled back their efforts from three to two cars, Ernie Francis Jr. was unable to make a ride work with Rev Racing, and Bill Hoff had yet another weekend when his #71 machine was unable to compete. On the flip side, some teams expanded their efforts. DGR-Crosley entered four cars, two for regular drivers Tyler Ankrum and Tyler Dippel and two part-time cars: the #1 for Derek Kraus, and the #98 for Riley Herbst. MDM Motorsports ran a second car for Sam Mayer, and NextGen Motorsports fielded two entries: one for regular driver Juan Manuel Gonzalez and one for Frenchman Thomas Ferrando, making his East debut.

First practice was, well, an East practice. Chase Cabre, who up to this point had not shown a lot of speed this year, led the session, with Gonzalez anchoring the field nearly a second and a half behind.

Second practice was even more strung out, with Gonzalez trailing Derek Kraus by 1.6 seconds. The 25 car also qualified last, losing more than 1.9 seconds to Kraus on his qualifying lap.

Garcia started eighth but had worked his way up to sixth by Lap 22, when the team noted a low tire and expressed the need to pit. That opportunity never came, as on lap 24 Garcia spun in to the wall. His car was towed behind the wall for repairs and came back out on track later, out of contention for the rest of the race.

Thomas Ferrando was the only car that failed to finish, his #25 tagging the wall five laps short of the scheduled distance. Gonzalez finished four laps down under power, Ryan Vargas was the only car a lap down and Tyler Ankrum was the last car on the lead lap after having a late incident with his DGR-Crosley teammate Tyler Dippel. 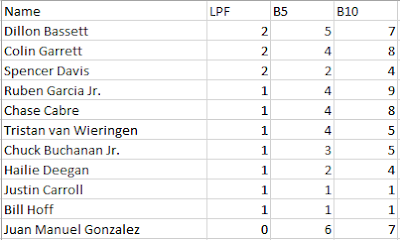