Martin Truex, Jr. picked up the 8th last-place finish of his Monster Energy NASCAR Cup Series career in Monday’s 25th Annual Big Machine Vodka 400 at the Brickyard at the Indianapolis Motor Speedway when his #78 Auto-Owners Insurance Toyota fell out with brake problems after 41 of 160 laps.

Up until Tuesday morning, Truex and the Furniture Row Racing team were firmly on the way toward defending their Cup Series Championship. Since the last-place run at Texas, the 78 team took the checkers three more times at Pocono, Sonoma, and Kentucky for a season total of four. While Truex hasn’t been as dominant when it comes to Stage victories, he’s remained so consistent that each and every one of their 15 top-ten finishes were runs of 5th or better. They left Darlington with a firm grasp on 3rd in the Playoff rankings.

But it was Tuesday when news broke that Furniture Row Racing would shut down at the end of the 2018 season, citing a puzzling lack of sponsorship. The team now faced an uncertain future at perhaps the worst possible time – heading to Indianapolis for the final race of NASCAR’s “regular season.” And things didn’t go much better once they arrived. The crumbling remnants of a tropical storm dumped more than five inches of rain, cancelling all track activities from Friday through Sunday. While Truex’s rank in points secured him 3rd on the grid, neither he nor the other 39 starters knew what their cars would do. He did know that his car had failed inspection three times, forcing him to surrender that 3rd spot, along with Daniel Suarez, whose #19 Stanley Toyota failed four times, handing the Gibbs effort a 10-point penalty. Once in the back running pace laps Monday morning, Truex also expressed concern over his brakes, which he described as “spongy.”

Lined up 40th on the grid was B.J. McLeod, one of eight drivers who lined-up at Indy after running the postponed XFINITY Series race that morning. McLeod, who finished the last car on the lead lap in 16th for JD Motorsports, was entered in Rick Ware Racing’s second car, the #52 Jacob Companies Ford. McLeod scored the spot as the lowest-ranked of the four entered “Open” teams, an effort helped after StarCom Racing withdrew the 41st entry – their second car, the #99, which was to be driven by Bristol last-placer Gray Gaulding. Landon Cassill, in StarCom’s Chartered #00 Chevrolet, was sent to the back along with Truex and Suarez for unapproved adjustments.

The tail-end of the field changed several more times during the pace laps. At the end of the parade lap, Reed Sorenson pulled behind McLeod in Premium Motorsports’ #7 Chevrolet along with Jeffrey Earnhardt in the Gaunt Brothers’ #96 iK9 / Xtreme Concepts Inc. Toyota and XFINITY regular David Starr, making his first Cup start of 2018 in the primary Rick Ware entry, the #51 Jacob Companies Chevrolet. Starr was to start 36th, last of the Chartered teams.

Also making his first Cup start of the year was Regan Smith, a last-minute substitute for Kasey Kahne, who suffered extreme heat exhaustion at Darlington. Smith joined the tail-end crew when he pulled the #95 WRL General Contractors Chevrolet down pit road to get a feel for it. Smith pulled up as McLeod once again drew back on the final pace lap, joining his teammate Starr.

Moments before the start, yet another last-place contender entered the battle. Ross Chastain, who was also pulling double-duty, slowed up from the 32nd spot in his #15 Low T Centers Chevrolet. Chastain slowed up so much that McLeod had to just about stop behind him off Turn 2, then drive back around him. The #15 picked up speed again back down the straightaway, where he followed a ragged group that was no longer in two-by-two formation. This put Chastain in the 40th spot at the green.

By the end of Lap 1, Chastain caught and passed Timmy Hill, whose #66 Toyota from Motorsports Business Management carried a new blue paint scheme with sponsorship from Ternio. Chastain cleared Hill at the stripe, and the #66 slowly lost touch with the pack. By the seventh circuit, Hill was within sight of the leaders, who passed him on the way to Turn 3 on Lap 9. Hill earned the Lucky Dog when the first competition caution fell the next time by, at which point the crew asked Hill if the car was losing power.

Under the yellow, Chris Buescher took 40th for a moment when he made an extended stay on pit road after his #37 Bush’s Beans Chevrolet suffered right-front fender damage. Sorenson, Starr, and Hill fell behind Buescher by the Lap 14 restart, putting Hill back in the 40th spot. By Lap 25, Hill had again been caught by the leaders, and he moved up high in Turn 1 to let them go by on the short chute. When the next competition yellow fell on Lap 30, Hill again struggled with power. This time, it occurred on Lap 32, when the car shut down on the apron between Turns 3 and 4. He managed to restart, cutting off the access road, and made one more pit stop prior to the restart without losing another lap. He was still running in last, the only car one lap down, when the last-place battle suddenly ended on Lap 41.

Truex had been working his way through the pack when, entering Turn 1, his left-front brakes failed, dropping the brake shoes on the track and ripping up the left-front corner of the hood. Despite occurring at the “2” brake marker heading into the first corner, Truex managed to keep the car under control and steered to the apron, at which point billows of white smoke were pouring from the right-front wheel. Truex limped his car back to pit road, then made the hard left turn into the garage. After the crew looked over the car in the garage, it was steered back to the hauler, done for the afternoon.

As Jeff Gluck pointed out, Truex couldn’t leave the track until after the end of the race, as he had post-race media obligations as one of the 16 Playoff drivers.

The next three spots in the Bottom Five were filled by accidents. For the second time in less than two months, 38th-place Bubba Wallace experienced a catastrophic brake failure that forced him to yank the wheel to the left at the end of a long straightaway. Unlike at Pocono, Wallace managed to avoid hitting the wall and appeared to have spun to safety – that is, until David Starr’s #51 arrived on the scene and slammed into Wallace’s left-rear corner. Both Wallace and Starr were done for the day with Starr taking 39th.

The 37th spot fell to A.J. Allmendinger, who lost control in the second corner and caught Playoff contender Alex Bowman in the outside wall. While Bowman managed to barely clear the Crash Clock, ultimately securing the final Playoff spot, Allmendinger slid head-on into the inside wall, ending his day in the #47 Kroger ClickList Chevrolet. Rounding out the group was Matt DiBenedetto, whose first of several extended stays on pit road and in the garage came during the Wallace-Starr accident. He returned from the garage on Lap 114 and again on Lap 127, but what ultimately was a rear end failure caused the team to pull out of the race in the final laps.

LASTCAR STATISTICS
*This marked the first Cup Series last-place finish at Indianapolis for both Truex and the #78.
*Truex’s 3rd-place starting spot – though earned by the rule book – makes him the highest-qualified Cup driver to finish last in 2018. A driver hadn’t started that close to the front and finished last in Cup since last fall at Phoenix, where Kyle Larson also started 3rd before engine trouble.
*This marked the first time a Cup Series driver finished last with brake trouble as the listed cause since November 9, 2014, when Mike Bliss' #37 Tommy Baldwin Racing Chevrolet exited after 16 laps at Phoenix. It's the first time it was the listed cause of a last-place run at Indianapolis since July 26, 2009, when Joe Nemechek's #87 NEMCO Motorsports Toyota exited after 21 laps. 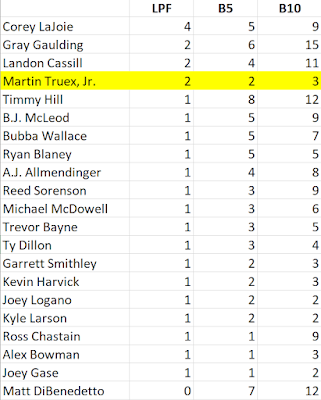