J.J. Yeley picked up the 5th last-place finish of his NASCAR XFINITY Series career in Friday’s Food City 300 at the Bristol Motor Speedway when his unsponsored #93 RSS Racing Chevrolet fell out with brake trouble after 9 of 310 laps.

The finish, which came in Yeley’s 304th series start, was his second of the season and first since Iowa, eight races ago. In the XFINITY Series last-place rankings, it was the 38th for car #93, the 55th for brake issues, and the 509th for Chevrolet. Across NASCAR’s top three series, it was the 88th for the #93, the 154th from brake trouble, and the 1,620th for Chevrolet.

With the finish, Yeley takes the second spot in the 2018 LASTCAR XFINITY Series championship from Josh Bilicki. However, Yeley would need to finish last in eight of the remaining eleven races - and have Jeff Green not finish last again - to take the title.

Yeley was originally scheduled to be one of three drivers to attempt all three races at Bristol last weekend, joining Ross Chastain and B.J. McLeod. That effort ended earlier in the week when Yeley’s Truck Series ride in Mike Mittler’s #63 Chevrolet was withdrawn along with Jennifer Jo Cobb’s #0 Driven2Honor.org Chevrolet, to be driven by Camden Murphy, and the driverless #12 from Young’s Motorsports. Instead, Yeley would run Saturday’s Cup race for Premium Motorsports in an inverted paint scheme on his black-and-white #7 Steakhouse Elite Chevrolet. Before that, he would continue his XFINITY Series effort with RSS Racing.

At RSS, Yeley swapped rides with teammate Jeff Green, taking the controls of the “start-and-park” #93. Green, with returning sponsorship from C2 Freight Resources, would take over the #38 and attempt the full race, joining Ryan Sieg in the flagship #39 Cook’s Comfort Systems Chevrolet. While without sponsorship, Yeley’s #93 would feature red accents on the sides in place of the all-black scheme run for the last several weeks. It resembled the scheme run on the #93 earlier this season but for the glossy black base coat in place of a dark grey pattern.

Yeley started the weekend 34th of 36 drivers in the opening practice and improved to 29th of 40 in Happy Hour. With exactly 40 drivers entered for as many spots, every driver who practiced would start the race. Yeley secured 33rd on the grid – slowest of the drivers who didn’t need to fall back on Owner Points – with a lap of 115.271mph (16.646 seconds).

Starting last on Friday was owner-driver Morgan Shepherd, whose #89 Visone RV Chevrolet ran the slowest lap overall of 109.897mph (17.460 seconds), nearly four-tenths slower than 39th-place Stephen Leicht in the Mike Harmon #74 Chevrolet and 2.1 seconds off Kyle Busch’s pole lap. Prior to the start, Yeley joined Shepherd at the rear, having missed the driver’s meeting, perhaps due to Cup qualifying, which was run just before the event. Green, who timed in 29th, also joined Yeley, the #38 team having changed tires after qualifying. Also sent back were 22nd-place Michael Annett (#5 Pilot / Flying J Chevrolet) and 37th-place Josh Bilicki (#45 Prevagen Toyota) for unapproved adjustments.

Shepherd was shuffled back to last by Lap 5, and was the first to lose a lap on Lap 9. That time by, Yeley ducked down pit road and into the garage, and Shepherd followed him in. Since the garage entrance was short of the starting line, both Shepherd and Yeley were credited with 8 completed laps. Shepherd, by virtue of running last at the time, held 40th with Yeley 39th. But on Lap 12, Shepherd returned to the track and turned three more laps, dropping Yeley to last on Lap 13. Only then did Shepherd re-enter the garage for a second time, retiring in 39th with a vibration. In the process, Yeley was credited with one more completed lap for a total of 9.

The 38th spot went to Timmy Hill in the #13 Smithbilt Homes Toyota. Like Shepherd, Hill made an early trip to pit road on Lap 16, then rejoined the action multiple laps down, completing a total of 22 circuits before calling it a night. Hill’s teammate Chad Finchum held 37th for much of Stage 1 after a brake line issue sent him behind the wall in the #40 Smithbilt Homes / The Preserve Toyota. Finchum returned to action 60 laps in arrears and ultimately crashed out, leaving him 30th. Finchum’s rise dropped to 36th spot polesitter Kyle Busch, who led 69 of the opening 74 laps before a blown tire sent him into the wall and out of the race.

Yeley’s weekend continued into Saturday, where he qualified 34th. And while he made it within 100 laps of the finish, it ended with a hard crash. On Lap 432, after contact between Kyle Busch and Martin Truex, Jr. sent Truex spinning into the inside wall, the #78 came back up the track into Yeley's path. The two made contact, destroying the left-rear of Yeley's car and sending him spinning backward into the outside wall. While Yeley had difficulty extricating himself, he climbed out under his own power.

LASTCAR STATISTICS
*While this was Yeley's first XFINITY last-place finish at Bristol, it was the second in four Bristol races for RSS Racing's #93, joining Jordan Anderson's run in the spring race last year. 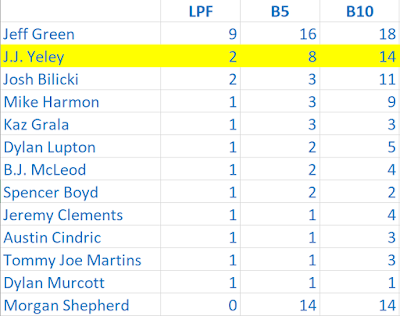