XFINITY: Jeff Green’s #93 has a new look, but same result at Road America

Special thanks to LASTCAR.info Guest Contributor William Soquet for his trackside contributions at Road America used in this week's feature.

Jeff Green picked up the 112th last-place finish of his NASCAR XFINITY Series career in Saturday’s Johnsonville 180 at Road America when his unsponsored #93 RSS Racing Chevrolet fell out with suspension problems after 2 of 45 laps.

The finish, which occurred in Green’s 503rd series start, was his series-leading tenth of the season and his first since Loudon, five races ago. In the XFINITY Series last-place rankings, it’s the 39th for car #93, the 13th for suspension problems, and the 510th for Chevrolet. Across NASCAR’s top three series, it’s the 89th for the #93, the 36th for suspension issues, and the 1,622nd for Chevrolet.

It’s now down to a two-car battle for the 2018 LASTCAR XFINITY Series Championship, though the outcome has been all but settled. J.J. Yeley needs to finish last in the next nine of the remaining ten races to take the season lead from Green. Thus, if Yeley fails to finish last in the next two rounds at Darlington and Indianapolis, Green will secure his seventh LASTCAR XFINITY Series championship, no matter where he finishes.

Since his most recent last-place run at Loudon, Green has continued to split time between his #93, reserved for “start-and-park” duty, and the #38, which has most often attempted full-race runs for teammate J.J. Yeley. Green attempted the full race at Iowa, but suffered an ignition problem at the halfway point, leaving him 35th. Green showed promise last week in Bristol, qualifying 29th with returning sponsorship from C2 Freight Resources, but was hampered by body damage, causing the car to overheat in the final laps. Ultimately, a fuel pump was blamed for a 26th-place finish.

At Road America, Green was back in the #93, which carried a different paint scheme for the first time in 2018. The car ran a black, white, and red scheme that seemed to resemble one of teammate Yeley’s Superior Essex paint schemes. Yeley was himself absent from Saturday’s race, swapped out for Brian Henderson. Henderson’s #38 was reportedly the same Friends of Jaclyn Foundation Chevrolet that the road racer ran for DGM Racing at Watkins Glen. Ryan Sieg remained in the team’s primary #39 Chevrolet with returning sponsorship of his own from Lombard Bros. Gaming.

Green did not join Tyler Reddick and a suddenly sponsorless Conor Daly on track during the rainy first practice session, and was the only driver to fail to complete a lap in Happy Hour. Still, thanks to his Past Champions Provisional and the withdrawal earlier in the week of Brandon Brown’s #86 Chevrolet, Green would start along with the remaining 39 entrants. Green ended up 35th in qualifying with a lap of 103.563mph (2:20.715), second-fastest of those locked-in by Owner Points.

Starting last on Saturday was Carl Long. William Soquet, on assignment for LASTCAR.info at the track, reported that Long and his Motorsports Business Management teammate Chad Finchum (#40) acquired associate sponsorship from Allstate Insurance of Kimberly, Wisconsin, which appeared on both cars’ quarter-panels. Long was also one of three drivers who changed tires before the race, joining Kaz Grala (#61 IT Coalition Ford, returning from an off-week at Bristol), and 8th-place starter Austin Cindric (#22 Menards / Richmond Ford). Also sent to the rear was Garrett Smithley for unapproved adjustments on JD Motorsports’ #0 Flex Tape Chevrolet. Smithley and Grala recovered nicely, finishing 15th and 11th, respectively.

Green was a factor in the last-place battle from the start. As at Watkins Glen, he fell to the rear before the green flag and crossed the stripe in 39th. Long remained last, 6.921 seconds back of the leader, and fell 20.953 back by the end of the first circuit. Green took last from Long the next time around, and crossed the stripe 39.476 seconds back of the lead, a full 4.119 back of new 39th-place driver Vinnie Miller in the #01 JAS Trucking Chevrolet. As it turned out, Green pulled behind the wall as he crossed the stripe, as he never completed another circuit during the race.

Green locked-up the last spot just seconds before two other drivers found trouble. Brake troubles once again caught the #55 Prevagen Toyota from JP Motorsports. Similar to Dylan Murcott’s misadventure at Mid-Ohio, IMSA regular James French saw his own NASCAR debut take a detour when his car ran off the track and into the gravel in the first corner. At the same time, Long spun and stalled in Canada Corner, watching helplessly as the rest of the field rolled past to put him a lap down. Under the ensuing yellow for French’s incident, Long settled into 39th, completing 3 laps with French in 38th with four laps done.

With four laps complete, Green’s crew came on the radio and told the team to load the #93 on the hauler. However, both Long and French in 39th and 38th both returned to action. Long returned on Lap 10 and passed French for 38th the next time by. French, now one lap behind Long, followed him onto the track on Lap 11. Both drivers soon climbed past Ryan Reed, whose #16 Drive Down A1C / Lilly Diabetes Ford wrecked on a restart after he crossed the nose of Brandon Jones’ #19 Toyota Service Centers / Mobil 1 Toyota as the pair entered Turn 2, sending the #16 head-on into the outside wall. Reed settled into 39th with French taking 38th, turning two more laps than the #16 before his brake issue eliminated him.

Long managed to complete 32 of the race’s 45 laps before the engine let go, ultimately climbing out of the Bottom Five and into the 32nd spot. Rounding out the Bottom Five in his place were Austin Cindric, who parlayed pit strategy to take the lead for two laps, only to pull over while out front with smoke from the right-front wheel, signaling a sudden blown engine. Ahead of 37th-place Cindric was 36th-place David Starr, whose #52 Silver Springs House / Onyx Auto Finance Chevrolet lost oil pressure under the green, forcing the car to the garage with a blown motor. Interestingly, Starr’s crew employed one of team owner Jimmy Means’ old pit boards during the race.

LASTCAR STATISTICS
*This marked Green’s fifth last-place run in just nine XFINITY races at Road America, his second in a row at the track, and the third for car #93. 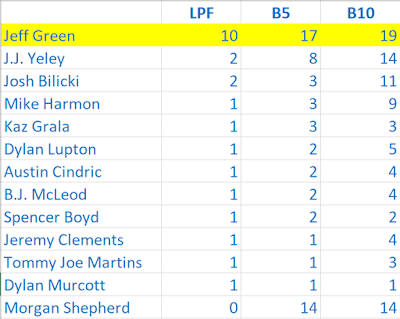