Dylan Murcott picked up the 1st last-place finish of his NASCAR XFINITY Series career in Saturday’s Rock ‘n Roll Tequila 170 at the Mid-Ohio Sports Car Course after his #55 Prevagen / Pets For Warriors Toyota was involved in a single-car accident on the opening circuit of the 75-lap race.

The 26-year-old from Ancram, New York came to Mid-Ohio having already earned two IMSA championships, including last year’s IMSA Continental Tire Series GS Championship. That same season, he claimed a victory in Dillon Machavern’s RS1 Porsche at Virginia International Raceway. On August 7, it was announced that Murcott would make his NASCAR debut at the Mid-Ohio course, where this past May he competed in the Lamborghini Super Trofeo Championship. That same circuit saw Kevin Conway, the NASCAR’s 2010 Cup Series Rookie of the Year, take the World Championship in 2014.

Murcott’s first NASCAR ride would be the second JP Motorsports Toyota, teammate to Josh Bilicki’s #45. The #55 had been driven for much of the year by Stephen Leicht and Brandon Hightower, but since Hightower parted ways with JP last month, has seen even more drivers run one-off starts. Bayley Currey made his series debut in the car at Loudon. Peter Shepherd III returned to the series after a 12-year absence to run Iowa. David Levine was scheduled to run Watkins Glen, but the team withdrew and left the car on the hauler. Murcott was tabbed for Mid-Ohio, where he likely drove the same car JP withdrew at The Glen.

Murcott’s weekend began with a seven-lap run in opening practice, where he ranked 34th of the 39 drivers to take time. He was not among the six drivers to take time in Happy Hour, then settled on 34th on the grid in qualifying with a lap of 90.827mph (1:29.498), the first driver locked-in on Owner Points.

Starting last was Morgan Shepherd, whose #89 Visone RV Chevrolet was back in action after withdrawing at Watkins Glen. Shepherd’s qualifying lap of 80.818 mph  (1:40.582) was more than six seconds off the next-slowest car and 16 seconds off the pole speed.

Prior to the start, Shepherd was joined at the rear by four drivers sent to the rear for unapproved adjustments: JD Motorsports teammates Garrett Smithley (#0 Wheeling Nailers Chevrolet) and Vinnie Miller (#01 JAS Trucking Chevrolet), plus Alex Labbe (#36 Larue Chevrolet) and Murcott’s teammate Josh Bilicki in the #45. Bilicki would rebound impressively, finishing 20th in the race - his new season-best.

In addition to the four penalized drivers, Stephen Leicht had fallen to 40th by the green flag. Leicht, the lone DNQ at The Glen, was making his second-straight attempt in Mike Harmon’s #74 Horizon Transport Dodge. With no teams sent home after time trials, Leicht was locked-in, but faced a 34.139 second gap back of the lead at the start, 29.360 seconds back of Shepherd.

As Leicht looked to close the gap, trouble broke out in front of him. At the time, Murcott’s #55 was running 34th when he drove off the course into the gravel trap known as “China Beach.” From what the driver later reported to be a brake failure, the car overshot Turn 4 and drove along the left side of the pit. Whether the car was out of control or simply traveling too fast, the result was the same – the #55 slammed head-on into the tire barriers. Fortunately, Murcott climbed out unhurt, but his day was done. The car also had noticeable damage around the left-rear wheel, but it was unclear what brought that about.

The garage filled gradually through the rest of Stage 1. Finishing 39th was Jeff Green in the #93 RSS Racing Chevrolet, citing brake issues after six laps. Shepherd wound up 38th with overheating. Leicht took 37th, two circuits after Shepherd. Three laps after Leicht, Vinne Miller rounded out the Bottom Five after only 14 laps.

LASTCAR STATISTICS
*This marked the first XFINITY Series last-place finish for car #55 since April 25, 2014, when Jimmy Weller III lost the engine on SS-Green Light Racing’s Chevrolet at Richmond. The number had never before trailed the XFINITY race at Mid-Ohio. 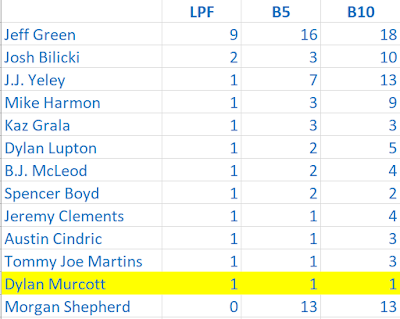