Timmy Hill picked up the 1st last-place finish of his NASCAR Camping World Truck Series career in Saturday’s Corrigan Oil 200 at the Michigan International Speedway when his #63 Fr8Auctions.com Chevrolet exited with suspension issues after 7 of 100 laps.

The journeyman Hill continues to accrue valuable seat time as he splits his efforts across all three of NASCAR’s top divisions. Last weekend saw him enter both Saturday’s Truck Series race for Mike Mittler, then Sunday’s Cup race with Carl Long’s Motorsports Business Management, where his #66 Chevrolet would debut new sponsorship from Rewards.com.

Saturday’s race was Hill’s 30th combined start of the season and his third in Trucks. He’d previously finished 28th at Charlotte for Beaver Motorsports, failed to qualify at Kentucky with the same team, then run 28th again at Pocono in NEMCO’s #87 Chevrolet.

In practice, Hill ranked 24th of 28 drivers in the first session, 27th of 32 in Happy Hour, and split the middle in qualifying, taking the 25th spot with a best lap of 177.109mph (40.653 seconds). The lone DNQ of the weekend was Camden Murphy in the #0 Driven2Honor.org Chevrolet for Jennifer Jo Cobb Racing. Murphy, who joined the withdrawn Mike Harmon Racing entry on the early ride home, was faster than three qualified trucks: Josh Reuame, Norm Benning, and last-place starter Bayley Currey in Copp Motorsports’ #83 Nutriblade Chevrolet.

Sent to the rear prior to the start were Tate Fogelman (#20 Randco Chevrolet) and Justin Haley (#24 Fraternal Order of Eagles Chevrolet), both for engine changes, as well as tire changes on the fleet Toyotas of Spencer Davis (Kyle Busch Motorsports’ #51 JBL / SiriusXM Toyota) and Matt Crafton (ThorSport’s #88 Hormel / Menards Toyota).

In the race itself, Hill pulled behind the wall during the opening 21-lap green-flag run, done for the afternoon with suspension issues.

31st went to Matt Mills, who had earned a strong 4th-place starting spot in DGR-Crosley’s #54 J.F. Electric / Crosley Brands Toyota. Mills’ day ended on the restart following Stage 1 when he broke loose in the first corner and backed hard into the outside wall.

The rest of the Bottom Five was filled in short order. 30th went to Joe Nemechek, whose #87 Petron Plus Chevrolet pulled out as the race restarted from the Mills caution. B.J. McLeod parked the Reaume Brothers’ second truck, #34, eight laps later. Closing out the group was Reed Sorenson, who had a busy day splitting time in Ross Chastain’s Cup car, out after 47 laps in Beaver Motorsports’ #50 SobrietyNation Chevrolet.

Hill closed out his Michigan weekend with a 37th-place finish in Sunday’s Cup race, citing electrical issues in the closing stages.

LASTCAR STATISTICS
*This marked MB Motorsports’ sixth last-place finish of 2018 and their second in a row, following Bayley Currey’s run in the #63 two weeks ago in Pocono.
*This was the first time that the #63 has finished last in a Truck Series race at Michigan. 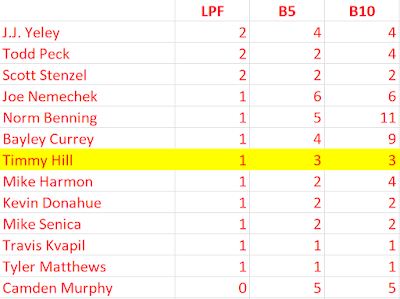