Joe Nemechek picked up the 4th last-place finish of his Camping World Truck Series career in Sunday’s Chevrolet Silverado 250 at Canadian Tire Motorsports Park (Mosport) when his #87 D.A.B. Constructors / Fleetwing Corporation Chevrolet fell out with brake problems after 2 of the race’s 65 laps.

With six races to go in 2018, Nemechek is now this season’s LASTCAR Truck Series leader by two bottom-five finishes ahead of Bayley Currey, who just took the lead last week at Bristol. The title battle remains anyone’s to win at this point with Nemechek prevailing in a five-way tie over Currey, J.J. Yeley, Todd Peck, and Scott Stenzel, each just one finish ahead of the field.

Mosport marked the elder Nemechek’s fifth Truck Series attempt since Gateway and his fourth in his NEMCO Motorsports team’s second truck, the #87. The lone exception came last month at Pocono, when his son John Hunter Nemechek was running the XFINITY Series event at Iowa. Joe finished 10th that day, his third top-ten finish of the year. Joe’s other runs in the #87 have been predominately “start-and-park” efforts. He finished 28th at Chicagoland, failed to qualify at Kentucky, and ran 30th at Michigan. As John Hunter climbed aboard the #8 with designs on repeating his 2016 win at Mosport, Joe drove the #87 once again.

With rain in the area, Joe Nemechek didn’t participate in Friday’s opening practice, then jumped to 20th of the 30 drivers to run Happy Hour after turning just three laps. In qualifying, Joe settled for 29th on the grid as one of the 12 drivers who didn’t turn in a qualifying lap (UPDATE: Reports indicate this large number of non-qualifiers was because the track was damp, and a number of teams either were unable to afford rain tires or saw no use in doing so with better weather forecast for Sunday). With exactly 32 trucks for 32 spots, everyone from 21st-place Bo LeMastus on back was set by the rulebook with Nemechek fourth of the five listed as in by Owner Points.

Starting last was Mike Harmon, whose #74 Chevrolet was a late entry to the lineup, which stood at just 31 trucks on Wednesday. Joining Harmon at the rear were Grant Enfinger, who had to surrender the 11th spot on the grid due to last-minute repairs for an electrical issue. Norm Benning also surrendered the 25th starting spot for unapproved adjustments on his #6 Zomongo / H&H Transport Chevrolet, and Austin Wayne Self’s #22 Go Texan Chevrolet gave up 18th due to an engine change.

On the third lap, Joe Nemechek was shown off the track on FS1’s leaderboard. As the rest of the field crossed the stripe, Joe’s truck fell from 30th to last, having pulled into the garage area. On the other side of pit wall, Harmon crossed the stripe in 31st, 68.815 seconds back of the lead. Another 26.810 seconds ahead of Harmon, Ciccarelli had reeled in K&N Pro Series regular Jesse Iwuji, the U.S. Navy veteran turned racer making his first national touring series start. Ciccarelli closed to the rear deck of Iwuji’s #34 Zulu Audio / Silk Title & Escrow Chevrolet, the second Reaume Brothers Racing entry, with just 0.111 second between the pair. Ciccarelli made his way past, and both Harmon and Iwuji were down a lap by the end of Lap 7. Harmon joined Nemechek in the garage after he lost his circuit to the leader, settling in at 31st.

Ciccarelli made his way to 28th before he fell out of the race with a vibration after 34 laps. Between he and Harmon, the Bottom Five was filled by 30th-place Max Tullman, whose #20 Zoomi Chevrolet from the Young’s Motorsports stables stalled at the far end of the course after the transmission failed, drawing a caution. Three laps in front of him came Jennifer Jo Cobb, out with a ruptured oil line in her #10 Driven2Honor.org Chevrolet.

LASTCAR STATISTICS
*This was the first last-place finish for both Joe Nemechek and the #87 in a Truck Series race at Mosport.
*It was also Nemechek’s 43rd last-place finish across NASCAR’s top three series, still a distant second in the overall rankings behind Jeff Green, who turned in his 117th at Road America. 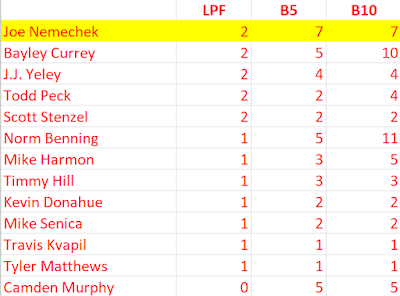