Bayley Currey picked up the 2nd last-place finish of his NASCAR Camping World Truck Series career in Thursday’s UNOH 200 at the Bristol Motor Speedway when his #83 Chasco Constructors Chevrolet was collected in a crash after 13 of 200 laps.

With the finish, Currey takes the 2018 LASTCAR Truck Series lead from J.J. Yeley, who he now leads by one bottom-five and six bottom-ten finishes with seven races to go. But the battle remains so close that a last-place finish by any of the five drivers behind him could drop him to second place.

Following the Pocono weekend, Currey reunited with D.J. Copp’s sister team to Mike Mittler’s MB Motorsports, driving Copp’s #83 Nutriblade Chevrolet to a 27th-place finish at Michigan. The Bristol weekend would see him in the #83 once again, part of a double-header at the concrete short track. Currey was slated to make his third XFINITY start of the season and his second as driver of JP Motorsports’ #55 Prevagen Toyota.

Back at the shop, Currey and the Copp Motorsports team burned the midnight oil to get the white #83 Chevrolet ready for Bristol. Currey tweeted a picture of the team loading the then-unsponsored truck onto the back of the hauler around 11:30 P.M. before heading to the track. The crew arrived in time, and by daybreak, the truck carried hood and quarter-panel logos from Chasco Constructors.

On Thursday, Currey anchored the charts in Friday’s opening practice session with a lap of 112.977mph (16.984 seconds), 1.6 seconds off the fastest lap turned by Myatt Snider. He then improved to 33rd of 37 drivers in Happy Hour, a good sign since even after three teams withdrew, five more teams would be sent home after qualifying. Currey ended up relying on Owner Points in time trials, fastest of the five to do so with a lap of 121.029mph (15.854 seconds), an improvement by more than a second since the first session.

The five drivers who missed the race were Gray Gaulding in Beaver Motorsports’ #50 VIPracingexperience.com / Image Tech Chevrolet, 2012 winner Timothy Peters in Ricky Benton’s #92 BTS Tire & Wheel / Carquest Auto Parts Ford, B.J. McLeod who was swapped into owner-driver Josh Reaume’s #33 Steve King Foundation Chevrolet, Jennifer Jo Cobb in her #10 Driven2Honor.org Chevrolet, and Norm Benning in his #6 Zomongo / H&H Transport Chevrolet. According to artist Rob Taylor, who works on Norm Benning’s team, the veteran was driving his repaired truck from Eldora, and will run it again at Mosport. Benning nearly was collected again at Bristol when Matt Crafton routed him out of the way in practice.

Starting 32nd on Thursday night was Wendell Chavous in Premium Motorsports’ #49 SobrietyNation Chevrolet. Joining him at the back were Austin Wayne Self, who lined up 24th in the #22 AM Technical Solutions / Go Texan Chevrolet, and 29th-place Jordan Anderson’s #3 Rusty’s Off Road / Bommarito.com Chevrolet, both for unapproved adjustments. Both made quick work of Chavous at the start, and the #49 held down the 32nd spot through the race’s early laps.

On Lap 13, however, Chavous pulled to the apron of the track as trouble broke out in front of him. Though the start of the wreck was missed by the FS1 cameras, 22nd-place starter Scott Lagasse, Jr. spun down the frontstretch with a flat left-rear tire. Lagasse was entered in a brand-new team, On Point Motorsports, which fielded an unsponsored Toyota owned by his crew chief Steven Lane.

As the replay rolled on, Currey’s truck was seen running past in the high lane just in front of the camera. Though unclear at the time, Currey’s radio traffic indicated that the #83 had made contact during the incident, punching out the radiator. The next time by, Currey came down pit road and incurred a penalty for pitting when the lane was closed. This was served in the garage as the #83 went behind the wall, the truck parked under the “Crash Clock.” On Lap 20, someone over the radio said “We’re done,” and the team’s night was over. Lagasse returned to action, but his truck was never the same, and he pulled off the track just four laps after the ensuing restart, leaving him 31st.

Finishing 30th was Chad Finley in his own #42 Auto Value Certified Service Centers Chevrolet. Finley was making his first series start since his successful return to Truck Series competition at Gateway, where he ran an impressive 6th. Finley once again impressed at Bristol, this time in qualifying, where he went from 22nd in Round 1 to 12th in Round 2, moving his team all the way to the final Round 3, where this time he ranked last of the group by six-hundredths of a second. Unfortunately, his luck ran out on race night, where the engine let go just 61 laps in.

Two other top qualifiers rounded out the Bottom Five. In 29th came Myatt Snider, who spun and crashed out of a 15th-place run at the end of Stage 2 after he made contact with Noah Gragson off the fourth corner. Snider’s #13 The Carolina Nut Co. Ford returned to the track at a reduced speed, only to pull into the garage with power steering issues. A power steering failure also saddled the effort of polesitter Christopher Bell, who qualified in relief of an ailing Harrison Burton in the #51 Hunt Brothers Pizza Toyota. Bell led 31 laps, but ended up 28th, 16 circuits behind at the checkered flag.

Currey returned to action in Friday night’s Food City 300, where he steered JP Motorsports’ #55 Toyota to a 27th-place finish, the last car to finish under power.

LASTCAR STATISTICS
*This marked the first Truck Series last-place finish for the #83 at Bristol. 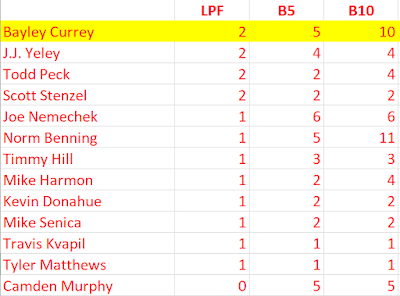