K&N WEST: Will Rodgers continues season of highs and lows at Gateway

Note: As shown in the previous East/West combo race, LASTCAR points are scored based on series that drivers run the most.

Will Rodgers finished last for the first time in his NASCAR K&N Pro Series West career in Saturday night’s Monaco Gateway Classic at Gateway Motorsports Park when his #10 Port of Tucson / Norman Levin Racing Chevrolet blew an engine after 6 of 120 laps. The finish came in Rodgers’ 27th career start.

Will Rodgers. The name will ring a bell for most diehard NASCAR fans, if not casual fans. He first broke on to the scene last year with a second-place finish to Kevin Harvick in the K&N East race at Sonoma and then winning both K&N East road course races. With that performance, as well as running the full West season en route to a fifth-place points finish, Rodgers seemed locked and loaded for 2018. He announced a partial ARCA schedule with Ken Schrader Racing, which has gone well to date. On the K&N side, things were more uncertain. Rodgers did not secure enough funding for another full West season with Jefferson Pitts Racing, so he joined REF Motorsports for the non-road course races while running with JPR for the three road course races. After winning Sonoma over a few Cup regulars and a commanding win at New Jersey Motorsports Park in the East, Brett Moffitt stole a victory from Rodgers at Watkins Glen. After the road courses, which included an appearance of Jeff Gluck’s podcast, the spotlight once again shone somewhere else, and Rodgers joined Norman Levin Racing, owned by longtime West racers Matt Levin and Ron Norman, to drive the organization’s #10 entry at Gateway.

The last combination race, at Iowa, drew 25 cars. 28 were initially slated to race, but that number dropped to 26 for practice and the race. The NextGen Motorsports #55 entry, which never named a driver, did not participate, as did the MDM Motorsports #41 entry, which had Sam Mayer listed as driver. Mayer was also listed as the driver of the #12, and ran that machine throughout the weekend. A familiar name was at the bottom of the charts for the weekend – Chuck Buchanan Jr., who finished last at Bristol earlier this year. His lap of 36.8 seconds was three seconds slower than Spencer Davis’ fastest lap. That lap also wound up being the pole-winning lap, as qualifying was canceled. Buchanan, then, started last.

The 87 didn’t hold last for long. With six laps complete, Rodgers, who took the place of Levin (initially on the entry list), stopped in turn one, the engine cooked. Andrew Engberson, making his series debut for Patriot Motorsports Group, was next to fall out, citing brake issues. Hailie Deegan was last of the West contenders to fall out, victim of a crash after 75 laps. Takuma Koga and Bill Kann rounded out the West Bottom Five, ten and three laps down respectively. 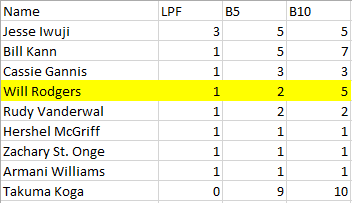