The combo of van Wieringen and RJR is a completely Canadian one. Tristan van Wieringen is the brother of Canadian hot shoe Dominique van Wieringen, who piloted the 30 RJR entry in 2016. Tyler Dippel piloted the entry for most of the 2017 season and looked set to come back to the organization in 2018, even announcing a Truck slate with the organization. That all burned down relatively quickly, as Dippel made the choice to break away from the organization after the season-opening race due to poor performance. He would, in Spencer Davis 2016-esque style, grab a race with MDM Motorsports before finding a home at DGR-Crosley for the remaining 12 races of the season.

The principals of RJR are Mark Rette and Terry Jones, Rette a former crew chief for Eddie Sharp Racing (winning the ARCA championship in 2009 with that team) and Red Horse Racing and Jones, a Canadian pilot who up until 2017 ran mainly restrictor plate tracks in ARCA with the occasional foray into Trucks. The two formed Rette Jones Racing in 2015.

This year, the team ran the ARCA race at Daytona with Grant Quinlan. He would later step in to the K&N car once Dippel left, scoring the pole for the first South Boston race. He left after a fourth-place finish at New Jersey Motorsports Park, a season-best. Neither the team nor Quinlan had any comment about the split, and van Wieringen joined the team after a test at Motor Mile Speedway in time for the race at Thompson Speedway. It has been a difficult transition, with the driver recording finishes of eleventh, ninth and fourteenth before the Glen. RJR also has a technical alliance with Danny Watts Racing and their #82 team, that machine being driven by Spencer Davis.

The entry list was a typical one for a road course companion event with Cup. 25 cars showed up, or the same amount of cars that showed up for the East-West combo race at Iowa. The race had three main groups of drivers competing: drivers coming down from higher ranks, road ringers, and lastly, K&N regulars. The first group included Noah Gragson, Harrison Burton, Bubba Wallace, Erik Jones, Brett Moffitt and surprisingly Austin Hill, who took Brandon McReynolds’ normal drive in the Visconti Motorsports #74. The road ringers included Juan Manuel Gonzalez, Ernie Francis Jr., Dale Quarterley, Scott Heckert and perhaps the fastest road ringer in a long time, Will Rodgers. Of course, a decent-sized contingent of K&N regulars rounded out the field, including Sam Mayer driving for MDM Motorsports, his ride with Jefferson Pitts Racing taken by Wallace this week.

Bill Hoff withdrew without taking a time in practice, leaving 24 cars to run the session. Robert Pawlowski, known as “Farmer Bob” on the name rail, trailed first practice, his lap of 1:41 trailing last weekend’s last-placer Chase Cabre by two and a half seconds. Quarterley, who fielded Pawlowski’s first-ever K&N ride at this same track last year, started last due to his #32 team having the least amount of owner points of the 24 cars racing after qualifying was washed out.

Rette Jones Racing brought a hot rod to the track, one that the driver felt like had a spot on the podium. Unfortunately, it was not meant to be on this particular day, as the 30 car spun in the last turn on Lap 15 and later stopped in the inner loop on Lap 29 to become the race’s first retiree. Juan Manuel Gonzalez was the last car running in 23rd. In 22nd was Colin Garrett, early issues with the team hauler compounded by electrical woes. Dillon Bassett was two laps down in 21st and Noah Gragson rounded out the Bottom Five in 20th after a one-lap penalty for taking fuel under green. 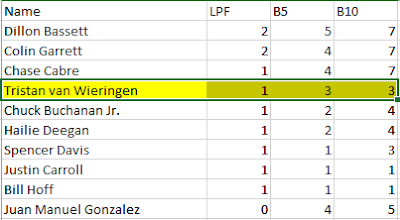 Great post, keep the hard work, always interesting to see your posts and statitics about the lastcars in the races. I'm commenting to say that the Juan Manuel Gonzalez completed 33 laps instead of 41 (obviously), RR just updated it!