Gray Gaulding picked up the 3rd last-place finish of his Monster Energy NASCAR Cup Series career in Saturday’s Bass Pro Shops / NRA Night Race at the Bristol Motor Speedway when his #99 StarCom Fiber Chevrolet was crashed out in a massive pileup after he completed just 1 of the 500 laps.

It was perhaps poetic that Gaulding should be the featured driver this week, as Saturday had special significance to his former team, BK Racing. Gaulding started the season with BK, which had scaled back from two cars to just their Chartered #23. Amid gathering reports of the team’s insolvency, Gaulding arrived at Daytona in an unsponsored car, a car which then carried logos from Earthwater, which reportedly paid its sponsorship dues with bottles of their product.

Through the season’s first 17 races, Gaulding never finished on the lead lap and ran no better than a 20th at Texas, and Earthwater’s logos disappeared. Despite putting forth a positive attitude on the team’s radio, Gaulding was released from the team after a 31st-place at Chicagoland.

While J.J. Yeley, Blake Jones, and Spencer Gallagher split time in the #23, each bringing sponsorship for one-off starts, Gaulding was absent from the Cup Series until last Sunday at Michigan, where he ran 33rd in StarCom Racing’s second car, the #99 StarCom Fiber Chevrolet. In doing so, Gaulding joined another rotating group of drivers including Garrett Smithley, Kyle Weatherman, teammate Landon Cassill, and team owner Derrike Cope.

Gaulding would return to the #99 at Bristol, and was set to run double-duty in the Truck Series, but his #50 Chevrolet from Beaver Motorsports failed to qualify. On the Cup side, Gaulding ran 38th in the opening practice and anchored the charts in Happy Hour, 41st and last. This made qualifying even more tense, as his #99 was one of the five “open” teams competing for the final four spots. A tight battle ensued between Gaulding, Timmy Hill, and B.J. McLeod, who ran more laps – 12 – than anyone in Round 1. Hill’s final lap bumped him ahead of Gaulding, who edged McLeod for the final “open” spot by exactly one-hundredth of a second. McLeod, driving Rick Ware Racing’s second car, the #52 Jacob Companies Ford, was sent home.

The 40th and final starting spot belonged to Blake Jones, who reprised his role driving BK Racing’s #23 Toyota. In addition to carrying sponsorship from the Tennessee XXX Shine Company, Planet Fitness, KBM Commercial Properties, and Champion Machinery, among others, the quarter panels carried the names of the BK Racing crew. As it turned out, Saturday would mark the final race for the #23 under the BK banner as the team and its Charter would be sold the following Tuesday. Jones, who made his series debut with the team at Loudon, joined Alex Bowman, Landon Cassill, Matt DiBenedetto, Corey LaJoie, David Ragan, J.J. Yeley, and Gaulding as drivers starting Saturday’s race who had also run Cup races for BK.

Joining Jones at the back of the field was Austin Dillon, his #3 Dow NORKOOL Chevrolet slated to start 18th until it failed pre-race inspection three times before passing on the fourth. Car chief Greg Ebert was ejected from the track. By the time the green flag dropped, however, Gaulding’s teammate Landon Cassill had lagged back in 39th in the #00 StarCom Fiber Chevrolet, as had Timmy Hill’s #66 Beef Jerky Outlet Toyota, now back in 40th. This proved fortunate just a few seconds later, when trouble broke out among the leaders.

Coming off a disappointing crash while leading Friday’s XFINITY race, Kyle Busch was racing under Ryan Blaney for 6th when Busch lost control off the fourth corner and stopped near the apron of the track. Thirteen other cars piled in after, including Michael McDowell and Jesse Little, who both struck the driver’s side of Busch’s stopped car. Gaulding was still well back of the wreck as it started, but was closing much too fast. He struck the right-rear of McDowell’s #34 Love’s Travel Stops Ford, then bounced into the right-front of A.J. Allmendinger’s damaged #47 Kroger ClickList Chevrolet.

When the dust settled, all cars involved started moving again with the exception of Gaulding and Allmendinger, both stopped in the middle of the track. Gaulding’s car was first to be towed back to the garage. Similar to Pocono last summer, RaceView and NBC both showed Gaulding move from 40th to 39th as the tow moved him past Allmendinger. The #47 was then towed in on Lap 7, apparently set for his first last-place finish since Sonoma. However, the NASCAR.com leaderboard correctly indicated Gaulding, running behind Allmendinger the lap before the crash, was properly classified last with the #47 in 39th. NBC corrected the error by the checkered flag.

In the same crash, Bubba Wallace suffered heavy front end damage to his #43 Medallion Bank / Petty’s Garage Chevrolet, but rolled around for two caution laps before he stopped on pit road and climbed out, securing him 38th in the running order. McDowell turned seven more laps under yellow before he, too, pulled into the garage and out of the race, leaving him 37th. 36th looked to go to Corey LaJoie, who suffered left-front damage to his #72 ARK.io Blockchain Solutions Chevrolet as he negotiated the outside lane during the crash. But LaJoie returned to action 99 laps down, dropping to 36th the #21 Menards / Knauf Ford of Paul Menard, who clobbered the Turn 4 wall due to a vibration after the restart. Menard took the spot from LaJoie on Lap 128.

LASTCAR STATISTICS
*This was the first time the #99 finished last in a Cup race at Bristol since March 22, 1964, when Gene Hobby’s #99 M.E. Whitmore, Inc. 1962 Dodge started last and was flagged off the track after 2 laps. The car, which Hobby purchased that year from Larry Thomas, is featured in this excellent article on Legends of NASCAR. 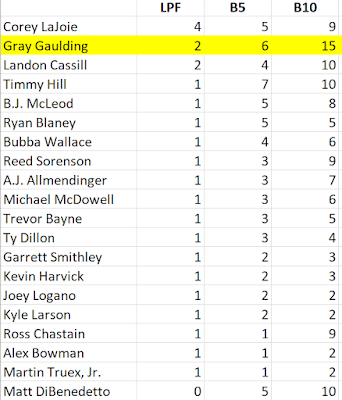