Corey LaJoie picked up the 6th last-place finish of his Monster Energy NASCAR Cup Series career in Sunday’s Consumer Energy 400 at the Michigan International Speedway when his #72 Schluter Systems Chevrolet fell out with engine problems after 37 of 200 laps.

The finish, which came in LaJoie’s 47th series start, was his series-leading fourth of the 2018 season and his first since Dover, 12 races ago. In the Cup Series last-place rankings, it was the 16th for car #62, the 683rd for engine trouble, and the 752nd for Chevrolet. Across NASCAR’s top three series, it was the 31st for the #72, the 1,062nd from engine trouble, and the 1,618th for Chevrolet.

LaJoie and teammate Cole Whitt have continued to share time behind the wheel of TriStar Motorsports’ #72 Chevrolet. Since Dover, LaJoie has driven in 9 of 12 races, starting with Kansas, where sponsor Schluter Systems debuted a new inverted version of the black-and-orange paint scheme. The 24th-place finish LaJoie earned that night stands as his season-best, offsetting an uneasy start to 2018 that saw him blow engines in three of his first four starts, finishing last each time, and a hard crash in Pocono’s third turn.

The orange Schluter scheme returned for Michigan, where LaJoie would be one of 40 starters to fill the 40-car field. He began the weekend 33rd in the opening practice session and improved to 27th of 38 in the second. He qualified 32nd with a lap of 193.553mph (37.203 seconds) and ran 24 laps in Happy Hour, ranking 34th of 36.

Starting last was Daniel Suarez, a surprise given his career-best runner-up finish at Pocono and his top-five showing in Watkins Glen. Suarez showed speed in the opening practice, ranking 3rd behind Denny Hamlin and Kurt Busch, but in Round 1 of qualifying slapped the wall in Turn 2. Knowing their car was fast, the Joe Gibbs Racing crew decided to fix the #19 rather than roll out the backup. The repairs and lack of a completed timed lap meant that the #19 would have to roll out 40th and last on the grid.

On Sunday, Michigan saw last place change hands before the race even began. After the first pace lap, Watkins Glen last-placer Joey Logano pulled his #22 Shell / Pennzoil Ford down pit road. The Penske Racing crew had discovered in inspection that they had installed the wrong left-front shock in the Ford, forcing the crew to make the switch on pit road. This cost Logano his starting spot, and he closed in on the tail end of the field.

Thus, when the race started, Logano was already ahead of five drivers and lined up 35th on the inside of Gray Gaulding (#99 StarCom Fiber Chevrolet), back in Cup for the first time since his release from BK Racing.

When the race began, Gaulding made contact with the #51 Jacob Companies Chevrolet of B.J. McLeod, causing a tire rub on Gaulding’s car. Behind them in 40th, Blake Jones had taken last on the break, but was quickly reeling in Timmy Hill’s #66. On Lap 3, Jones drove past Hill near the start / finish line, dropping the #66 to the last spot. Hill only held this spot briefly as Gaulding dropped behind both cars, preparing to make an unscheduled stop due to the tire rub. Gaulding returned to action on Lap 6, when he was two laps down. McLeod made an unscheduled stop of his own the next time by and lost one lap. He was saved from falling two down by a spinning Erik Jones off Turn 4, the incident drawing the first yellow of the day.

On the restart, Gaulding was still in last when trouble once again broke out among the leaders. This time, it was Martin Truex, Jr., whose #78 5-hour Energy / Bass Pro Shops Toyota was knocked into a Turn 1 spin after William Byron’s #24 Liberty University Chevrolet broke loose under him. While Truex managed to avoid any contact, Byron did not, backing the #24 into the outside wall. Both cars came down pit road, where they again faced different outcomes. While Truex managed to stay on the lead lap after minor repairs, Byron lost two laps and took last from Gaulding on Lap 18.

Byron managed to return to competition for the restart, and on Lap 22 passed Gaulding for 39th coming off Turn 4. Though still two circuits behind, Gaulding began to show competitive speed as on Lap 24, he caught and passed Jeffrey Earnhardt’s 33rd-place car that was still on the lead lap. Byron earned the Lucky Dog when a competition caution came soon after, then retook last from Gaulding when he stopped at pit entrance just prior to the restart. Despite the lost ground, Byron caught and passed Timmy Hill by the end of the next lap, and looked to gain the one-circuit deficit he had on 39th-place Gaulding.

LaJoie didn’t enter the last-place battle until Lap 38, when he slowed suddenly down the backstretch, then turned into the garage area. With all other cars still running, LaJoie took last from Byron on Lap 40, and would hold it the rest of the afternoon. While the TriStar team looked to get the #72 back on track, puzzled by a dropped cylinder, what the driver later tweeted as a “broken valve spring retainer” proved to be enough to end their race. The car was pulled off RaceView at the end of Stage 1 on Lap 60, then listed as “OUT” on NBCSN’s leaderboard by Lap 73.

Jeffrey Earnhardt finished 39th, citing engine trouble of his own on the Gaunt Brothers entry. Earnhardt’s twitter feed showed him give his driving gloves to two young fans in the infield as he left the garage. 38th-place Ty Dillon encountered the day’s scariest incident, when his #13 GEICO Chevrolet struck what appeared to be either a piece of tungsten ballast or a battery, exploding beneath the car and sending him hard into the Turn 3 wall. Timmy Hill’s first race with Rewards.com ended with electrical woes while William Byron lost a total of 13 laps before he crossed the line 36th, the final car under power.

LASTCAR STATISTICS
*This marked the first Cup Series last-place finish for the #72 since June 20, 2004, when owner-driver Kirk Shelmerdine’s #72 Fairfield Inn by Marriott Ford had handling woes after 13 laps of the DHL 400. 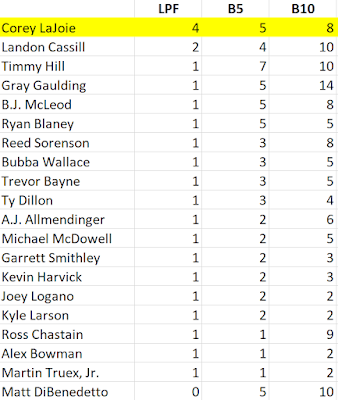