Richard Doheny scored the second last-place finish of his ARCA Racing Series finish in Sunday’s Allen Crowe 100 at the Illinois State Fairgrounds when his #11 Fast Track High Performance Driving School / Fast Track Racing Ford fell out with transmission issues after 1 of 106 laps. The finish came 26 races after his other last-place finish, at Madison in 2017.

Doheny has been somewhat of a frequent competitor the last few years, at least by ARCA standards. Little is widely available on him outside of his ARCA results, which include 20 starts across six years, with a career-high eight starts coming in 2016. All but one have come for Andy Hillenburg’s Fast Track Racing. The one that wasn’t resulted in one of the worst weekends of his career. Entered for Max Force Racing and Thomas “Moose” Praytor at this same track in 2016, a vicious crash saw Doheny knock out the gate in turn four and hit a pole outside the track, completely destroying the front end of the #23 machine.

Doheny's starts with Hillenburg have been less eventful, all but one ending prematurely in the garage, but no less important as the ARCA equivalent of MBM Motorsports soldiers on - a journeyman driver-turned-owner at the helm, running all manufacturers, bringing in a rotation of young guns and wily old vets and being one of the longest-tenured and most-respected operations in the ARCA garage.

The entry list at Illinois fluctuated in the preceding weeks, as teams shuffled drivers in entries right up until the days before. 24 cars were listed on the online entry list, including a number of returns and familiar faces to ARCA. Most notably, Kelly Kovski and his Allgaier Motorsports crew returned for their first race of the year, as did Alex Clubb and his own team. Adding to the “first-time-this-year” list was Ryan Unzicker and Hendren Motorsports. Several part-time drivers and teams also returned. Tommy Vigh Jr. made his second start and Bryan Dauzat deviated from his normal superspeedway schedule to run Springfield. USAC sensation Logan Seavey made his first of two scheduled starts with Venturini Motorsports, and Wayne Peterson Racing originally had Con Nicolopoulos in its 06 car before shuffling him to the 0 and entering “Buck S.” in the 06. Buck turned out to be James “Buck” Stevens, set to make his ARCA debut. To cap off the shuffling, Bret Holmes returned to the Ken Schrader Racing stable and Dale Shearer made their returns to the series after both went through a hiatus, respectively. Not on the entry list was Thomas Praytor, who after shutting down his team after Talladega promised a return to dirt.

Practice proved to be eventful. On Buck’s first lap, the engine on his car blew, quite possibly setting the record for shortest debut weekend ever. Will Kimmel’s engine also decided to let go, and his shoestring operation decided to let go. Con Nicolopoulos’ #0 machine never made it on track, as did Shearer’s #73. Shearer messaged his fans that he was recuperating from an illness, and that his car is ready to run in the following dirt race at DuQuoin. The slowest in practice was Doheny, his lap of about 43 seconds ten seconds slower than leader and dirt ace Sheldon Creed.

Qualifying was a hotly contested session at the front, with the pole margin at three-thousandths of a second. That wasn’t the case at the back of the field, as current LASTCAR championship runner-up Brad Smith failed to make a lap, securing the last starting spot. Doheny ran a lap of 41 seconds, the slowest of cars to take time.

The race started mid-afternoon Sunday, and like many ARCA races, the last-place battle was over just as the race began. Doheny fell out after one lap, citing transmission issues. Mike Basham pulled in after 18 laps, and although no official cause was released, right-rear damage may have been the culprit. Chase Purdy suffered an oil line failure around the quarter mark of the race, Zane Smith had to retire with an overheating machine midway through and Joe Graf Jr. crashed out after 87 laps to complete the Bottom Five. All other cars were running at the conclusion of the event. 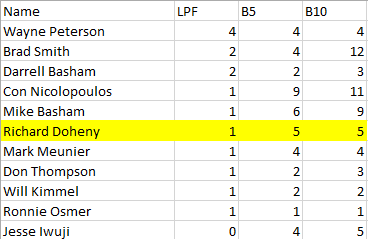