XFINITY: Like their debut, first last-place run for Fury Race Cars LLC and Kaz Grala comes as a surprise

Kaz Grala picked up the 1st last-place finish of his NASCAR XFINITY Series career in Saturday’s Overton’s 300 at the Chicagoland Speedway when his #61 Kiklos / IT Coalition Ford fell out with electrical issues after completing just 1 of the race’s 200 laps.

The finish came in Grala’s 15th series start. In the XFINITY Series last-place standings, it’s the 16th for car #61, the 47th by reason of electrical problems, and the 155th for Ford. Across NASCAR’s top three series, it’s the 28th for the #61, the 117th caused by electrics, and the 939th for Ford.

When the white flag fell on the evening of February 24, 2017, Grala appeared headed to a strong 3rd-place finish in his first Truck Series race at Daytona. The 18-year-old was making just his 10th series start, having parlayed a solid two-and-a-half years in the K&N Pro Series East into a top-flite ride with GMS Racing. Sponsoring the effort was Kiklos Olive Oil, which backed Grala’s K&N effort in 2015. The brand and the driver ended up getting more exposure than they bargained for. Contact between leaders Ben Rhodes and Matt Crafton triggered a massive wreck off Turn 2. Grala pulled low on the backstretch, and inherited the lead when the caution froze the field. Just like that, the Boston native was the youngest driver to ever win at Daytona.

Grala finished 7th in the series standings that year, and gained even more of a fan following when a second victory just slipped from his grasp. Out front on the final lap of the Chevrolet Silverado 250 at Canadian Tire Motorsports Park, Grala was spun in the hairpin by Austin Cindric, leaving him a disappointing 3rd. Nevertheless, another opportunity had opened for the following season: an XFINITY Series ride with James Whitener’s two-car operation, JGL Racing.

JGL Racing converted from Toyota to Ford in 2018, and in so doing returned to a two-car operation. The team’s second car, the #28, had unexpectedly ceased operations the previous fall, leaving driver Dakoda Armstrong without a ride. Grala would take over the controls of the #24, which closed out 2017 with Dylan Lupton and Corey LaJoie. Grala began the year with another strong run at Daytona, finishing 4th, and stood 19th in points after Dover in May. It was after this race that news broke that Grala’s #24 would also suspend operations. One of the team’s reasons had to do with team owner Whitener, who has been struggling with liver disease since January. Two rounds later, the #28 team would also pull off the track after Dylan Lupton parted ways with the team. A vigorous Twitter debate ensued between Lupton and JGL over the exact reasons why.

While Lupton has continued to look for another ride, Grala managed to scrap one together out of whole cloth. Enter Fury Race Cars, a Mooresville-based company which has been building race cars for short track and road course racing since 2016. The deal came about as Grala’s father Darius is one of the company’s owners, a brain trust which also boasts Dale Earnhardt, Jr.’s former crew chief Tony Eury, Jr. and part-time ARCA and NASCAR competitor Jeff Fultz. On May 15, the team announced its intention to run the next four races on the schedule, and soon after tabbed Grala to drive. The team’s first cars were provided by JGL as part of a severance deal. NETTTS, which sponsored several of Grala’s races, including those at JGL, would back the new team.

The result has been one of the most impressive debuts for a start-up team in recent memory. The new #61 Ford lined up 16th for their team debut at Charlotte and came home 10th, Grala’s first top-ten finish since the Daytona opener. After a 16th at Pocono, he charged from last on the grid to threaten for the win in the late stages at Michigan before settling for 12th. The fourth race at Iowa saw the team’s best qualifying run, an 8th, followed by another 10th-place finish.

Much like Brett Moffitt’s Truck Series effort, Fury Race Cars LLC wasn’t originally scheduled to run at Chicagoland. However, likely due to these strong performances, the team was entered on the 42-car list. Kiklos rejoined Grala for the race, joined with the IT Coalition on the quarter-panels of the slate-gray car.

Once again, Grala and Fury showed surprising speed. After ranking 19th in opening practice, Grala briefly paced Happy Hour before he settled into 6th. He made Round 2 of qualifying, improving from 21st in Round 1 to 20th in Round 2 with a lap of 170.541mph (31.664 seconds). Things appeared set for a strong fifth outing for driver and team.

With 42 drivers entered, two owner-drivers found themselves on the outside looking in for the sixth time this season. Sent home were Morgan Shepherd, whose #89 Visone RV Chevrolet missed out for the first time since Pocono, three rounds ago, and the #74 Horizon Transport / Shadow Warrior Project Chevrolet of Mike Harmon, who trailed Friday’s Truck Series race.

Starting last on Saturday was Vinnie Miller, who shared sponsorship from Gerber Collision & Glass with his JD Motorsports teammate Ross Chastain. Miller’s #01 Chevrolet only held the spot briefly before Grala slowed on the apron of Turn 3, then came down pit road. According to the team’s report, Grala reported smoke in the cockpit before taking the green, and lost power before coming to pit road. The car was pushed behind the wall, and when repairs were unsuccessful, ended up the first retiree.

Current 2018 LASTCAR leader Jeff Green pulled his #93 RSS Racing Chevrolet behind the wall a lap later, citing fuel pump issues. The rest of the Bottom Five went to Carl Long’s Motorsports Business Management trio. Long himself had been slated to drive the #66, but by race day handed over the wheel to John Jackson, who cited suspension issues on the #66 CrashClaimsR.us Dodge. 38th went to Chad Finchum, who had engine problems on the #40 Smithbilt Homes Toyota, with 37th falling to Timmy Hill in the #13 OCR Gaz Bar Toyota.

If you’d like to support Fury Race Cars, the team now has t-shirts for sale at this link.

LASTCAR STATISTICS
*This marks the first XFINITY Series last-place finish for the #61 since November 1, 2003, when justin Ashburn’s 31-W Insulaion Chevrolet fell out with transmission woes after 14 laps of the Bashas’ Supermarkets 200 at Phoenix. The number had never before finished last in an XFINITY Series race at Chicagoland. 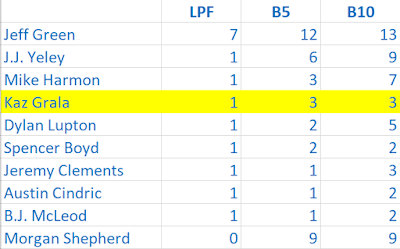