Jeff Green picked up the 110th last-place finish of his NASCAR XFINITY Series career in Friday’s Alsco 300 at the Kentucky Speedway when his unsponsored #93 RSS Racing Chevrolet fell out after 6 of 200 laps because of electrical issues.

Last Saturday, Green was again set for a strong run on the plate tracks, outlasting much of the competition in Daytona. But a wreck late in the race left him with the front clip virtually destroyed, joining the equally-battered Chevrolets of teammates Ryan Sieg and J.J. Yeley. For the Kentucky race, Green would run an all-black Chevrolet without any sponsorship, and would once again be on “start-and-park” duty.

Green didn’t complete a lap in time before the end of the opening session, leaving him last of the 35 drivers without a time or speed registered. He returned in Happy Hour to rank 30th, then qualified 28th for the race with a lap of 172.238mph (31.352 seconds).

Starting last was Josh Reaume, who found himself suddenly pulling double-duty at Kentucky. Without Kaz Grala and Fury Race Cars LLC on the entry list due to a lack of sponsorship, one spot was left open, threatening the first short XFINITY Series field in nearly four full years. Reaume, who was already at the track running his own Truck Series effort, was tabbed by Jimmy Means Racing to drive the team’s second car. Means entered what had been a #52 Striping Technologies Chevrolet that was renumbered #79, large white squares with the black number added on the doors and roof, similar to Carl Long’s drive with the team at Fontana in 2014. Long’s drive was the first of 10 times Means has fielded this “start-and-park” car to help fill fields, and Reaume would follow the same strategy.

Prior to the start of the race, Reaume was joined at the rear by Christopher Bell, Alex Labbe, and Mike Harmon, who were all penalized for unapproved adjustments prior to the race. Jeff Green joined them by voluntarily following to the back, looking to stay out of trouble. This allowed Green to pull into the garage area early, beating Reaume by three laps for the last spot. According to Seth Eggert, on assignment that night for Motorsports Tribune, Reaume first pulled into the Cup garage, sat there for two minutes, then backed up through the infield fan zone to the XFINITY garage. Eggert had to dodge the car as it went by, steam coming from behind the wheels and from under the hood.

Finishing 38th was Morgan Shepherd, who returned to action after his first withdrawal of the season at Daytona. Thirty laps after Shepherd’s exit for a vibration, Timmy Hill pulled Motorsports Business Management’s #66 CrashClaimsR.us Dodge behind the wall with a fuel pump issue. Rounding out the Bottom Five was Brandon Jones, whose #19 Menards NRG Toyota was eliminated in a crash on the backstretch after contact from a sideways John Hunter Nemechek.

LASTCAR STATISTICS
*This marked the second-straight last-place finish at Kentucky for Green and the #93. Green earned the 98th XFINITY last-place run of his career here last September. 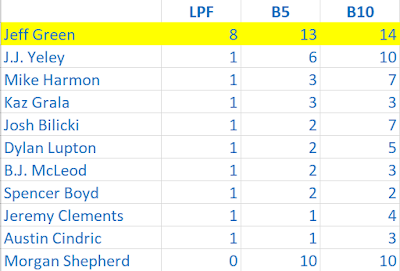