Tyler Matthews picked up the 1st last-place finish of his NASCAR Camping World Truck Series career in Thursday’s Buckle Up In Your Truck 225 at the Kentucky Speedway when his #83 Accent Imaging Chevrolet crashed out after 1 of 150 laps.

Tyler Matthews is one of many drivers working their way into NASCAR from short tracks all across the country. The 21-year-old from Richlands, North Carolina is the 2016 track champion at the Carteret County Speedway in Swansboro, competing in late models and limited late models. On April 21 of this year, he made his first start in the CARS Late Model Stock Tour at the Orange County Speedway, once a regular stop of the NASCAR XFINITY Series. In a field of 21 cars, Matthews finished 14th for his family’s team.

The previous month, an opportunity came to go Truck Series racing at Martinsville. He was tabbed by Matthew Miller’s team MDM Motorsports to drive the #99 Popeye’s BB&T Scott Stringfellow Chevrolet. He qualified 14th for the race and finished 21st, two laps down to race winner John Hunter Nemechek. On June 23, he was also the last-minute replacement at D.J. Copp Racing, climbing aboard the #83 First Reponder Racing Chevrolet. Even with a team with fewer resources, Matthews managed to almost match his run with MDM, finishing 17th.

Kentucky was Matthews’ next Truck Series start, where he would again drive Copp’s #83. This time around, his Chevrolet was black instead of white, more closely resembling a truck from Premium Motorsports instead of his Gateway ride, which looked like the #63 from MB Motorsports. Accent Imaging, which backed Matthews at Gateway, would return as sponsor, this time as the primary.

Missing the race were Joe Nemechek in his #87 Petron Plus Chevrolet and Timmy Hill, whose bid to start all three races last week ended with a slow lap in Beaver Motorsports’ unsponsored #50 Chevrolet. Curiously, Nemechek was faster than all five of the drivers who started in the Bottom Five on Owner Points, but was just under two-tenths slower than Bayley Currey for the 27th spot. Hill was two-tenths off Nemechek’s pace, but was still faster than the four starters.

Everyone was faster than last-place starter Myatt Snider, who broke loose during his qualifying lap in Round 1 and tagged the outside wall with the right-rear. The ThorSport team readied the backup, and Snider rolled off 32nd in his #13 FarmPaint.com Ford. He incurred a redundant tail-end penalty for the backup truck, joined by John Hunter Nemechek for unapproved adjustments on the #8 D.A.B. Constructors / Fleetwing Chevrolet and Stewart Friesen, whose #52 Halmar International / We Build America Chevrolet had a new engine under the hood.

It didn’t take long for trouble to break out. When the green flag dropped, the field pulled away slowly, jamming up the middle of the pack. Lined up between the #54 of Bo LeMastus and the #88 of Matt Crafton on the outside line, Matthews found himself at the point where the accordion compressed the tightest. As LeMastus pulled away, Crafton looked to the outside of Matthews, who was also working his way around Nemechek. Now three-wide entering Turn 1, Nemechek and Matthews made contact, sending the #83 sliding up the track. Matthews narrowly missed the other penalized trucks of Friesen and Snider as he fought for control. He ran out of race track soon after, and smacked the right-rear against the green retaining wall before spinning to the apron.

While the damage didn’t appear too extensive, Matthews pulled behind the wall, done for the night.

Finishing 31st was Camden Murphy, back in Jennifer Jo Cobb’s “start-and-park” #0 Driven2Honor.org Chevrolet. Cobb herself finished 29th, citing overheating issues on her #10. In between them came Bayley Currey, another of Copp’s drivers of the #83, who this time ran MB Motorsports’ #63 Chevrolet. Rounding out the group was Tate Fogleman, the only one in the Bottom Five to run more than 28 laps, who suffered suspension issues on Young’s Motorsports’ #20 RandCo Chevrolet.

For more on Tyler Matthews, check out his Facebook page here. 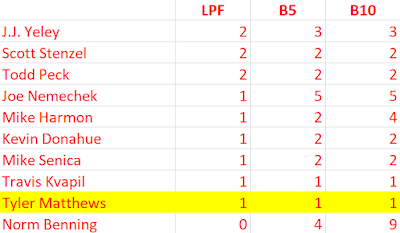