Bayley Currey picked up the 1st last-place finish of his NASCAR Camping World Truck Series career in Saturday’s Gander Outdoors 150 at the Pocono Raceway when his #63 G-Style Transportation / Cedar Peaks Chevrolet fell out with engine trouble after he completed 3 of 60 laps.

Currey is, in a modern sense, a grassroots driver. According to Dustin Albino’s feature on Frontstretch.com, Currey is a college student who transferred from Texas State University (near his hometown of Driftwood, Texas) to the University of North Carolina, Charlotte, where he’s continued pursuing his degree in mechanical engineering. The transfer also allowed him to find work at local race shops, helping out at Rick Ware Racing. Through networking among other small teams, Currey landed a Truck Series ride with Beaver Motorsports, and at Martinsville on October 28, finished under power in 25th. His next time out at Phoenix, Currey finished a strong 10th, the first-ever top-ten finish for Copp Motorsports.

Contrary to what I reported here at Loudon, Currey’s XFINITY Series debut did not come last week at Loudon. He took his first green flag in the series at his home track in Texas back in April, driving for B.J. McLeod. Once again, he impressed, rallying from 39th on the grid to finish 22nd, the seventh-best finish ever recorded by McLeod’s #8 team. It’s for this reason that, after Brandon Hightower unexpectedly left JP Motorsports in New Hampshire, Currey would climb behind the wheel of the #55 Toyota, where he again brought the car home in one piece, finishing 29th.

Currey’s part-time effort in the Truck Series has continued this year. Most of his starts have come with Copp Motorsports, with a handful of runs in Mike Mittler’s #63 Chevrolet. Pocono would mark Currey’s third start for Mittler’s team, and his first since a 30th-place showing at Kentucky earlier this month. The entry list indicated returning sponsorship from G-Style Transportation and Cedar Peaks, which backed Kyle Strickler’s strong run for Mittler at Eldora. In place of the white truck that Strickler ran on the dirt, the right-front heavily damaged in a wreck near the end of the race, Currey would drive a black truck with red accents. Photos of the truck by Sam Laughlin of “2018 Cautions” showed few sponsor decals except for a large Fr8Auctions.com logo on the rear “TV Panel.”

Starting last on the grid was championship contender Brett Moffitt, who didn’t turn a lap in qualifying following an engine change in practice, and incurred a redundant tail-end penalty One spot in front of Moffitt’s #16 Toyota Tsusho Toyota was another surprise, the fleet #18 Safelite Auto Glass Toyota. Noah Gragson steered the #18 to the fastest lap in the opening practice, but wasn’t cleared to qualify or race after he suffered flu-like symptoms. In his place came Cup regular Erik Jones, who would drop from 31st on the grid to the tail end for the driver change.

Joining Moffitt and Jones at the back of the field were four other drivers. Both Jennifer Jo Cobb’s #10 Driven2Honor Chevrolet and Austin Hill’s #02 Young’s Building Systems / Randco Chevrolet made unapproved adjustments. Hill had backed up a solid night in Eldora with a 9th-place starting spot, tied for the second-best of his career. Stewart Friesen’s #52 Halmar International / We Build America Chevrolet made an understandable tire change after a dramatic spin off Turn 2 in qualifying, somehow avoiding contact with either wall. Last of the group was Ben Rhodes, whose primary #41 The Carolina Nut Co. Ford backed into the wall in practice, forcing the team to roll out the backup.

Four of the final five positions filled during Stage 1. Currey pulled behind the wall one lap before J.J. Yeley, who gave Reaume Brothers Racing’s second truck, the #34 Steve King Foundation Chevrolet, its second-consecutive start. According to a report from the track by Sam Laughlin, Yeley overshot the entrance to the garage area, then backed up to pull back in.

The 30th spot fell to Reed Sorenson, back in Premium Motorsports’ unsponsored #15 Chevrolet. Sorenson made an early stop on Lap 1, then managed 16 more before his day was done. Sorenson and 29th-place Camden Murphy in the second Cobb truck, the #0, both pulled out during the yellow that ended Stage 1.

Rounding out the group was Timmy Hill, back in the Truck Series for the first time since Charlotte, who turned 23 laps in Joe Nemechek’s second truck, the #87 Toenjes Brick Contracting Chevrolet. Nemechek finished a strong 10th in his son’s #8.

Currey remained at the Pocono track through Sunday, where he helped out at the team that first hired him, Rick Ware Racing, and the driver he raced for in April, B.J. McLeod. Unfortunately, engine trouble left that car last as well.

LASTCAR STATISTICS
*This marks the second last-place finish for the #63 truck at Pocono. The other occurred August 2, 2014, when Justin Jennings’ turn in the truck ended after 2 laps. While Jennings’ truck carried Mitter’s number, it was actually a second entry from Young’s Motorsports, and carried sponsorship from Randco and Young’s Building Systems. Saturday was thus the first time Mittler’s entry trailed this event. 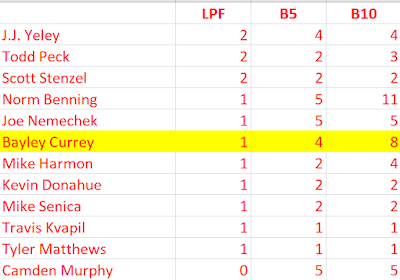