TRUCKS: Mike Harmon the first Truck Series last-placer to fall out with a busted oil cooler

Mike Harmon picked up the 7th last-place finish of his NASCAR Camping World Truck Series career in Friday’s Overton’s 225 at the Chicagoland Speedway when his #74 Troptions Chevrolet fell out with a broken oil cooler after failing to complete any of the 150 laps.

The 60-year-old Harmon continues to buck the odds, operating full-time in both the XFINITY Series and the Truck Series, fielding identical black Chevrolets (and, in XFINITY, the occasional Dodge) with a bright red #74 on each corner. Chicagoland marked just Harmon’s 13th Truck Series start since his previous last-place run and only his fifth as a driver. Harmon has so far been the only one able to get the #74 into the Truck Series fields, earning a season-best 22nd at Las Vegas. As of this writing, Cody Ware, Tim Viens, Bryant Barnhill, and B.J. McLeod have all picked up one DNQ apiece.

Harmon’s Chicagoland truck featured additional sponsorship from Troptions, which previously backed Robby Lyons this year at Daytona. It was one of 33 trucks on the preliminary entry list. However, when Mike Affarano’s return to the circuit was cancelled after his transporter broke down on the way to the track, Harmon and the rest of the entrants all started the race.

In practice, Harmon did not run the opening session and ranked 25th of 30 drivers in Happy Hour. He then ran 28th in qualifying with a lap of 161.180mph (33.503 seconds), the fastest driver to have to fall back on Owner Points.

Rolling out 32nd on Friday was Wendell Chavous, whose #49 SobrietyNation.org Chevrolet was the only truck to not turn in a lap in time trials. Chavous incurred a redundant tail-end penalty prior to the start for unapproved adjustments. Sent to the rear for the same reason was Camden Murphy, who had qualified a respectable 24th in Jennifer Jo Cobb’s “start-and-park” #0 Driven2Honor.org Chevrolet.

Harmon took the spot from Chavous and Murphy when he failed to complete the opening lap. The team tweeted that the truck was smoking due to a leak from the oil cooler. Despite efforts at a repair, the issue proved terminal.

Finishing just outside the Bottom Five in 27th was Bayley Currey, whose #83 Chevrolet from Copp Motorsports ran without a sponsor. Team partner Fr8Auctions.com had come to the rescue of Brett Moffitt, whose Hattori Racing Enterprises #16 Toyota had lost its sponsor. Reunited with the company that backed his former Cup ride at Front Row Motorsports, Moffitt successfully defended his 3rd-place spot in points with a last-lap pass for the win after John Hunter Nemechek’s Chevrolet ran out of fuel. Copp tweeted that his team did not lose Fr8Auctions.com as a sponsor in the Moffitt deal, and expects the brand to back his #83 in future races.

As for Harmon, the short night on the Truck side was followed by a DNQ for Saturday’s XFINITY race, his team’s sixth of 2018. Nevertheless, his team tweeted that the driver is looking forward to next Saturday’s XFINITY round in Daytona, where he will debut a new partnership with another military-themed organization. This time, it will be the Journey Home Project Foundation, founded by singer-songwriter Charlie Daniels.

LASTCAR STATISTICS
*Harmon is the first driver in Truck Series history to fall out with a busted oil cooler. It’s also only the fourth-ever time it’s happened in a NASCAR points race. The other three occurred in the Cup Series: Tighe Scott at Rockingham on October 21, 1979; Kyle Petty at North Wilkesboro on April 17, 1983; and the late Billy Standridge at Talladega on October 12, 1997.
*This is Harmon’s third-straight Truck Series last-place finish where he’s failed to complete the opening lap. 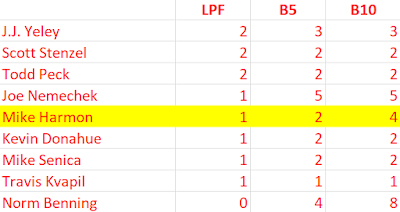