Wayne Peterson finished last for the 39th time in his ARCA Racing Series career during Saturday night’s Fans With Benefits 150 at Iowa Speedway when his #23 Holmes II Excavation / Wayne Peterson Racing Chevrolet was parked without completing a lap of the race.

The finish came in Peterson’s 104th series start and was his series-leading fourth on the year.

Peterson once again climbed behind the helm of the #23 machine, keeping Bret Holmes’ car up in points until he is ready to return, reportedly this weekend at Elko. Holmes, meanwhile, became the fourth different driver to drive Ken Schrader’s #52 car. David Sear took the helm of the 69, and Mason Mitchell made his first start of the year in his team’s second car. Darrell Basham made his second start of the year but first in his family’s #34 car. Andy Hillenburg filled his two cars with Rick Clifton and Richard Doheny, and the only driver to make his series debut at Iowa was Sam Mayer, a 15-year-old late model driver for JR Motorsports and native of suburban Milwaukee, just a couple hours' drive from this author. Mayer will return with MDM at Lucas Oil later this year and also has some K&N East races on tap.

Con Nicolopoulos, in his usual capacity as driver of the #06 for Wayne Peterson, anchored practice with a lap of nearly 33 seconds, about eight and a half seconds off of Zane Smith’s leading lap. He picked it up three seconds in qualifying to move up. Coincidentally, any lap would’ve been enough to lift out of last, as Mason Mitchell did not record a lap while completing an engine change.

Mitchell then incurred a redundant tail-end penalty for the engine change. In what is now a recurring storyline, Peterson completed the pace laps and then turned off as the green waved. According to the live ARCARacing.com chat, the 23 car was parked by the sanctioning body. Teammate Nicolopoulos pulled off a lap later, and Doheny retired only four laps in the race. The remainder of the Bottom Five came from accidents; Gus Dean pounded the inside wall 58 laps in and David Sear retired after a crash in turn four around the 90-lap mark. 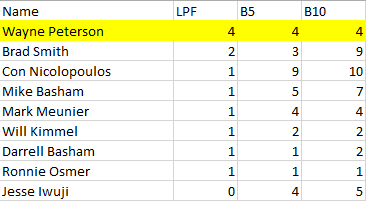