J.J. Yeley pulled a rare last-place sweep in the Truck Series and XFINITY Series rounds at the Iowa Speedway. He’s the first driver to finish last in two of NASCAR’s top three divisions on the same weekend at the same track since Josh Wise swept the Cup and XFINITY races at Texas in 2016.

Yeley also holds the unique record of being the first NASCAR driver to score at least one last-place finish in all three of NASCAR’s top divisions in the same season, which he accomplished in 2011. After his weekend in Iowa, Yeley is now one Cup Series last-place run away from matching that feat this season. In addition to running a partial Truck Series effort for MB Motorsports and a full XFINITY Series season for RSS Racing, Yeley has already made three Cup starts for Premium Motorsports and the NY Racing Team.

On Friday, Yeley picked up the 5th last-place finish of his NASCAR Camping World Truck Series career in Saturday’s M&M’s 200 at the Iowa Speedway when his #63 Fr8Auctions.com Chevrolet fell out with brake issues after 19 of 200 laps.

The finish, which came in Yeley’s 32nd series start, was his second of the year and first since Charlotte, two races ago. In the Truck Series last-place rankings, it’s the 20th for the #63, the 24th by reason of brake trouble, and the 352nd for Chevrolet. Across NASCAR’s top three series, it’s the 37th for the #63, the 152nd for brake issues, and the 1,604th for Chevrolet.

Yeley didn’t participate in opening practice, then ranked 26th of the 33 in Happy Hour. He qualified a solid 25th, just missing out on advancing to the second round with a lap of 129.125mph (24.395 seconds). Yeley was edged for the final spot in Round 2 by Jordan Anderson’s owner-driver effort by a difference of just 0.038 second. It was the best qualifying run of the season for MB Motorsports’ #63, and the team’s best starting spot in any race since Chris Windom rolled out 25th last year at Homestead.

With 35 drivers entered, three teams missed the race. First was Josh Reaume, who failed to qualify for the first time since this year’s Daytona opener in the #33 Colonial Countertops Chevrolet. Bryant Barnhill was set to make his series debut in Mike Harmon’s #74 Barnhill Realty Chevrolet, but also missed the cut. Coming the closest was Monster Jam competitor Camden Murphy, whose #0 Driven2Honor.org Chevrolet for Jennifer Jo Cobb Racing had trailed three of the last six Truck Series races in Iowa with Chris Lafferty and Caleb Roark.

Starting last in Saturday’s race was Bobby Reuse, the second different driver in as many races to race in place of Robby Lyons in Premium Motorsports’ #15 Chevrolet. Reuse brought with him sponsorship from WCIParts.com, which also backed him when he drove for Mike Harmon’s XFINITY Series team. Reuse had turned in the slowest lap in qualifying with a lap of 120.362mph (26.171 seconds), but secured his spot thanks to the #15 team’s Owner Points.

Joining Reuse at the rear was Cory Roper, back in the series for the first time since his debut at Martinsville. Roper’s family-owned #04 Preferred Industrial Contractors Ford was sent back due to unapproved adjustments.

By Lap 4, Yeley had gone down a lap to the leaders, taking last place. Also coming into the pits in 31st was Ross Chastain, who was making his first Truck Series start since last year at Kentucky. On top of his full-time XFINITY effort for JD Motorsports and running most of the Cup schedule in Premium Motorports’ #15 Chevrolet, Chastain looked to make his first Truck Series start since last year in Kentucky. This time around, he took the place of Todd Peck in the Beaver Motorsports #50 tied for the LASTCAR Truck Series lead. The truck carried sponsorship from VIP Racing Experience, which has also backed Chastain’s Cup teammate Reed Sorenson in the #55.

On Lap 5, Yeley was on the track two laps down, dropping Chastain, still on pit road, to last. By Stage 2, Chastain would return to action 38 laps down while Yeley went to the garage area, this time done for the day. This allowed Chastain to climb past Yeley and then 30th-place Joe Nemechek, who had parked his #87 Romco Equipment / D.A.B. Constructors Chevrolet. Chastain ended up turning six more laps than Nemechek before settling for 30th.

Finishing 29th was Todd Gilliland, whose #4 JBL / Sirius XM Toyota was involved in two separate wrecks, ultimately retiring after he completed 102 laps. Rounding out the group was Reid Wilson, making his first start since Martinsville. Wilson drove a new third entry from Young’s Motorsports, but the #12 TruNorth Chevrolet only made 109 laps before overheating issues.

The next day, Yeley picked up the 4th last-place finish of his XFINITY Series career in Saturday’s Iowa 250 presented by Enogen at the Iowa Speedway when his unsponsored #93 RSS Racing Chevrolet fell out with a vibration after 21 of the race’s 250 laps.

The game of musical chairs at Rod Sieg’s team RSS Racing continued into the Iowa weekend with Yeley taking the wheel of Jeff Green’s #93 Chevrolet for the first time since Las Vegas. Green would return to Yeley’s #38, which the Phoenix native earned his season-best 11th-place finish at Talladega, while Ryan Sieg remained in the flagship #39. While all three RSS cars lacked primary sponsorship, Sieg looked to improve on his career-best runner-up finish to William Byron in this event last year.

On Saturday morning, Yeley began his weekend strong with the 18th-best lap in opening practice, besting Sieg (23rd), and Green, who did not turn a lap. Yeley was the only driver to not participate in Happy Hour, where Sieg led the group in 21st with Green in 27th. The session was topped by the #61 NETTTS Ford of Kaz Grala, whose fourth and final scheduled start for start-up Fury Race Cars LLC continued to yield impressive results.

With exactly 40 cars entered for 40 spots, no teams were sent home. This proved fortunate as two Cup Series operations both required provisionals to start in the final row. The 39th starting spot went to Christopher Bell in Joe Gibbs’ #20 Rheem Toyota while 40th and last went to Ryan Reed in Roush-Fenway Racing’s #16 Drive Down A1C / Lilly Diabetes Ford. Bell was unable to turn a qualifying lap due to lengthy adjustments made during the session while Reed’s car didn’t clear technical inspection in time. Reed took the last spot as the #16 trails the #20 in Owner Points.

Prior to the start, Bell and Reed advanced ahead of four other drivers sent to the rear for pre-race penalties. Ryan Sieg’s #39 had to surrender the 21st spot due to unapproved adjustments, as did Matt Tifft’s #2 Wastebits Chevrolet. Tire changes sent back B.J. McLeod on JD Motorsports’ #15 Chevrolet and Talladega last-placer Spencer Boyd in the #76 Grunt Style Chevrolet.

The Bottom Five filled during the race’s early moments. Yeley turned two more laps than he did the previous day, his day over after 21 circuits. Seven laps later, Morgan Shepherd pulled behind the wall in his #89 Visone RV Chevrolet, citing brake trouble. Three circuits later came fellow owner-driver Mike Harmon, back behind the wheel of his #74 Chill by Koolbox Chevrolet. 37th went to Timmy Hill, who brought back Motorsports Business Management’s third team, the #13 OCR Gaz Bar Toyota, for the first time since Dover. Rounding out the group with his first Bottom Five of 2018 was Josh Bilicki, who had a busted fuel pump on JP Motorsports’ #45 Prevagen Toyota.

LASTCAR STATISTICS
*This marks the third-consecutive last-place finish for the #93 in an XFINITY Series race at Iowa. Jeff Green swept both races last year with the same team, including his 100th XFINITY Series last-place run in July. 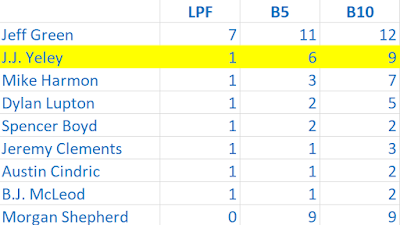