XFINITY: Jeff Green builds on another last-place streak at Pocono

Jeff Green picked up the 108th last-place finish of his NASCAR XFINITY Series career in Saturday’s Pocono Green 250 Recycled by JP Mascaro & Sons at the Pocono Raceway when his unsponsored #93 RSS Racing Chevrolet fell out with brake issues after 4 of 100 laps.

Green reprised his role as the third teammate at RSS Racing, joining Ryan Sieg in the #39 KMB Plumbing & Electrical Chevrolet and J.J. Yeley in the unsponsored #38. Green ranked 30th of 38 in Friday’s opening session, then was the only driver who didn’t take laps in Happy Hour. He then turned in the 33rd-best lap in qualifying with a lap of 151.914mph (59.244 seconds). This was just good enough for Green to make the field on speed instead of relying on the Past Champion’s Provisional.

The only driver to miss the field was Morgan Shepherd, who Green bested by just under seven-tenths of a second for the final spot on speed. As the lowest-ranked in Owner Points of the drivers needing provisionals, Shepherd was bumped from the field by Mike Harmon, whose #74 Horizon Transport Chevrolet was just under a second slower than Shepherd. Incidentally, the composite body on Shepherd’s #89 VisOne RV Chevrolet carried a slightly different variation on its paint scheme. It was all black without a gold roof or its red stripe along the bottom of the car.

Joining 40th-place starter Harmon for the start of Saturday’s race was rookie Alex Labbe, whose #36 Can-Am  / Wholey / Cyclops Gear Chevrolet had serious splitter issues in qualifying. Adjustments to the nose of the car constituted unapproved adjustments, and Labbe was sent to the rear prior to the start by NASCAR rules.

Also falling back were Jeff Green, who along with Timmy Hill voluntarily fell to the back before the start. Hill qualified alongside Green in 34th, driving the #66 OCR Gaz Bar Dodge fielded by Motorsports Business Management. Hill added an additional “sponsor” to his car on Friday from FilterTime.com, an air filter delivery business started by released XFINITY Series driver Blake Koch. Looking to help a friend, Hill put Filter Time’s name on a strip of orange tape near the front edge of the hood.

At the end of the first lap, Mike Harmon retook the 40th spot, four-tenths of a second behind new 39th-place Matt Mills, returning to JD Motorsports’ #15 Chevrolet, and 9.306 seconds back of the leader. The gap widened to 12.713 back of the lead at the end of Lap 2. At the end of Lap 3, Matt Mills had passed Brandon Hightower, who was steadily losing positions after his #55 Timmons Truck Center Toyota was lifted from 38th by the three cars that fell to the rear. Harmon still held 40th that time by, now 16.756 seconds back of the race lead.

At the conclusion of Lap 4, MRN Radio reported that Green, who had climbed to 29th, was now running “a snail’s pace” as he pulled onto the access road heading to the pits. Green made it there under power without drawing a caution, and became the first driver to pull behind the wall. He inherited last from Harmon, who continued on, now 22.143 seconds back of the leader. Seven laps later, Timmy Hill pulled his Dodge behind the wall, citing overheating issues. Hill slipped to 39th past Alex Labbe, who lost a lap after an apparent unscheduled pit stop. Labbe recovered nicely to finish on the lead lap in 18th.

The rest of the Bottom Five was filled by two of the only three cautions for on-track incidents. 38th fell to Chase Briscoe, whose turn in the #60 Nutri Chomps Ford ended after Michael Annett broke loose, body-slamming the #60 into the outside wall off Turn 2. 37th-place Justin Allgaier was eliminated in a crash on the ensuing restart when his #7 Breyers 2 in 1 Chevrolet lost control down the Long Pond Straight, collecting the passing Christopher Bell in the #20 Ruud-Meier Supply Toyota. Contact between the two cars knocked both out of the race, handing Bell the 36th position.

Jeremy Clements earned a strong 15th-place finish on Saturday, his best performance since an 8th at Richmond, and tied with another 15th at Fontana for his second-best all season. Fellow underdogs Kaz Grala, Ryan Sieg, Joey Gase, and David Starr joined 18th-place Alex Labbe in filling out the Top 20. 19th-place Gase now has three consecutive top-twenty finishes for Go FAS Racing. Starr has back-to-back 20th-place finishes for Jimmy Means Racing. Grala’s new ride at Fury Race Cars has run no worse than his 16th on Saturday. And 17th-place Ryan Sieg has just one finish outside the Top 20 since Phoenix.

LASTCAR STATISTICS
*Green continues still another impressive last-place streak, having trailed every other XFINITY Series race since last fall at Homestead. He now stands at 7-of-13.
*Green has now finished last in two of the three XFINITY races held at Pocono. The inaugural 2016 event was trailed by Matt DiBenedetto. 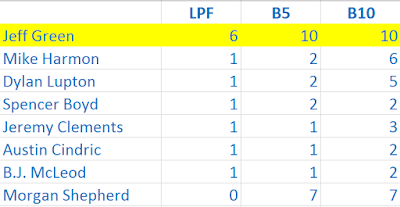