XFINITY: After Saturday, Darlington stands as only XFINITY track where Jeff Green has not finished last

Jeff Green picked up the 109th last-place finish of his NASCAR XFINITY Series career in Saturday’s LTi Printing 250 at the Michigan International Speedway when his unsponsored #93 RSS Racing Chevrolet fell out with a vibration after 5 of 91 laps.

Green was set to be one of 41 drivers entered in Saturday’s race. That list shrank by one on Thursday, when JGL Racing withdrew the #28 Fatal Clothing Ford after driver Dylan Lupton parted ways with the team. Just 37 of the remaining 40 drivers turned laps in Friday’s opening practice with Green 35th overall, ahead of Talladega last-placer Spencer Boyd and Josh Bilicki. Green did not participate in Happy Hour, and a washed-out qualifying session secured him 31st on the grid with the Past Champion’s Provisional.

With the remainder of the field set by owner attempts, the 40th starting spot fell to Kaz Grala, whose new ride at Fury Race Cars LLC was making its third of four planned starts in the #61 NETTTS Ford. However, according to a video posted by the speedway, five other drivers had fallen to the rear, lifting him to 35th as he took the green.

Last at the stripe went to Morgan Shepherd, scheduled to start 39th in the #89 VisOne RV Chevrolet that failed to make last week’s race at Pocono. Shepherd received one of the day’s three tail end penalties, his for unapproved adjustments. The other two went to Chad Finchum, his #40 Smithbilt Homes Toyota slated to start 36th before an engine change, and 9th-place starter Justin Allgiaer, for unapproved adjustments on the #7 Brandt Professional Agriculture Chevrolet.

On Lap 6, Shepherd was still in last, 14.278 seconds back, when Green surrendered the 37th spot under green to pull behind the wall, done for the afternoon. Shepherd turned 34 laps before he exited the race with brake problems for a 38th-place finish. Between the two came Joey Gase, whose #35 Sparks Energy, Inc. Chevrolet fell out with overheating issues. It’s Gase’s worst finish of the season since a 33rd at Daytona.

Crashes filled the rest of the Bottom Five before rain shortened the event. 37th-place Alex Labbe, Gase’s teammate at Go FAS Racing, spun to the inside of Turn 1, ripping the splitter and much of the front clip from his #36 Can-Am / Wholey / Cyclops Chevrolet. Labbe made it to pit road, only to fall out. This gave both Go FAS Racing teammates their first Bottom Five runs of 2018.

Rounding out the group was Matt Mills, who lost a tire in Turn 1 and pounded the outside wall in JD Motorsports’ #15 Flex Glue Chevrolet. After a few anxious moments, Mills climbed from the car under his own power. 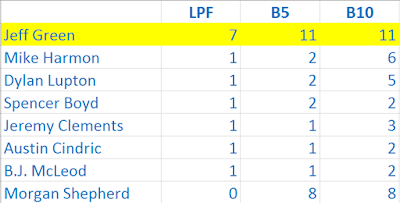 So I have the feeling that I may witness history for the 2nd time this yr when I attend the race at Darlington. Very Interesting!