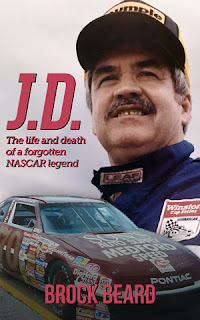 On Wednesday, I announced that I would be selling and signing copies of my upcoming book “J.D.: The Life and Death of a Forgotten NASCAR Legend” during the NASCAR weekend at Watkins Glen, August 3-5.

The deal, which came together earlier this year, was worked out with the track’s International Motor Racing Research Center, which puts on a yearly display in the infield. I had an agreement with the IMRRC, had been told where I would be signing my books, and had agreed to donate a share of my profits to the museum. All travel arrangements and preparations had been made prior to my announcement on Wednesday.

On Friday, I was informed by the IMRRC that I would no longer be allowed to sell books at the track that weekend. Someone at Watkins Glen International told the IMRRC that my signing “will be a major problem for everyone involved” due to the track’s existing merchandising agreements. These problems were not told to me, nor raised by anyone, at any point prior to then.

To avoid any conflict between the track and the IMRRC, I decided not to object. So I will not be signing or selling books at Watkins Glen. Wednesday’s post has been removed in place of this one, and I have updated both of my social media accounts about the cancellation.

While I strongly disagree with what happened, I nevertheless thank the IMRRC for their offer and their contributions to the book itself. I still hold out hope that we can work together in some other faculty at a later date.

So, what happens now? Well, I’m still going to be in Watkins Glen this August – the money’s already been spent and the books purchased (plus a weekend ticket for my brother to come to the track). So here are two things I’m working on.

First, I am looking into getting credentialed for the Watkins Glen weekend for LASTCAR.info. Again, I would not be selling or signing copies at the track – I would only be there to cover the weekend’s events. If this goes through, I will provide similar last-place coverage to my upcoming work at Sonoma next week.

Second, myself and my contact in New York are looking into other book signings in upstate New York away from Watkins Glen International. If and when we are able to get new signings set up, you readers will be the first to know.

To you readers, I share your disappointment and frustration, and I’m sorry that this has happened. I had hoped that this signing would be an opportunity to share an important chapter of NASCAR’s past at the place where it happened. I am saddened that the track did not see it that way.

Much like McDuffie’s racing career, the work to bring his story to life has been a grassroots effort, and myself and the staff at Waldorf Publishing have been working hard to exceed expectations. We will continue to do so.

This is not the finish line, folks. This is only the beginning.
Posted by Brock Beard at 9:31 PM

NASCAR at its shittiest. God forbid people know or remember that JD died at their track. So stupid.