INTERVIEW: Parker Kligerman averts near-disaster at the end of final practice at Sonoma 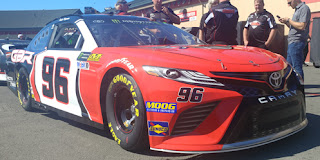 Parker Kligerman had never before seen the Sonoma Raceway before he stopped at the track on his way to the hotel Thursday night. This Sunday, he'll make his first Toyota / Save Mart 350 driving the #96 Toyota fielded by Gaunt Brothers Racing. In the closing stages of Friday's second practice session, Kligerman's car unexpectedly stopped near pit entrance, and Clint Bowyer, Kevin Harvick, and Cole Whitt narrowly avoided a collision. We caught up with Kligerman after that session.

WHAT HAPPENED WITH YOU AND THE NO. 34 AT THE END OF HAPPY HOUR?
KLIGERMAN: “Dude, I was coasting around and I didn’t hear anything about him really coming, I looked up in my mirror and saw him coming – I was coasting because we were on a mock run, it was 280 degrees so I was trying to keep the engine cool – and he’s just suddenly in my mirror so I darted to the inside to get out of his way and I guess I hurt his lap. He shoved me all the way to the right and I looked in the mirror and see it’s pretty clear so I just darted left, but the engine didn’t re-fire at the same time. Yeah, it was a bit of a calamity, and I’m just glad nobody got messed-up. Probably my fault entirely, like every facet of it, but it was just a comedy of errors that happens when you’re trying to get out of the way on a hot race track and, you know, I didn’t have any info he was coming, so I just kind of had to react, so I did.”

OTHER THAN THAT, HOW DID PRACTICE GO TODAY?
KLIGERMAN: “Solid. I felt we could’ve been – man, I just didn’t get everything on our mock run which was on new tires, and I only got one new tire run. So, I felt like I left easy like almost half a second on the track, and I confirmed it because I was on old tires at the end and on two-lap tires I was able to go the same speed. So, you’ve gotta think that’s at least half a second in just tires because they fall off so quickly. So, good speed and race runs we were decent, we’ll look at the averages now and see where we stack up. But, you know, for this team, young team, myself never being here – I’ve never even seen this place – we’re doing good things. We didn’t put up the big number on the board there, but they pay more tomorrow and obviously on Sunday. And I think obviously there’s a lot for me to learn – I’m just doing the best that I can as quickly as possible so I can learn it.

WHAT ARE YOUR GOALS FOR QUALIFYING AND THE RACE?
KLIGERMAN: “You know, I would love us to be Top 25. You know, if we could do that, we’re killing it, and we’d be beating some solid cars. And, you know, first practice we were like 28th, 29th, and we beat some good cars and I think some guys who’ve been here or at least are running the K&N race and I’m not getting any of that. So, I was pretty pumped about that. And then we got into this practice and I just didn’t get it all on that mock run and we fell back a little bit. But we get Top 25 and then run there in the race, I’d be really happy.

ANY OTHER PLANS TO RUN WITH THE GAUNT BROTHERS LATER THIS YEAR?
KLIGERMAN: “Yeah, you know, I thank everyone here at Gaunt Brothers Racing for giving me these opportunities these last two weeks. You know, it’s funny because, you know, doing the truck stuff part-time (for Henderson Motorsports) is going so well and obviously winning the race and running up front, and I think we can win a lot more races up there in that 75 truck, and probably should’ve won Dover this year. And I’ve come over here and it’s like starting back at square one (laughs). I feel like at times ‘damn, there’s so much to learn.’ So, it’s really tough. Cup is Cup. You’d think some of these back teams aren’t prepared, but they are, they do this for a living, so it means everything to them and so they race like it and prepare like it. So, you know, it might not look very impressive in the outside world, but it’s very hard. So, I think I have a massive appreciation for, you know, this part of the garage in Cup and Cup in general, but I’m getting better. So, hopefully, they’ll give me some more chances trying to get better.
Posted by Brock Beard at 5:24 PM