INTERVIEW: Derrike Cope on StarCom Racing's progress, Tomy Drissi, and the second half of 2018 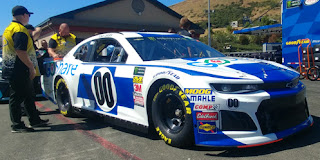 I spoke with Derrike Cope on Friday morning as the #00 GoShare Chevrolet went through inspection before opening practice at the Sonoma Raceway. The car will be driven this weekend by Trans-Am competitor Tomy Drissi, who last ran the NASCAR event here in 2014.

HOW DID THIS DEAL WITH TOMY DRISSI COME TOGETHER?
COPE: “You know, I’ve known Tomy for a long time. Done some testing with him and driver development and he’s just a friend. So, we called him and talked to him about putting together a deal to come here and run Sonoma and it’s just kind of a home week for me. I like having him around, he’s a proficient road racer, so we’re gonna have some fun this weekend.”

WHY NO MOVIE PROMOTION ON THE NO. 00, AS IN PREVIOUS DRISSI RACES?
COPE: “No, it was actually – I got Tomy on board first and then he worked with some things to try and put the funding together to support it. But yeah, it’s really about Tomy and our program here. I’m excited about our owners’ first opportunity, it’s a brand-new team, and their first opportunity to be here at Sonoma, so Matt and Mike Kohler, Bill Woehlemann (owners of StarCom Fiber), and Ashley-Marie Monica (Team Adviser), they’re just four great people we have on this team and I think they’re gonna enjoy having Tomy around this weekend.”

WILL TOMY RUN THE OTHER ROAD COURSES FOR YOU?
COPE: “Yeah, I think we’re looking into having some discussions, you know, just taking one race at a time, you know, just trying to get through here and we’ll see how things go and see what he feels like how the equipment runs, and we’ll explore opportunities from there.”

HOW DO YOU SEE STARCOM’S PROGRESS THIS YEAR?
COPE: “I think it was a bit slow at the beginning just trying to get our legs under us. But we’ve come a long way in a short period of time. Certainly, Landon Cassill’s been very, you know, condusive to our program and trying to get us to where we have a stable fixture in the seat and some good input. And I think we’ve made some in-roads in the suspension and the geometry side of the cars and finding some of the deficiencies we’ve had with some flexing and rear brake and chasses and so we’ve rectified those things and I think we’ve kind of found some footing, some solid footing, and we’re being relatively consistent right now. So, obviously the road courses are an anomaly and different scenarios, so we’ll get through this one here and see how we fare.”

“But looking forward to getting the second half of the year going – obviously Daytona is looming and we’ll have good opportunity to have good feedback down there with ECR engines. So we’re excited and we’ll see how the second half of the year starts to stack up. But right now, I’d have to say we’re doing relatively well. We’ve overachieved in a couple of races. But certainly with the group that we’re racing towards the back, we seem to be kind of holding our own.”
Posted by Brock Beard at 1:32 PM