The finish came in Peterson’s 103rd series start and was his second consecutive, third this year and fourth in a row in races Peterson has driven in.

Wayne Peterson is one of ARCA’s longest-lasting and most polarizing underdogs. His cars are routinely found near the tail-end of the field, yet those cars kept showing up week after week, year after year. Peterson has fielded cars for a multitude of drivers, some of the most notable being James Harvey Hylton, Mike Harmon and frequent LASTCAR focus Mike Senica. Even Brad Keselowski made a start for the team in 2004.

The gap in that race from Keselowski to the winner back then was two laps, but with the introduction of composite-bodied cars, the gap has grown larger. This has led to some entities calling for slower cars to not show up to race. Although those movements have never gained traction, they still pop up occasionally, like on Twitter during Thursday’s race. Nevertheless, the team soldiers on, entering two, sometimes three cars a race, one normally being the team’s only composite-bodied car, acquired just before Daytona this year.

Originally, Peterson was slated to drive the #1 car, a collaboration between his team and Andy Hillenburg’s Fast Track Racing. That changed by race day, when the team’s Twitter account had this to say:


Practice for tonight race is going on now! Helping out the 23 boys this week. pic.twitter.com/nABPSYSdk8
— Wayne Peterson Racing (@Arcafan06) June 28, 2018

Bret Holmes’ #23 had withdrawn for re-organizational purposes, similar to Stewart Friesen’s break in summer of last year in the Camping World Truck Series. That left 27 cars, with Peterson’s composite body taking on stylized #23 decals. Eric Caudell and Hixson Motorsports returned, as well as Cody Rohrbaugh and his #7 team in their last announced start of the season. Jesse Iwuji and Thomas Praytor teamed up to field the 9 car, and Zach Ralston returned in his steel-body in the #11 machine. Towards the front of the field, Austin Hill came seemingly out of nowhere to join MDM Motorsports and Venturini Motorsports debuted their much-anticipated three-female lineup with Natalie Decker, Leilani Munter and Toni Briedinger.

Soon, the 23 became a fixture at the bottom of the leaderboard. Peterson anchored practice with just about a 40-second lap, two and a half seconds slower than Jesse Iwuji’s next-slowest lap. The 23 was one of two cars, along with Will Rodgers’ #52, to not make a lap in qualifying. It then lined up tail-end for the race and pulled off the track coming to the green, citing brake issues.

Peterson's teammate Mark Meunier pulled off after five laps with an oil leak, followed closely by Iwuji, whose bad-luck streak in ARCA competition continues, as he has only finished under power once in six starts this year. His lone remaining race is the season finale at Kansas. Mike Basham cited a vibration on his machine, and Con Nicolopoulos had engine problems to round out the Bottom Five. 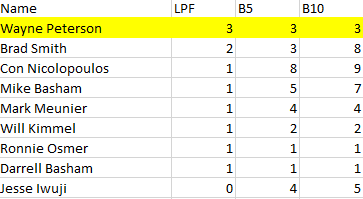