The finish came in Basham’s 379th series start, and was his first since last fall at Salem, twelve races ago.

Basham has been around the racing scene for decades, so long that Racing-Reference.info doesn’t have all of his ARCA stats (the tally of nine last-place finishes only goes back to 1985). He has made his family’s #34 entry iconic in ARCA circles, and the yellow car still runs this season with his son Mike behind the wheel. Darrell also made a quick foray into NASCAR, driving for Jim Patrick at Nashville in 1979. He fell out after completing 101 laps, and never ran another NASCAR national series race.

Basham did, however, run the full ARCA circuit from 2002 to 2012, becoming good friends with the late James Harvey Hylton along the way. After 2012, Darrell scaled back on the driving, making only sporadic races while his sons took over driving duties. He has returned occasionally, most recently last fall at Salem, driving for Hixson Motorsports. He hinted at a possible return at Nashville earlier this year, but handed the car off to Mike.

How did Basham wind up in the 69 car last week? The partnership actually started earlier this year at Pocono. Jesse Iwuji was campaigning the 34 as part of his slate of races this year, so Mike transferred over to the 69 as a start-and-park. Now, with Will Kimmel focusing on his street stock efforts, Darrell stepped into the 69 for the Madison race.

The Madison race, on paper, looked to be both exciting and disappointing. Only 19 cars were entered, the lowest in recent memory. Several factors indicate that this is rock bottom for the ARCA Racing Series. Mainstay teams Ken Schrader Racing, Hixson Motorsports and DK-LOK Racing didn’t file any entries. Other mainstays that normally enter multiple cars, like Wayne Peterson Racing, Chad Bryant Racing and Mason Mitchell Motorsports only entered one car. And not a single entry for Friday’s race has plans to run less than half the schedule. That’s right - no family teams or part-time efforts decided to show up. On the other hand, a solid dozen of those nineteen cars had a legitimate shot at a win or podium, led by usual heavyweights MDM Motorsports and Venturini Motorsports, entering four cars apiece. Toni Briedinger and Tommy Vigh Jr. made debuts, the former for Venturini and the latter for Fast Track Racing.

Only fifteen cars took a time in first practice. Local driver Dick Karth from nearby Grafton, Wisconsin was last of the fifteen, nearly three seconds off of Chandler Smith, who would remain a fixture at the top of the leaderboard for the remainder of the day. Later in the day, only sixteen cars took time in qualifying, and of the three that did not take time, the #11 machine of Karth lined up last on the grid.

The race at Madison was the start of a new era for ARCA: new PR man Charles Krall debuted, replacing another mainstay, Don Radebaugh. Krall, unintentionally, was much more tail-end oriented than Radebaugh (though we at LASTCAR do wish Mr. Radebaugh the best in his future endeavors). Krall made two updates on the last-place battle: The first, before the race started, when Mike Basham needed a push to get started. The second was when, after Brian Eberly tweeted out that Darrell Basham and Karth had both turned in after a lap, the reasons for failing to finish were listed: Basham had clutch issues and Karth retired with overheating problems.

The Bottom Five did not fill out until the end of the event, a rarity for ARCA races. Wayne Peterson Racing driver Con Nicolopoulos bowed out with handling issues after 31 laps, and Mike Basham retired because of oil problems past the midway point. Vigh Jr. was the last car running, eighteen laps down after multiple spins in what proved to be a rough debut. 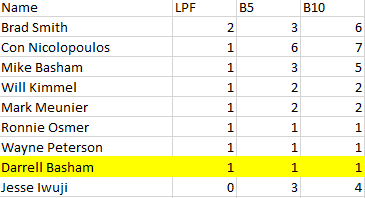